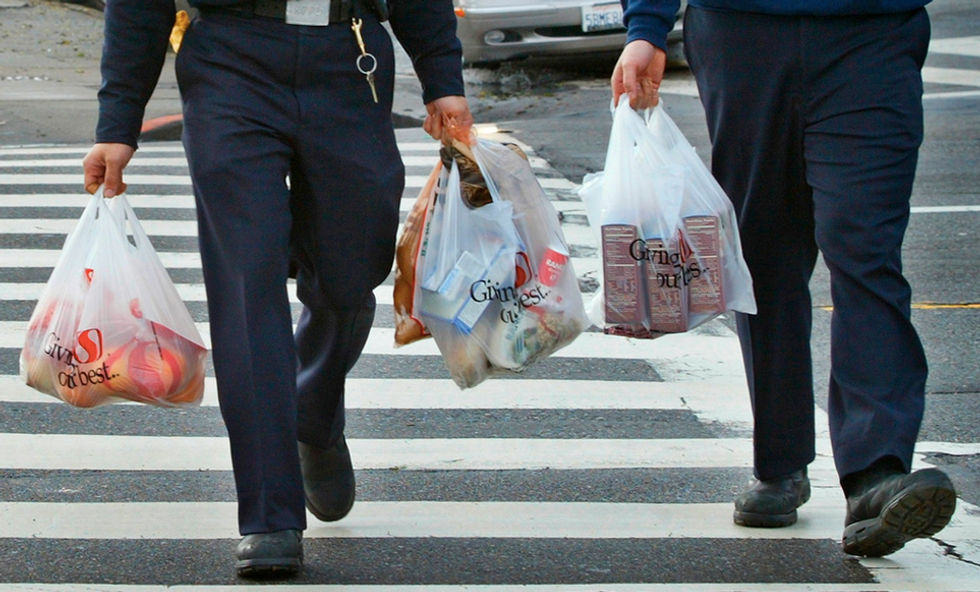 [image of firemen carrying plastic bags in CA via Reuters]

Carry your own cup to the coffee shop. Recycle that soda bottle. Say no to straws.

The growing global crisis of plastics waste is often framed as a problem stemming from careless consumers, but a new bill introduced in the US Congress Tuesday seeks to shift the responsibility back to industry.

The proposed "Break Free From Plastic Pollution Act," introduced by Democratic lawmakers, would be the most ambitious regulation the US plastics industry has ever seen.

It would require producers to collect and recycle their own waste, create a nationwide drink container refund scheme and phase out certain single-use plastic items.

Permitting of new plastic production would be paused for up to three years under the proposal.

But it has little chance of passage in the Senate where a Republican majority opposes curbs on an industry that generates about $400 billion in sales and maintains almost a million manufacturing jobs.

"The plastics industry has convinced everybody if you put your (recycling) bin out on the corner, you've done everything you can do," Democratic Senator Tom Udall of New Mexico, one of its co-sponsors, told AFP. "We needed the industry to change the whole model."

For decades, the industry has sponsored initiatives to encourage consumers to leave their plastics out for recycling in blue bins.

GETTY IMAGES NORTH AMERICA/AFP/File / KEVORK DJANSEZIAN The growing global crisis of plastics waste is often framed as a problem stemming from careless consumers, but a new bill introduced in the US Congress seeks to shift the responsiblity back to industry

Yet the United States recycles only around eight percent of its plastic waste each year, with the rest -- some 32 million tons -- landfilled, incinerated or shipped overseas to other countries that are poorly equipped to handle it.

That's representative of the global history of plastic itself: 90.5 percent of the 6.3 billion metric tons of plastic waste that has accumulated since the man-made material was first produced in the 1950s until 2015 has never been recycled.

AFP/File / MANDEL NGAN Senator Tom Udall says that while his plastics bill was unlikely to become law soon, it is intended as a model "so that when we have an administration and a Senate that's more receptive, that we can get something done"

The bill would require producers of certain plastic products to design, manage and finance programs that collect and process product waste -- normally the purview of state and local governments.

Beginning in 2022, they would have to phase out many single-use items like carryout bags, and polystyrene containers.

It would also create a 10-cent national refund program for all beverage containers, schemes that have proved highly successful at the state level.

Alan Lowenthal, a congressman from California and another co-sponsor, told reporters he was especially proud the bill would prevent plastic waste being exported to less developed countries where it ends up in landfills and waterways, harming human health and endangering wildlife.

But perhaps most ambitiously, it would place a hold on new plastic production, which the oil and gas industry sees as its next growth area as demand for fossil fuel energy tapers down in the coming decades.

Global plastic production is set to triple by 2050, accounting for 20 percent of global oil consumption, according to an estimate by the World Economic Forum.

That makes it a growing climate issue too.

A report for the Center for International Environment Law found that in 2019, the production and incineration of plastic pumps more than 850 million metric tons of greenhouse gases into the atmosphere — equal to the emissions of 189 coal power plants generating 500 megawatts each.

Mark Spalding, CEO of the Ocean Foundation, told AFP the bill was the result of a growing public push, with consumer-led boycotts or local-level bans of items like straws, plastic bags and polystyrene cups helping to raise new levels of awareness.

AFP/File / Justin TALLIS For decades, the industry has sponsored initiatives to encourage consumers to leave their plastics out for recycling in blue bins -- but in reality only a small fraction of this is recycled

He added the bill signified a relatively new policy approach, known as "extended producer responsibility" that the European Union has taken a lead on with its ban on certain single-use plastic items by 2021. Canada has announced a similar move.

"This bill would finally tackle the plastic crisis at its source by reducing the amount produced in the first place, and encouraging a shift to refillable and reusable alternatives," added Jacqueline Savitz, chief policy officer of Oceana, a non-profit ocean conservation organization.

But it was denounced by the Plastics Industry Association, which lobbies for the industry and has a political action committee that contributes to lawmakers' election campaigns -- overwhelmingly to Republicans.

"The title of this bill suggests it is more interested in garnering headlines than it is in finding solutions," said the group's President Tony Radoszewski.

"Furthermore, this legislation's efforts to shut down plastics manufacturing would hurt the nearly one million hard-working men and women in our industry and the nation's economy as a whole."

Udall told AFP that while his bill was unlikely to become law soon, it was intended as a model "so that when we have an administration and a Senate that's more receptive, that we can get something done."