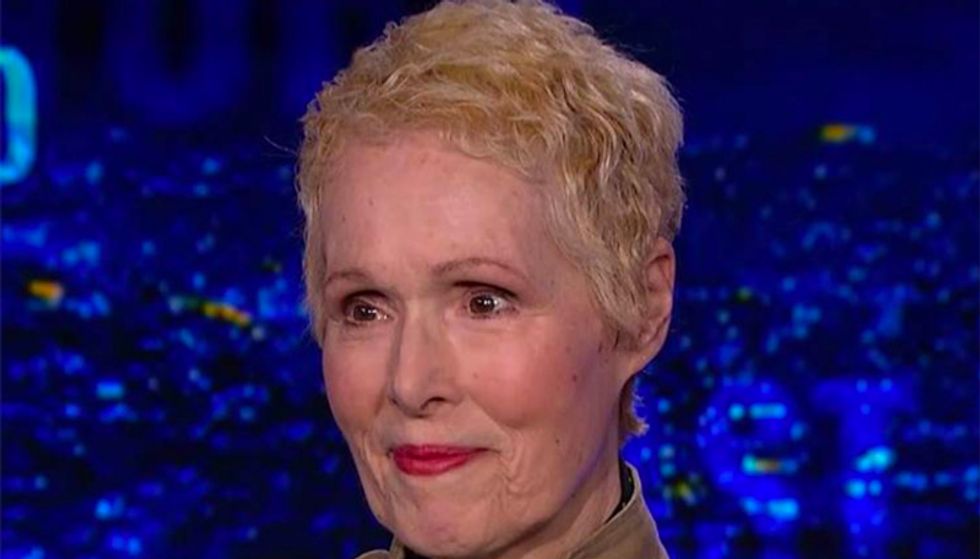 Women's rights advocates came to the defense of longtime columnist E. Jean Carroll Wednesday after she revealed she was fired from Elle magazine months after coming forward with sexual assault allegations against President Donald Trump.

Carroll claimed her dismissal from her job as an advice columnist for the magazine, where she worked for more than two decades, came as the result of Trump's attacks on her following the accusation.

"Because Trump ridiculed my reputation, laughed at my looks, and dragged me through the mud, after 26 years, Elle fired me," Carroll tweeted after her firing was reported by news outlets. "I don't blame Elle... I blame Donald Trump."

Last June, Carroll wrote in a New York magazine article that the president raped her in a department store dressing room in the 1990s. Trump denied the allegation, saying he didn't know Carroll despite photographic evidence that they had met, claiming she was not his "type," and calling her a liar.

In November, Carroll filed a defamation lawsuit against Trump. Summer Zervos, a former contestant on "The Apprentice," filed a similar suit against the president in 2017 after accusing him of assaulting her.

According to the New York Times, in a court filing in December Carroll's lawyer wrote that her client had lost her job as a result of Trump's defamation. The lawyer also moved to block Trump's attempt to have the case delayed until the New York Court of Appeals determines whether a sitting president can legally be sued—a ruling that may not be handed down until after the general election in November.

If Trump is unable to delay the case, he may have to provide a DNA sample, which Carroll has sought for months to bolster her claims.

On social media, supporters of Carroll condemned Elle's decision to fire her while she is facing attacks on her character from the president.

"In the end, a magazine for women chose the man," tweeted political scientist Rachel Bitecofer.

Others accused the magazine of being on the wrong side of history and of joining the ranks of many organizations throughout history which have retaliated against sexual assault and harrassment survivors for coming forward.

This is a terrible move on the part of @ELLEmagazine. @ejeancarroll raised generations of us who are now the ones b… https://t.co/0MBIamXjuF
— Amee Vanderpool (@Amee Vanderpool) 1582116106.0

After @ejeancarroll publicly accused Trump of raping her, he smeared her reputation and @ELLEmagazine fired her aft… https://t.co/Q7aDmrP4jr
— Minh Ngo (@Minh Ngo) 1582152432.0

We all — especially ANY and EVERY magazine claiming to be in support of women — should be standing behind E. Jean C… https://t.co/bpk0SN0sj7
— Carrie Courogen (@Carrie Courogen) 1582083202.0

"Any and every magazine claiming to be in support of women—should be standing behind E. Jean Carroll," tweeted journalist Carrie Courogen. "This is so incredibly disheartening."