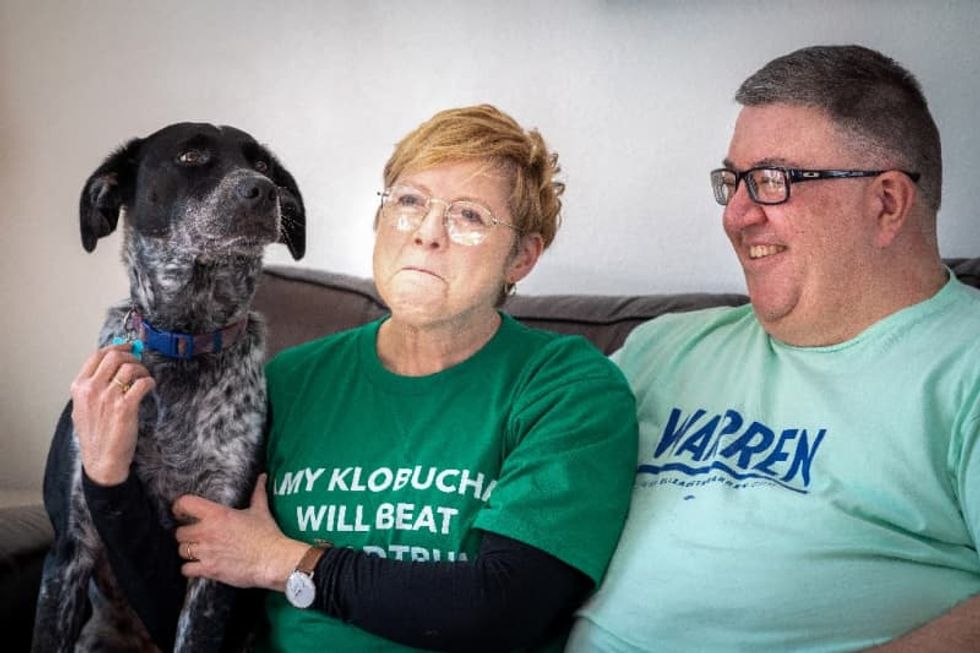 The signs planted in the snow-covered yard outside their Iowa City home announce the clashing priorities of those living inside: Rod Sullivan and Melissa Fath support opposing candidates in the Democratic presidential vote to be held Monday in their Midwestern state.

With the vote drawing near, the amiable but politically active couple have little time to chat.

Each has donned a T-shirt in the colors of his or her favored candidate while preparing to go knocking on neighborhood doors in hopes of winning undecided voters over to their camp.

Sullivan, 54, currently the chairman of the Johnson County Board of Supervisors, supports progressive senator Elizabeth Warren.

Fath, also 54 and a cancer researcher at the University of Iowa, backs centrist senator Amy Klobuchar.

Warren and Klobuchar recently won the support -- in an unprecedented joint endorsement -- of the New York Times.

The couple laughingly explain that their situation is rare even in Iowa, whose inhabitants are particularly passionate about politics since their first-in-the-nation vote carries outsized importance.

"I think what makes it even a little bit more unique is the fact that we both work pretty hard for our candidates," Sullivan said.

Iowa City, a university town of 75,000, is something of a progressive enclave in a state that voted for Donald Trump in 2016.

On a chilly morning, Sullivan sets out to go door-to-door in one of the last neighborhoods not yet reached by the many volunteers working for Elizabeth Warren, who stands fourth in the latest Iowa polls.

After getting no answer at several homes, Sullivan finally gets lucky: a young woman answers the door and announces that she has decided to back Warren... based on the results of an online questionnaire she had taken.

Fath has more homes to visit: Klobuchar, in fifth place with the backing of less than 10 percent of those polled, has fewer volunteers, so they have much more ground to cover.

But she, too, finally strikes gold: someone supporting Klobuchar.

"Anyone but an old white guy," laughed Maria Watt, 42.

The couple, together since 1996, found themselves in agreement only once before at this stage in a primary election season: both supported Barack Obama during his 2008 campaign.

In 2016, Sullivan was one of the first elected officials in the country to declare his support for independent senator Bernie Sanders. After a long and sometimes bitter battle for the Democratic nomination, the Vermont socialist finally lost to Hillary Clinton, who was Fath's choice.

Four years later, Warren gratefully recognized Sullivan at an Iowa City rally as one of the first elected officials -- this time around -- to back her.

Why did he turn his back on Sanders? "Senator Warren has a lot of the same ideas but has a little bit more thought-out plan," Sullivan said. "Plus, I think it would be great to have a female president."

"I think that's what our country needs right now, because we need a Band-Aid on the division" after the polarizing presidency of Donald Trump, she said.

Both Fath and Sullivan did vow to support whichever candidate the Democratic Party finally selects to face Trump in the November 3 election.

But this weekend, with Monday's vote drawing near, they both continued to campaign, even within their own family.

Sullivan's mother has promised to support Klobuchar, Fath said, as has the only one of the couple's three children who will vote in Iowa.