'It's a trap!' CNN's Avlon has a theory that explains why Trump keeps pumping up Bernie Sanders 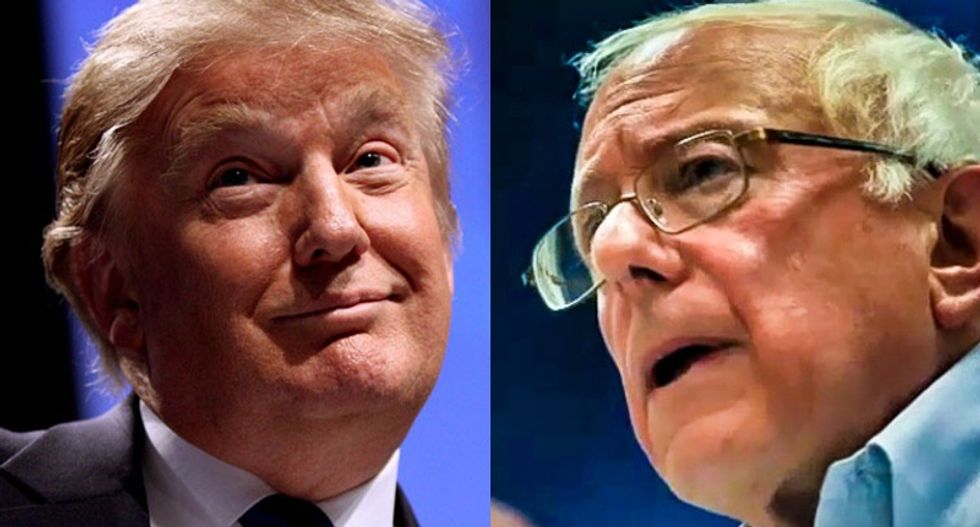 "It turns out a very unlikely fan of Bernie Sanders is Donald Trump," said Avlon, playing a clip of Trump saying, "Bernie looks like he's doing very well ... people like his message."

Avlon added, "That's despite the fact that Bernie Sanders' message is—" and played a clip of Sanders saying, "We must, and we will, defeat the most dangerous president in the modern history of America."

"That hasn't stopped Donald Trump from consistently pumping up Sanders' chances," noted Avlon. "Another surprising Sanders defender is Donald Trump, Jr., who retweeted [an unflattering] video of Mike Bloomberg [also tweeted by] Bernie Sanders' people. And it's not the first time that Donald rushed to Bernie's aid, with both repeating the charge the Democratic primary is somehow rigged against him. Speaking of primaries, conservative radio host Hugh Hewitt went so far to announce that he would actually vote for Bernie, and that movement has picked up steam, with South Carolina Republicans pushing people to vote for Sanders in their primary."

"Why are they 'feeling the Bern'?" said Avlon. "Well, as Admiral Ackbar might say—" He then played the famous Star Wars clip of the Mon Calamari rebel leader shouting "It's a trap!"

"And the reason is the S-word. Socialism," said Avlon. "Donald Trump does best running against a hypothetical socialist, beating him or her by six points, but loses to top-tier Democrats, including Sanders, who actually calls himself a democratic socialist, in a recent CNN poll. According to Gallup, only 39 percent of Americans have a positive view of socialism. Gallup also found that more Americans would vote for a gay, Muslim or atheist candidate than a socialist. Meanwhile, a Quinnipiac poll finds less than a quarter of Democrats call themselves 'very liberal.' Democratic voters [are] more moderate, blue-collar, and older than you might think just by looking at Twitter."

"Given all of this, no surprise Donald Trump wants to run against Bernie Sanders," said Avlon. "But don't take my word for it. An unnamed Trump adviser told Axios, quote, 'we're trying to promote Bernie's rise. The campaign has been pumping up the national messaging behind Bernie ... When you attack his policies, it gets the media to talk about them.' This isn't subtle, folks."

"Sanders deserves credit for firing up the base and shifting the debate in the Democratic Party, but Team Trump understands their path to re-election will be demonizing Democrats as radical socialists, to distract from the president's broad unpopularity," said Avlon. "That's why they want to run against an actual radical and self-described democratic socialist, Bernie Sanders. It's a trap. And that's your reality check."