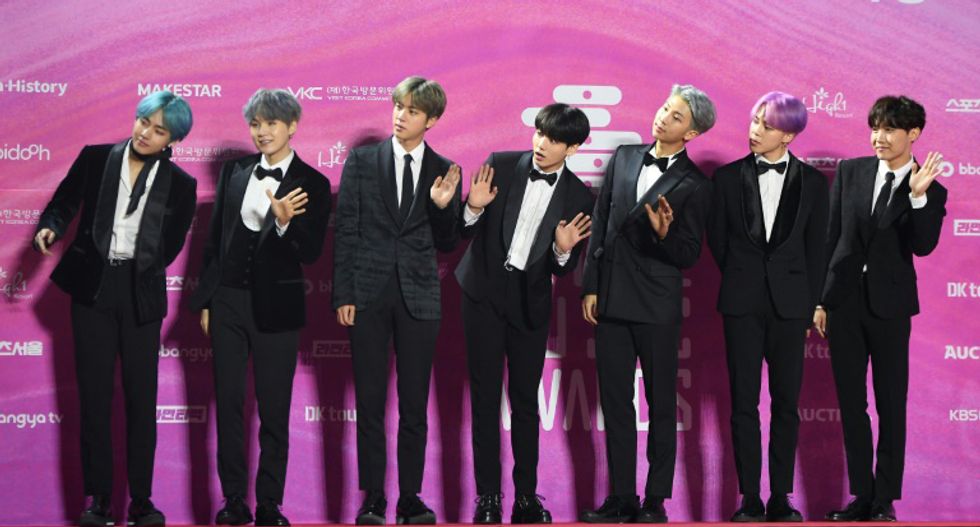 The BTS concerts are the latest events to be cancelled or postponed as the outbreak has spread in the world's 12th-largest economy. AFP/File / Jung Yeon-je

K-pop megastars BTS on Friday cancelled four Seoul concerts due in April as the number of novel coronavirus cases in South Korea passed 2,000.

The seven-piece boyband -- currently one of the biggest acts in the world -- had scheduled four gigs at the capital's Olympic Stadium to promote their new album, "Map of the Soul: 7".

More than 200,000 fans were expected to attend, their agency Big Hit Entertainment said in a statement, with "a number of global production companies and a large group of expert international crew" also involved.

It was "impossible at this time to predict the scale of the outbreak", it said, creating so much uncertainty it was "unavoidable" the shows were cancelled "without further delay".

"We must take into consideration the health and safety of hundreds of thousands of guests as well as our artists," it added.

The BTS concerts are the latest events to be cancelled or postponed as the outbreak has spread in the world's 12th-largest economy.

Among affected events are the K-league football season and the World Team Table Tennis championships, while museums and other public venues have closed.

The US -- which stations 28,500 troops in the country -- and South Korean militaries have also postponed forthcoming joint exercises over coronavirus concerns, with no resumption date set.

South Korea reported 256 new cases on Friday, taking its total -- the highest in the world outside China -- to 2,022, the Korea Centers for Disease Control and Prevention said.

More than 90 percent of the new cases were in Daegu -- the city at the epicentre of the country's outbreak -- and neighbouring North Gyeongsang province, it added, with the death toll remaining at 13.

South Korea's total is expected to increase further after checks began on more than 210,000 members of the Shincheonji Church of Jesus, a secretive entity often accused of being a cult, linked to around half of the nation's cases.

A 61-year-old female member developed a fever on February 10, but attended at least four church services in Daegu -- the country's fourth-largest city with a population of 2.5 million -- before being diagnosed.

"The next one week will be the tipping point," he said.

Daegu's streets have been largely deserted for days with many stores and restaurants temporarily closing, but face masks were becoming more widely available on Friday, AFP journalists saw.

Authorities have urged the public to exercise extra caution, advising citizens to stay home if they have a fever or respiratory symptoms.

But they say they are not considering putting the city in lockdown as China did for Wuhan, where the virus first emerged.

South Korea has an advanced medical system, a free press and a strong culture of public accountability, characteristics which observers say lie behind its comparatively high statistics: so far it has carried out more than 68,000 tests on suspected patients nationwide.

BTS -- or Bangtan Sonyeondan, which translates as Bulletproof Boy Scouts -- are the first K-pop group to top charts in the US and Britain.

Their latest effort was given a simultaneous worldwide release online last Friday, becoming the most pre-ordered South Korean album of all time, with more than four million copies sold before its release.

The coronavirus outbreak already forced them to livestream a press conference earlier this week, the seven members waving and bowing to a virtually empty hall, and urging fans to take care of themselves.

"Health is always on our mind these days and our messages of facing your inner self and loving yourself is ultimately possible when you're healthy," said singer Jimin.

"Especially since it is very risky outside these days, I hope you take care of your health."