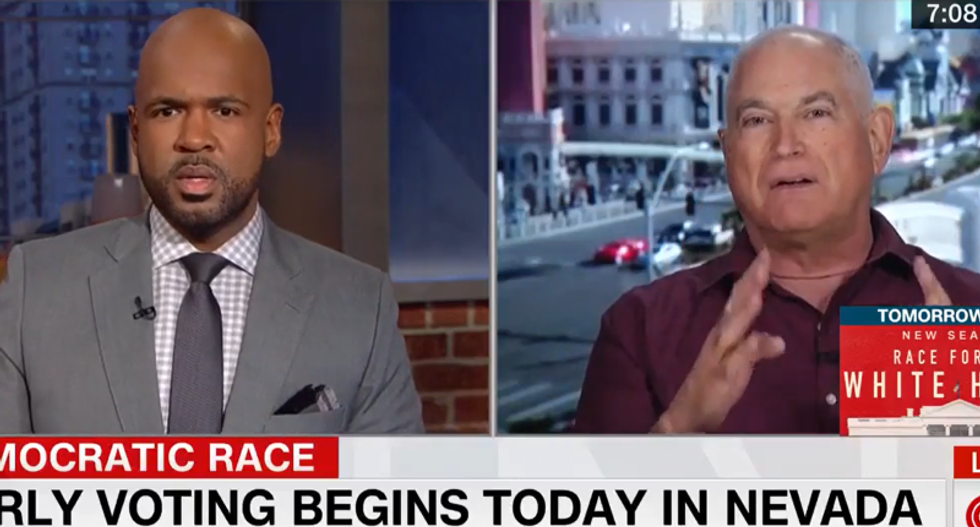 On CNN Saturday, anchor Victor Blackwell got Nevada Caucuses site leader Seth Morrison to concede that the caucus system — even with its expanded early voting — was broken beyond repair and needs to be abolished.

"I strongly encourage early voting, because at least it's on a piece of paper," said Morrison. "They've done ranked choice voting in a few states. The software exists, the process exists."

"If you're advising people to vote early, I know if I'm voting in a primary, I go into a booth, press the button and know which candidate I'm voting for," said Blackwell. "If I'm going to a caucus and I'm physically there, I know where I'm putting my body and who gives me my support. If I give you a list of five names in order of my preference but I don't know who's viable at what point and when do I go to the other person on my list, how do I know at the end of the process who actually had my vote?"

"That is the risk of voting on paper. I fully agree," said Morrison.

"Early voting in Nevada starts in a couple of hours," said Blackwell. "There are people who would go and rank their choices on a ballot, hand it over to the party, and have no idea next week who they actually voted for?"

"Will they remember what they wrote down or no, that's not what I can answer for," said Morrison.

"It's not that if you remember you wrote it down," said Blackwell. "I don't know if my first choice was viable in the first ballot or you jumped to my third choice because that person wasn't viable. If I'm giving you five names, I don't know who was viable at what point. That seems like it would be a constitutional issue if I vote and I don't know who actually has the vote."

"I think this really proves caucuses are horrendous and state parties which have no training, no skill, no expertise in running elections should not be running elections," said Morrison. "The caucus process is flawed. You can find a lot of holes in it and both parties need to really eliminate it."