Oscars kick off in Hollywood with musical medley and political attacks 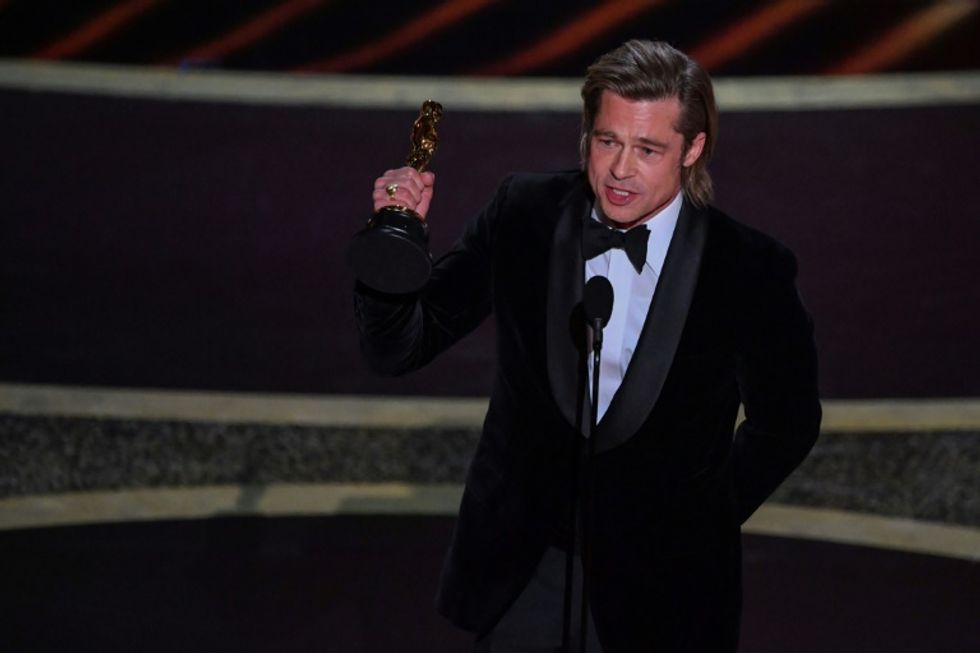 Brad Pitt won the best supporting actor Oscar for "Once Upon a Time... in Hollywood"

The Oscars kicked off in Hollywood Sunday with a vibrant musical medley, a comedy bit from Steve Martin and Chris Rock -- and a first acting Academy Award for veteran star Brad Pitt.

Tinseltown's biggest night is expected to see war epic "1917" battle South Korean thriller "Parasite" for glory, as a row swirls over the lack of minorities on the star-studded nominee list.

"We celebrate all the women who directed phenomenal films and I'm so proud to stand here as a black, queer artist," singer Janelle Monae said pointedly as she led the spirited opening musical number with Billy Porter.

A-listers hit the red carpet under overcast skies at Los Angeles' Dolby Theatre, where a lavish, spiral stage featuring 40,000 crystals provided the glittering setting where 24 golden statuettes will be handed out.

Pitt, who sealed the first win of the night for best supporting actor in "Once Upon a Time... in Hollywood," struck a political tone.

"They told me I only have 45 seconds up here, which is 45 seconds more than the Senate gave John Bolton this week," he said, in reference to President Donald Trump's impeachment trial.

"1917," Sam Mendes's innovative and personal World War I film, swept up trophies in the build-up to Sunday, and is the frontrunner for multiple trophies including the night's grand prize, best picture.

But the movie about two soldiers crossing no-man's-land on a desperate mission -- filmed to appear like one continuous shot -- could find itself in a pitched battle with a movie determined to make history of its own.

"Parasite," about a poor South Korean family infiltrating a wealthy household, looks to be a shoo-in for best international feature -- but could win much more.

In fact, Bong scooped the prize for best original screenplay.

"This is very personal to South Korea," he said.

"The big top prizes are coming down between 'Parasite' and '1917'," Variety senior film editor Marc Malkin told AFP. "Either one winning would be pretty great."

But it could benefit "Parasite," a film that appears impossible to dislike, and whose charismatic director Bong Joon-ho has gained cult status at Hollywood's many awards season galas and soirees.

Quentin Tarantino's "Once Upon a Time... in Hollywood" remains an outside shot, while Martin Scorsese's lavish crime epic "The Irishman" appears to have slipped out of contention.

Veteran director Spike Lee arrived in a purple jacket with lapels bearing the number 24, worn by the Lakers icon who was killed in a helicopter crash two weeks ago.

"Tribute. Honor. Homage. We all miss him," said Lee.

Both Bryant and Douglas have been added to a hastily re-edited "in memoriam" montage honoring those Hollywood lost this year, with Billie Eilish expected to provide a moving musical accompaniment.

The record Grammy-winning singer, who will soon voice the new James Bond theme, is one of several high-profile musical guests on a night when all five nominated songs will be performed.

Idina Menzel blasted out "Into the Unknown," the song from "Frozen II," with other singers who portray Elsa in foreign-languages version of the Disney film.

Elton John, tipped to win for "(I'm Gonna) Love Me Again" from "Rocketman," will feature, as will Cynthia Erivo -- the only non-white acting nominee, who also sang and wrote the theme to anti-slavery biopic "Harriet."

No female directors were nominated this year.

Natalie Portman, a best actress Oscar winner in 2011 for "Black Swan," let her feelings about the lack of nominations for female filmmakers be known -- she had their names stitched into the Dior cape she wore to the gala.

"I wanted to recognize the women who were not recognized for their incredible work this year in my subtle way," Portman told the Los Angeles Times.

Irish maestro Eimear Noone will become the first woman to conduct the Oscars orchestra, but diversity among guest hosts and performers is unlikely to assuage anger over this year's nominations.

The Oscars in the acting categories -- usually a subject of agonizing deliberation for industry pundits -- appear settled, with the same four stars sweeping up rave reviews and prizes all season.

Joaquin Phoenix and Renee Zellweger are believed to be far ahead of the competition for best actor and best actress.

Phoenix underwent a striking transformation to portray the title comic book supervillain in "Joker" -- as did Zellweger to play legendary Hollywood diva Judy Garland in "Judy."

Tinseltown favorite Laura Dern has her fingertips on the supporting actress prize, for her work as a cutthroat divorce lawyer ("Marriage Story").

And Pitt won as expected.

The ceremony has no host for a second consecutive time, after last year's batch of bright guest presenters caused a trend-bucking uplift in TV ratings.