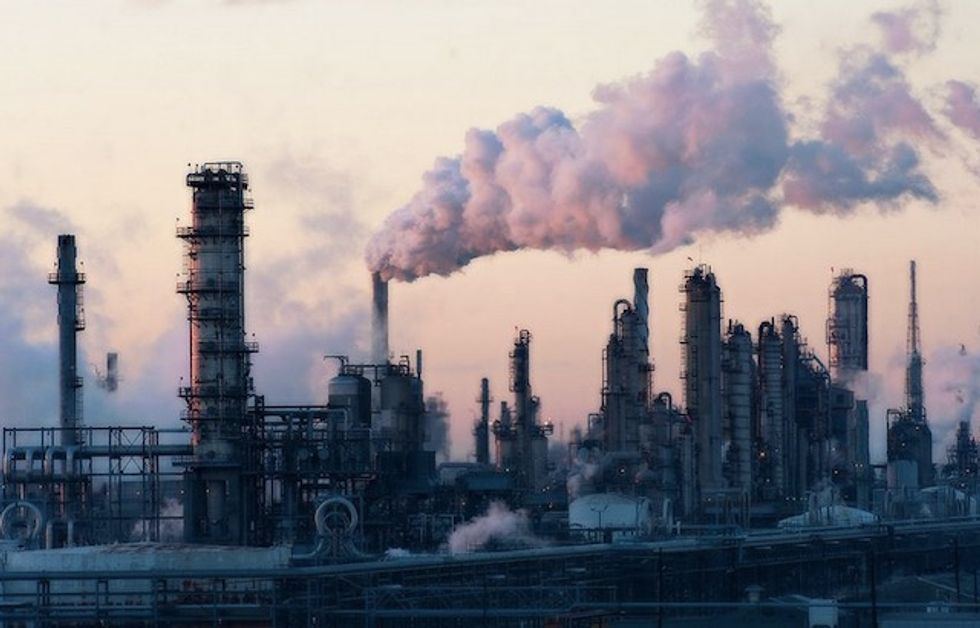 An oil refinery along the Houston Ship Channel. Louis Vest

An environmental nonprofit has released an analysis of first-of-its-kind air monitoring data that shows benzene levels at 10 U.S. petroleum refineries exceeded limits established in an Obama-era environmental regulation. Six are in Texas.

Eight years ago, two environmental nonprofits sued the U.S. Environmental Protection Agency. The agency was a decade overdue in updating limits on how much hazardous air pollution the country's oil refineries could emit; the groups hoped a lawsuit would force it to act.

The result was a regulation that required more than 100 refineries to monitor — and report — levels of cancer-causing benzene along the perimeters of their facilities and to make fixes when concentrations exceed a certain threshold.

On Thursday, the Washington, D.C.-based Environmental Integrity Project — one of the two nonprofits that sued the EPA in 2012 — released an analysis of the publicly available monitoring data refineries began sending to the EPA in January 2018. It found that 10 of them had reported benzene levels above the established threshold over a one-year period that ended in September. Six of those refineries are in Texas, including three in the Houston metro area.

The Texas refinery that reported the highest concentrations of the hazardous pollutant at its fence line was Total Port Arthur Refinery in Port Arthur, with levels 148% greater than limit, according to the report.

“These results highlight refineries that need to do a better job of installing pollution controls and implementing safer workplace practices to reduce the leakage of this cancer-causing pollutant into local communities,” Eric Schaeffer, executive director of the Environmental Integrity Project, said in a statement. “EPA in 2015 imposed regulations to better monitor benzene and protect people living near refineries, often in working-class neighborhoods. Now, EPA needs to enforce these rules.”

The EPA didn't immediately respond to a request for comment.

The Environmental Integrity Project stressed that the 10 refineries are not necessarily in violation of the law.

Under the rule, facilities must collect air samples at their fence lines every two weeks, and if the average of the highest concentrations of benzene exceeds 9 micrograms per cubic meter of air over a one-year period, they are required to investigate the cause and take action to reduce emissions.

The other Texas refineries that reported benzene levels above the federal action limit are:

In written statements, all the companies said they have worked hard to reduce emissions of benzene and other hazardous air pollutants. Some stressed that the fence line monitoring data isn't necessarily indicative of public health risks and described the report as misleading.

"The Total Port Arthur Refinery has a robust monitoring system in place to assist us in identifying the source of an emission, investigating its cause and implementing corrective actions," the French oil giant said in its statement. "We are committed to comply with EPA rules. We take seriously our responsibility to reduce our environmental footprint."

"Chevron has taken steps, including testing and piloting new monitoring technology to identify potential sources, which would drive a reduction in levels at our refineries’ fence lines," the statement said.

It noted that the facility, which had a long history of problems with air pollution and worker safety, has submitted a corrective action plan to Texas' environmental regulatory agency that called for monitoring improvements, which it said are "currently underway."

Kansas-based Flint Hills Resources said that the fence-line monitoring data it reported to the EPA isn't necessarily indicative of benzene levels in communities near its facility.

"Corpus Christi maintains an extensive network of ambient air monitors that indicate benzene levels are much lower than this report would suggest and well within public health standards," the company said in a statement. "Even so, we constantly strive to minimize our emissions."

Shell said that it had used the monitoring data at its Deer Park refinery to "identify a single operational activity near the fence line that drove the outcome, conduct an investigation on the cause and apply corrective measures."

The company added that as of the fourth quarter of 2019, the facility's rolling annual average is 6.99 micrograms per cubic meter, which is below the EPA threshold of 9.

Ohio-based Marathon Petroleum said in a statement it had traced its high emissions to a relief valve, fixed the issue and gone even further: "In addition to correcting the one-time relief valve situation, we have installed additional emissions controls on several of our storage tanks and deployed mobile monitoring sensors that provide real-time emissions data, so we can identify potential sources and address them."

In a one-sentence statement, Valero pointed out that its current benzene monitoring averages are below the threshold.

Benzene, a highly flammable gas with a sweet odor, has been classified as a known human carcinogen by EPA "for all routes of exposure," according to the agency. Short-term exposure to the chemical may cause drowsiness, dizziness and headaches, as well eye, skin and respiratory irritation and even unconsciousness. Long-term exposure among workers has been linked to increased incidence of leukemia and blood disorders. Women who have inhaled benzene at high levels have reported adverse impacts to their reproductive systems, and adverse impacts to fetal development have been observed in animal testing.

The Environmental Integrity Project noted that the 9 micrograms limit is not tied to any official health-based standards, but it said that the 10 refineries "have long-term benzene concentrations that are more than three times higher than California’s long-term exposure limit for increased risk of blood disorders and other disease."

"When compared to other benchmarks established by EPA, some of the highest emitting refineries on the list of 10 could represent an additional cancer risk of 4 in 10,000, when considering lifetime exposure," the report says.

The report notes that "EPA’s Integrated Risk Information System indicates that inhaling benzene concentrations as low as 13 micrograms per cubic meter over a lifetime is likely to cause one additional cancer case for every 10,000 people exposed."

While the Trump administration has unwound dozens of other Obama-era environmental regulations on the fossil fuel industry, a final rule it proposed this week keeps in place the benzene monitoring requirement for refineries.

Photo: An oil refinery along the Houston Ship Channel.