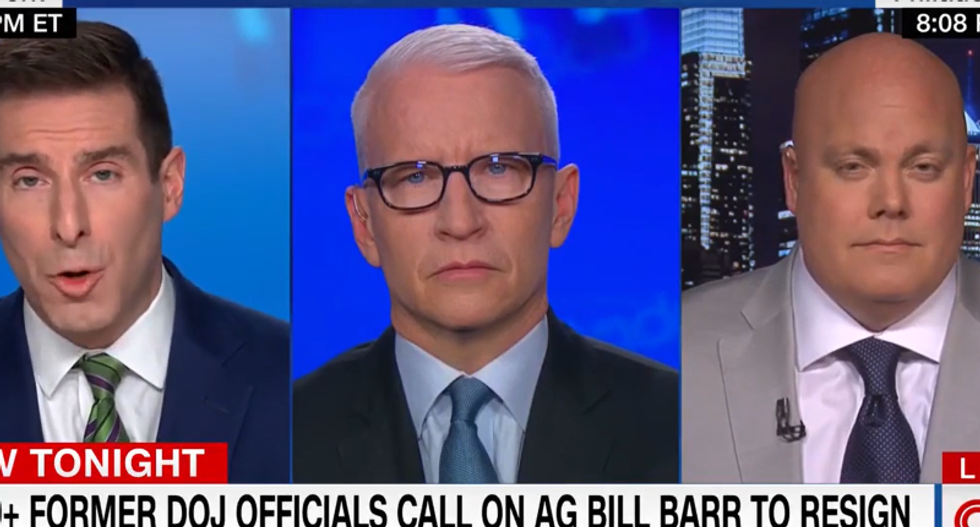 Schultz initially tried to claim that the 2,000 federal prosecutors calling for Barr's resignation had a political axe to grind. "You have a lot of folks that have a partisan agenda pushing this thing out, before the facts have really, have really been discovered, as it relates to what happened," said Schultz. "And Barr is vehement about stating that, you know, that decision was made long before any of the tweets, long before — and before the president made my statements on this matter ... he has to have the trust in the folks that are working below him."

"First of all, this is not 2,000 Democrats who signed this letter," shot back Honig. "This is 2,000 former prosecutors who are allying with both parties, who served under both parties — I served more time under Republican than Democrat. But this is no rush to judgment— "

"Are you a Republican or a Democrat?" cut in Schultz.

"Bill Barr has been in office for a full year, and let's look at the track record here," said Honig. "First of all, he misstated, he distorted Robert Mueller's findings. He tried to keep the whistleblower's complaints on Ukraine from going to Congress, even though the law is very clear that it had to go to Congress. He declined to even open an investigation of the Ukraine matter, when I think any prosecutor worth his salt would at least open an investigation and take a look. And out of the 60,000-plus cases that the Justice Department does every year, what two cases has William Barr and the higher echelons of the Justice Department come into and overruled the trial prosecutors, the line prosecutors? Michael Flynn and Roger Stone."

"What do those two people have in common? They're both close political allies of Donald Trump," added Honig. "You can't ignore this pattern. It's not all about Roger Stone. Roger Stone was the straw that broke the back, but it's been a full year of abuse from William Barr."