Trump will bury the election in 'anti-Semitic tropes' if Sanders or Bloomberg is nominated — and the media must prepare: Columnist 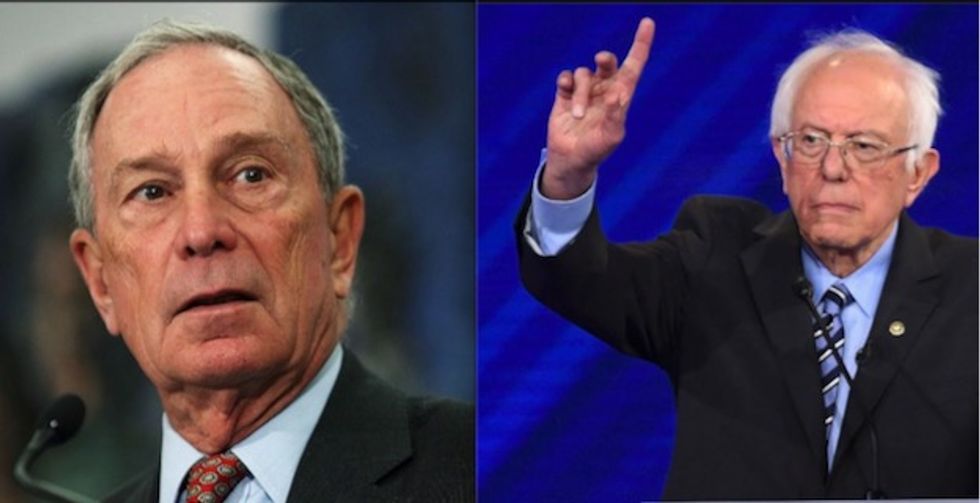 Writing for the progressive Israeli newspaper Haaretz, columnist Noah Berlatsky warned that if Sen. Bernie Sanders (I-VT) or former New York City Mayor Michael Bloomberg become the nominee, they will face a barrage of unprecedented anti-Semitism from President Donald Trump and his defenders — and it is incumbent on the media to identify these attacks for what they are.

"With Donald Trump as the Republican incumbent, a Jewish nominee will also almost certainly mean that the 2020 election campaign will be awash in anti-Semitic tropes, slurs, and conspiracy theories," wrote Berlatsky. "It's important for the media and the public to be ready to identify them and refute them. The nomination of a Jewish candidate can't be allowed to become an occasion for increased hatred and violence."

"Bigotry has been central to Trump’s presidency, and it will be central to his reelection campaign," wrote Berlatsky, noting that Trump has used racist and sexist slurs against other candidates, like his "Pocahontas" attack on Sen. Elizabeth Warren (D-MA). "But which bigotry he uses will depend to some degree on the opponent he faces. Jewish people and their allies need to be ready to anticipate, and respond, to anti-Semitism."

"We can be certain Trump will use anti-Semitism against a Jewish candidate because he used anti-Semitism even against the non-Jewish Democratic nominee Hillary Clinton in the 2016 election," continued Berlatsky. "Trump's last major campaign ad linked Clinton to Jewish democratic donor George Soros and Jewish CEO Lloyd Blankfein. The ad said they were part of a 'global power structure' of 'people who don't have your good in mind.' The anti-Semitism was so blatant it barely even counted as a dogwhistle."

"Soros is a central figure in far right propaganda, and he's likely to be mentioned repeatedly in any presidential contest featuring a Jewish candidate," wrote Berlatsky. "A billionaire philanthropist and Holocaust survivor, Soros regularly donates to Democratic causes. This has led to paranoid certainty on the right that Soros is behind every left protest or movement, and that he is nefariously attempting to undermine the American (Christian) character and way of life." For instance, Trump blamed Soros for manufacturing migrant caravans — a conspiracy theory cited by the gunman who opened fire on the Tree of Life Synagogue in Pittsburgh in 2018.

At the same time, wrote Berlatsky, "it's also likely that in a general election campaign, both Bloomberg and Sanders would be accused of being fake Jews who are betraying Israel. Trump is on record as saying that Jews who are Democrats are 'disloyal,' because they do not follow the lead of Israel's right wing government. The implication for Trump is that American Jews are not real Americans, and owe their duty first to an Israeli ethnonationalist state which is a junior partner of the American right. Sanders has been particularly critical of Israel's treatment of the Palestinians, but any Jewish candidate criticizing Trump is going to be attacked as a traitor."

"Sanders is one of my top choices in the primary, and Bloomberg is, for me, dead last," wrote Berlatsky. "But neither of them should be attacked as a fake Jew, or as un-American. Neither should be smeared as part of a shadowy global conspiracy. Nor should pundits attack Jewish candidates by calling their supporters Nazis. Don't do Trump's dirty work for him."