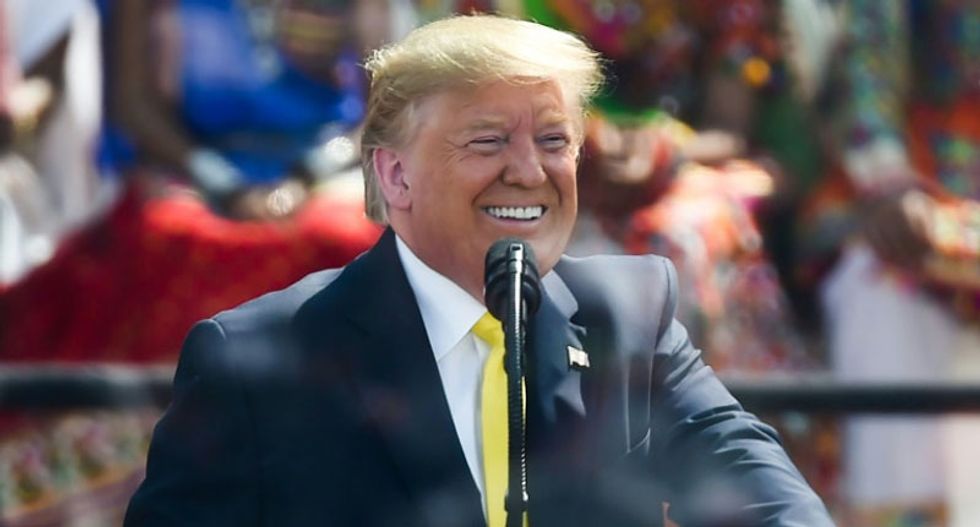 Emerging in a stadium to the appropriate strains of the Village People's "Macho Man" as 100,000 people cheered on, US President Donald Trump looked like he was at a campaign rally in America's Midwest.

But the US leader was thousands of miles away, sweltering under India's scorching heat as he kicked off his first official visit to the nation with a lavish extravaganza at the world's largest cricket stadium.

Five months after being feted by 50,000 people at a mass rally in Houston, Trump revelled in pomp and pageantry once more as Prime Minister Narendra Modi went all-out to welcome him in his home state of Gujarat.

A huge crowd packed Sardar Patel Stadium in Ahmedabad on Monday, dancing to a mixtape of the songs from Trump's US campaign rallies as they wore masks of Modi and him.

Trump's penchant for flattery has been noted by many world leaders and Modi -- who also commands crowds of adoring flag-waving supporters at rallies -- used the occasion to put on a spectacle for the visiting president.

Brightly dressed folk dancers and drummers lined the red carpet as Trump stepped off Air Force One, and hoardings trumpeting the pair's friendship were erected alongside fluttering US and Indian flags.

Thousands of people pressed against metal barricades on a warm spring afternoon to catch a glimpse of the leaders' motorcades -- although the turnout was far lower than Trump's prediction of seven million.

"We are here to welcome Trump. I am feeling very happy that my city has the honour of hosting both Trump and Modi," housewife Romila Bain told AFP while she waited for the motorcade.

As people in the stadium cheered on Modi's every proclamation, the Indian leader heaped praise on Trump.

"The whole world knows what President Trump has done to fulfil the dreams of America," the 69-year-old boomed in Hindi behind a large bullet-proof screen.

"India-US relations are no longer just another partnership. It is a far greater and closer relationship."

Trump was equally profusive in his praise of Modi -- calling him "my true friend" -- and praising the South Asian nation's achievements from Bollywood to superstar cricketers as the love fest continued.

But he stumbled on Indian words, including Ahmedabad ("Ahba-bard") and tea-seller chaiwalla ("cheewalla"), and chuckled after his attempt to pronounce the name of Hindu monk Swami Vivekananda ("Swami Vivekamandan").

Not everything went to plan, with thousands filing out of the stadium during Trump's speech as they struggled to cope with the heat in the windless stadium.

During campaign rallies, Modi traditionally speaks at the end of the event to stop supporters from leaving early, but as host, the prime minister spoke first.

And despite promising to speak again after Trump, tired spectators decided they had had enough.

"We left midway through Trump's speech. It was too hot. People ahead of us too left. There was direct sun where we were sitting," 18-year-old engineering student Manav Patel, 18, told AFP.

Away from the high-security show, clashes broke out in the capital New Delhi over a contentious citizenship law, hours before the arrival of Trump for bilateral talks.

And in Bhopal, women survivors of the world's worst-ever industrial disaster at a US-run plant in 1984 that killed thousands hit an effigy of Trump with brooms as they called for justice.

As Air Force One touched down in Agra where he and the First Lady were set to visit the Taj Mahal after Ahmedabad, Trump told reporters he enjoyed the welcome party.

"I thought it was fantastic. They worked really hard," he said.