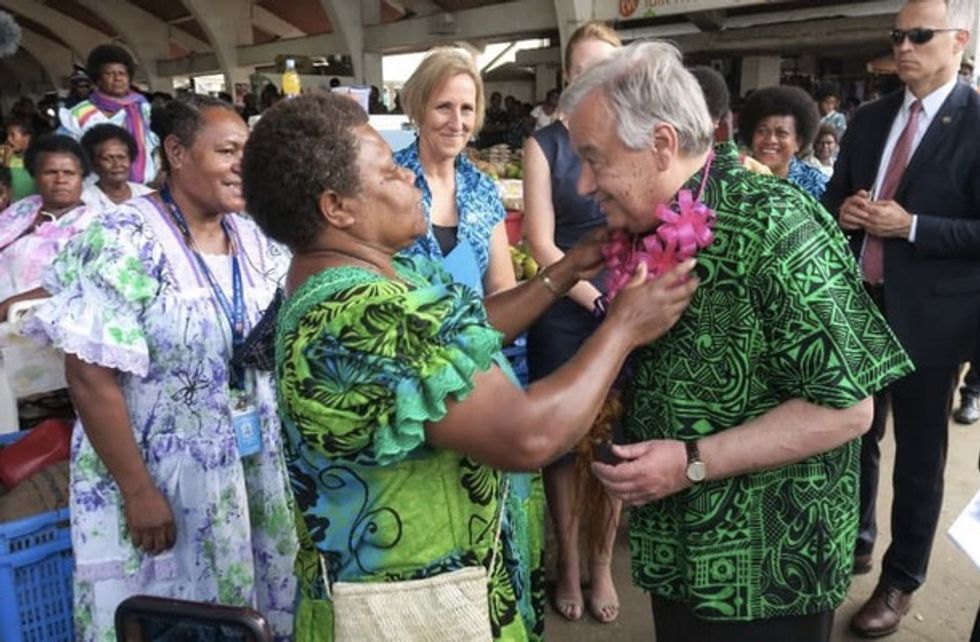 In May 2019, the UN chief Antonio Guterres (R) met with female vendors at a market setup to empower women in Port Vila, Vanuatu

UN chief Antonio Guterres Thursday called for an end to gender inequality which he said "should shame us all in the 21st century because it is not only unacceptable, it is stupid."

Comparing it to past "stains" of slavery and colonialism, he said discrimination against women and girls remained a major problem around the world.

"From the ridiculing of women as hysterical or hormonal, to the routine judgement of women based on their looks; from the myths and taboos that surround women's natural bodily functions, to mansplaining and victim-blaming –- misogyny is everywhere," he said at an event at The New School university in New York.

"It is time to stop trying to change women, and start changing the systems that prevent them from achieving their potential," the UN head said.

"The 21st century must be the century of women's equality."

Ending the gender pay gap and repealing laws that discriminate against women and girls were just two of the areas the UN was targeting, the secretary general noted.

"We must urgently transform and redistribute power, if we are to safeguard our future and our planet. That is why all men should support women's rights and gender equality. And that is why I am a proud feminist."

As of January 1 this year, the UN achieved gender parity across its senior-most ranks and has pledged to extend this across all levels by 2028.

Despite the existence of safer alternatives, toxic "forever chemicals" linked to a wide range of health problems are found in most products labeled stain- or water-resistant, from rain jackets and hiking pants to mattress pads, comforters, napkins, and tablecloths.

"We need urgent action at the state and federal levels to solve the PFAS crisis, including by quickly stopping its use in products we wear and use in our homes."