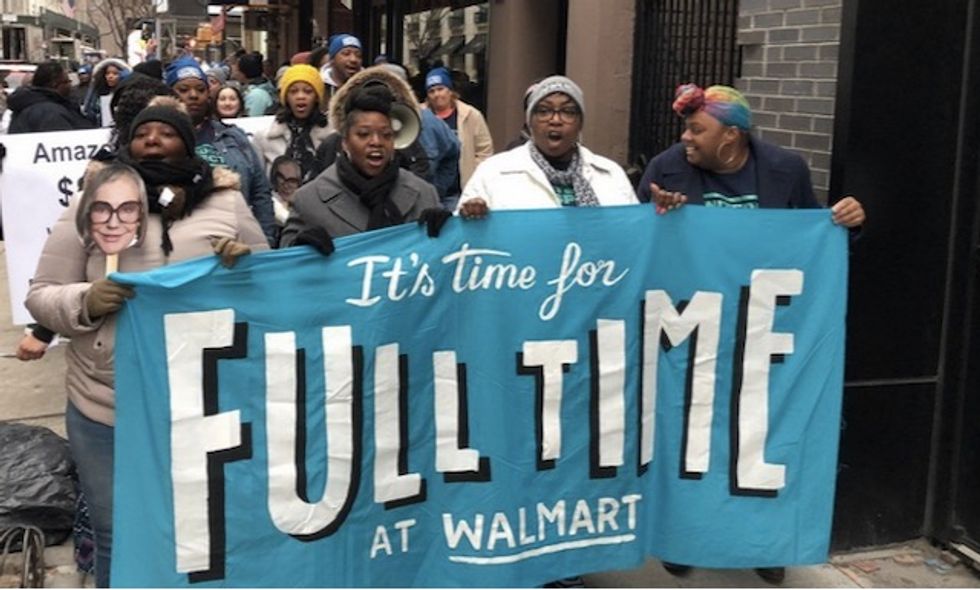 The labor rights group United for Respect led Walmart workers in a demonstration outside Walmart heiress Alice Walton's New York apartment on Tuesday, demanding a living wage and reliable working hours for all of the company's employees. (Photo: United for Respect/Twitter)

"Winning good jobs at Walmart, the country's largest corporate employer, is the gateway to changing the service economy as a whole."

"Winning good jobs at Walmart, the country's largest corporate employer, is the gateway to changing the service economy as a whole." 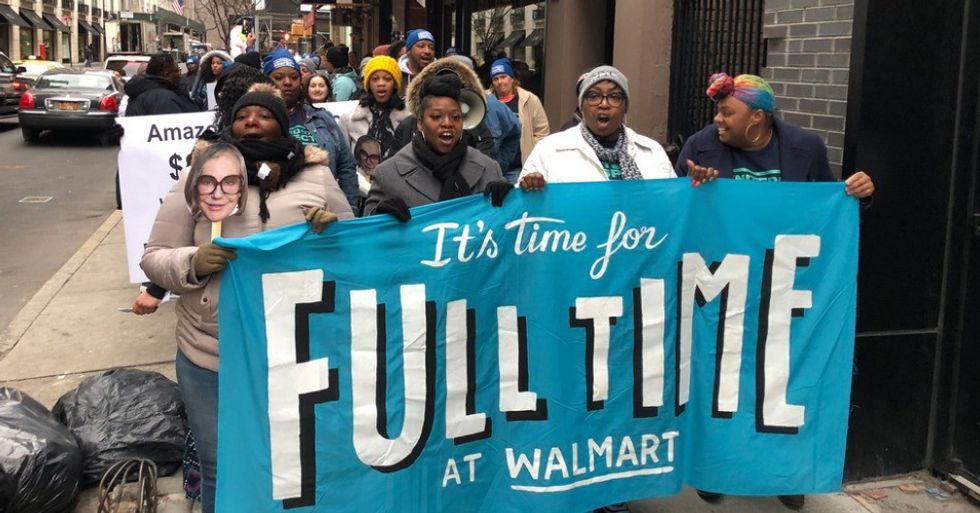 The labor rights group United for Respect led Walmart workers in a demonstration outside Walmart heiress Alice Walton's New York apartment on Tuesday, demanding a living wage and reliable working hours for all of the company's employees. (Photo: United for Respect/Twitter)

Walmart workers issued a "wake up call" to Alice Walton, an heir to the retailer's $500 billion fortune, in New York on Tuesday by marching to Walton's New York penthouse and demanding her company pay its 1.5 million workers a living wage and give them reliable, stable work schedules.

The protest was partially a response to the company's so-called "Great Workplace" restructuring initiative which Walmart began testing last year and plans to roll out in at least 1,100 of its 5,300 U.S. stores by the end of 2020.

"We're here taking on the billionaires who are destroying our economy and our democracy. Now with the unveiling of the Great Workplace, we see Walmart quietly eliminating more full-time positions. It's time for the Waltons and Walmart CEO [Doug] McMillon to stop hoarding company profits to enrich themselves through share buybacks."

According to internal documents obtained by the Washington Post Tuesday, employees are bracing for job cuts under the program, which will consolidate multiple workers' responsibilities into single roles with hourly pay staying the same or even going down in some cases.

"Associates worry Walmart is using the 'Great Workplace' to cut costs by reducing overall staffing and the general number of mid-level store managers," said United for Respect in a press statement. "Walmart has deliberately been pursuing a part-time strategy for more than a decade. In 2005, 80% of Walmart's associates were full-time. By 2018, an estimated 50% of Walmart's U.S. workforce were part-time."

The group is focusing its attention on the Walton family because, with a combined net worth of $191 billion, they are the biggest beneficiaries of Walmart's stock buyback program. If funds from the program were divided among workers instead, one million Walmart workers could have benefited from a $5.66 per hour pay raise in 2018, according to the Roosevelt Institute.

"We're here taking on the billionaires who are destroying our economy and our democracy," said Melissa Love, a United for Respect member and Walmart associate who attended the protest. "Now with the unveiling of the Great Workplace, we see Walmart quietly eliminating more full-time positions. It's time for the Waltons and Walmart CEO [Doug] McMillon to stop hoarding company profits to enrich themselves through share buybacks."

United for Respect organizers led dozens of workers in chanting, "People Over Profit!" and "Hey hey! Ho ho! Corporate greed has got to go!" as they congregated outside Walton's penthouse.

United for Respect has been campaigning for Walmart workers' rights since 2011, when the group created a Declaration of Respect demanding that the nation's largest private employer, and largest employer of black and Hispanic workers, raise its minimum wage to $15 per hour, provide consistent and stable work schedules, and take other steps to make sure employees' interests are represented.

With organizers' help, United for Respect says, Walmart workers have successfully pressured the company to raise the minimum wage from $7.25 to $11 per hour and to adopt safety and accommodation policies for pregnant employees.

On Tuesday, United for Respect organizer Mauricio Escobar tweeted, workers in New York were letting "everyone know that it's time to make billionaires pay their fair share and treat their workers with dignity and respect."

Under the "Great Workplace" initiative, Walmart executives claim workers are able to do more "meaningful work," and have assured them that the program offers the chance for promotions. But workers say they are being pitted against one another to interview for jobs within the company, and that in some cases they're being offered less compensation:

One worker said she was originally told she would make $2 more an hour if she became an academy trainer; a week later, she was told her pay would remain the same if she took the job. A co-worker was told they would lose 75 cents per hour but have more responsibilities under the new plan.

LuAnn Turnage quit her job in November, after two years as a customer service manager at a Plainwell, Mich., supercenter. She said the store was in the process of replacing five customer service managers with one team lead. Turnage, who is a member of United for Respect, applied for the new position but wasn't selected. She quit, she said, because she thought her only other option was to take a demotion or a pay cut.

"After years of service, it's not right for loyal employees like me to face job uncertainty and be required to reinterview to keep our job. I have two children to take care of at home," said Lashana Frazier, a United for Respect member and customer service manager of 14 years. "I've had a reliable full-time role in my store for more than a decade, but now they're eliminating my position and making me re-interview for a new one. Associates deserve better than this."

United for Respect says that as the nation's biggest private employer, Walmart could single-handedly change the state of labor rights in the U.S. if it listens to its employees' demands.

"Winning good jobs at Walmart, the country's largest corporate employer, is the gateway to changing the service economy as a whole," the organization's website reads.