'A conveyor line of bodies': Unthinkable scenes unfold in New York City as corpses are loaded into a refrigerated truck 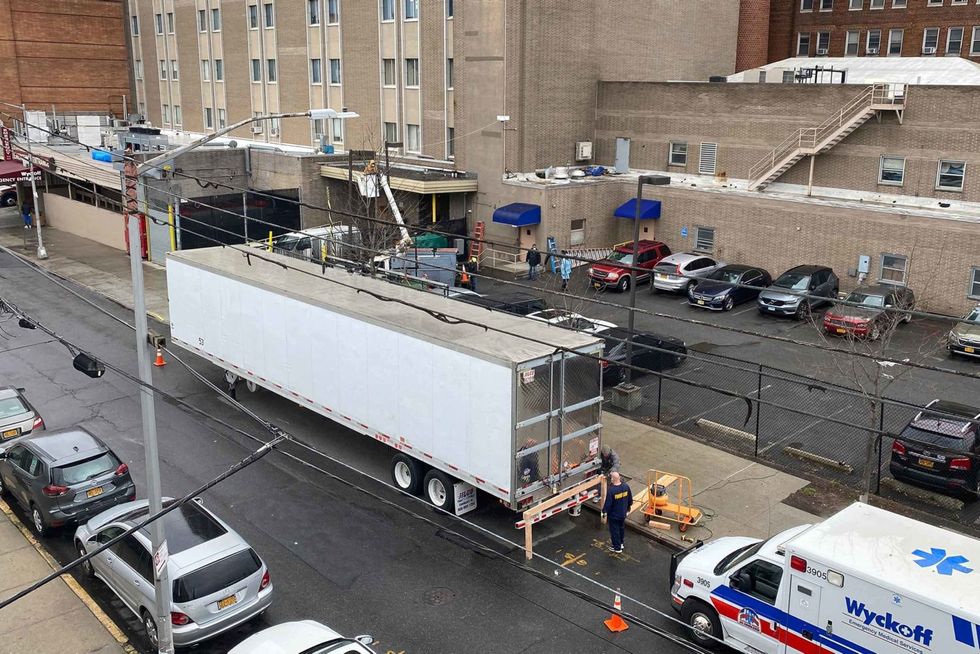 For Marc Kozlow, the unthinkable played out on Stanhope Street in Brooklyn this weekend. He lives on the block with his fiancee and dog, a rescue named Hank.

Near his apartment is Wyckoff Heights Medical Center, a 350-bed nonprofit hospital in Brooklyn’s Bushwick neighborhood. Most of the hospital’s patients are people of color; about a fifth are 70 or older. This month, Mayor Bill de Blasio announced an 82-year-old Brooklyn woman at Wyckoff was the city’s first official COVID-19 death.

As of Sunday, the city’s death toll had risen to 776, accounting for more than quarter of the deaths nationwide. The city has brought in at least 45 refrigerated trucks and tents, in case hospitals and morgues reach capacity for the number of deceased that they can hold. “They are distributed as needed to support hospitals,” said Aja Worthy-Davis, a spokeswoman for the Office of Chief Medical Examiner.

Wyckoff has a refrigerated truck, said hospital CEO Ramon J. Rodriguez. It is on the side of the hospital, close to the loading dock. The morgue is in the basement.

Kozlow shared with ProPublica several pictures he’d taken because he wants the country to take sensible precautions. “I understand the time that we’re in, and I understand how this virus is taking over everything,” he said. “I shared the photos with the intention that the rest of the U.S. knows to take it seriously. This is what the country should be aware of, and hospitals around the country should prepare for this to come.”

His account has been edited for clarity and brevity.

“It’s not a huge hospital. We have a dog. I have to take him out three or four times a day. All around the hospital is littered with surgical masks and used gloves that are not finding their ways into trash. I started thinking, ‘What the hell is happening?’

“And then two days ago, the trailer arrived. I didn’t think twice of it. I thought it was possibly one of the many additional medical supply trucks that the hospital needed. When I was taking the dog out for the evening walk, I walked past the truck. I watched a man in full protective gear work the trash compactor in a hazmat suit. A doctor and a nurse were walking and the doctor said, ‘They got mad bodies in there.’

“And then on Saturday morning, they started building a platform. They’re drilling and setting up this platform system on the street. They finished the platform, and then they basically carted out what looked like a body in a gurney, but I was very unsure of what it was and they opened it up and it was a coffin. The guys on the platform pulled out a body from the trailer, and put it into the coffin. About three to four hours later, it was like a conveyor line of bodies.

“This was about 6 to 7 p.m. There were at least 10 bodies going into the trailer. The first ones had bags, and then they were one by one on gurneys, and then they started coming two per gurney, they were just covered in sheets.

“We leave our windows open and we hear the hum of the refrigerator going all night long. It’s disturbing to know what’s in there.”