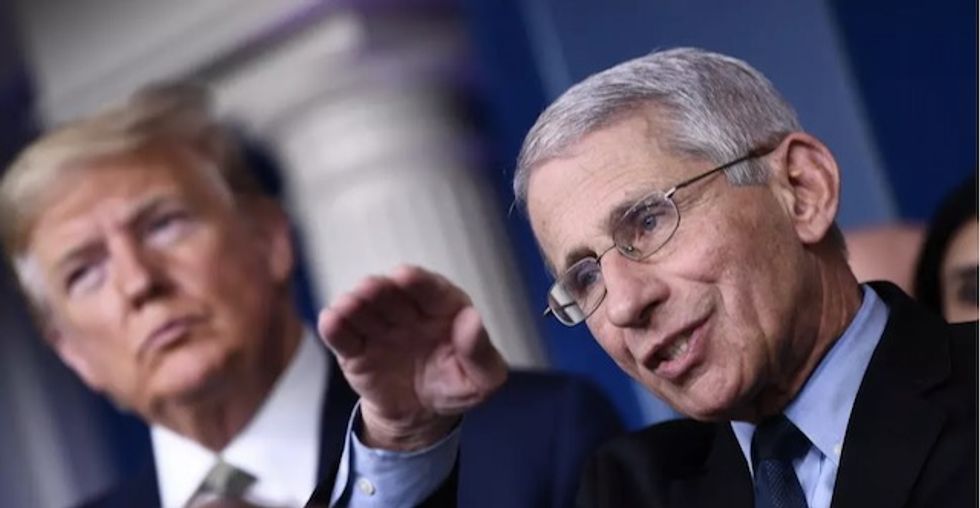 Anthony Fauci, the United States' top infectious disease expert, has led the country's response to every major epidemic since the outbreak of AIDS in the 1980s, long striving to ensure the science conveyed to the public is clear and accurate.

As millions of Americans turn to him during the coronavirus pandemic, the physician-scientist has had to acquire a new skill: The art of delicately pushing back against the bluster of his boss, President Donald Trump, without saying he's wrong.

Both men are in their seventies and both are proud of their New York upbringing -- but that's about where the similarities end.

With his calm, professorial demeanor, pint-sized Fauci is fast becoming a household name as the evidence-driven straight shooter in the administration's coronavirus taskforce.

During a televised meeting with pharmaceutical executives in early March, Trump -- who before he became president was famously skeptical of vaccines -- appeared to suggest one could be delivered to start immunizing the public against the virus in "three to four months."

"You won't have a vaccine, you'll have a vaccine to go into testing," replied Fauci in the gravelly Brooklyn accent now familiar to the US public.

"Like I've been telling you, Mr. President, a year to a year and a half," he added, spelling out a more realistic timeline for clinical trials to determine a vaccine has a sound scientific basis, is safe, and can be scaled.

More recently Fauci has been tempering expectations about the prospects of antimalarial drugs hydroxychloroquine and chloroquine, which Trump last week hailed as a "game changer" after the medicines showed early promise in small-scale studies in France and China.

Asked a day later whether he agreed, Fauci stressed it was too early to say and that any "anecdotal evidence" still needs validation in randomized clinical trials.

Fauci, for his part, has consistently downplayed these public yet polite disagreements, telling the respected Science magazine that he and Trump were largely in agreement on substance but mainly differed in emphasis.

"The next time they sit down with him and talk about what he's going to say, they will say, by the way, Mr. President, be careful about this and don't say that," he said. "But I can't jump in front of the microphone and push him down."

Born to Italian-American parents in Brooklyn, Fauci was drawn to health care because of his father, who was a pharmacist.

He joined the National Institutes of Health (NIH) -- the taxpayer-funded steward of medical and behavioral research -- in 1968, two years after receiving his medical degree from Cornell University, and began his career working on immune diseases.

Over the summer of 1981, a flurry of reports landed on his desk about gay men suffering from immuno-compromised forms of pneumonia and cancer -- and he was struck with a shocking realization.

"I actually remember getting goose pimples about it, because I'm saying, 'Oh my goodness, this is a new disease,'" he said in a 2011 interview.

Fauci knew then it was urgent he shift his work's focus.

In 1984, he was appointed director of the NIH's National Institute of Allergy and Infectious Diseases (NIAD), a position he holds to this day, having refused the role of NIH director four times under different presidents.

During the 1980s, he became a lightning rod for criticism that the government was not doing enough to stem the rise of HIV-AIDS -- but rather than run from activists he took their views on board, a collaboration he told The Lancet was key.

His accomplishments include implementing a fast-track system that widened access to antiretroviral medicines, and working with former president George H.W. Bush to plough in more resources.

Under president George W. Bush, Fauci was the architect of the President's Emergency Plan For AIDS Relief (PEPFAR), credited with saving millions of lives in sub-Saharan Africa.

He received the Presidential Medal of Freedom for his work on AIDS in 2008 and more recently has overseen the US response to the Zika virus and Ebola.

Fauci is credited with developing effective treatments for formerly fatal inflammatory diseases, as well as for contributions into understanding how HIV destroys the body's defenses.

And in addition to overseeing his own lab, the 79-year-old continues to treat patients at the NIH's Clinical Center in Bethesda, Maryland.

For his current efforts, Fauci has been widely hailed as an "American hero" and a "national treasure," even as he refuses, as many Democrats might like, to criticize Trump more forcefully over what they see as the president's early reluctance to take major actions.

Instead he likens the current scenario to a "fog of war" and consistently discourages Monday morning quarterbacking, or unfair criticism with the benefit of hindsight.

"I don't want to act like a tough guy, like I stood up to the president," he told New York Times columnist Maureen Dowd.

"I just want to get the facts out. And instead of saying, 'You're wrong,' all you need to do is continually talk about what the data are and what the evidence is."