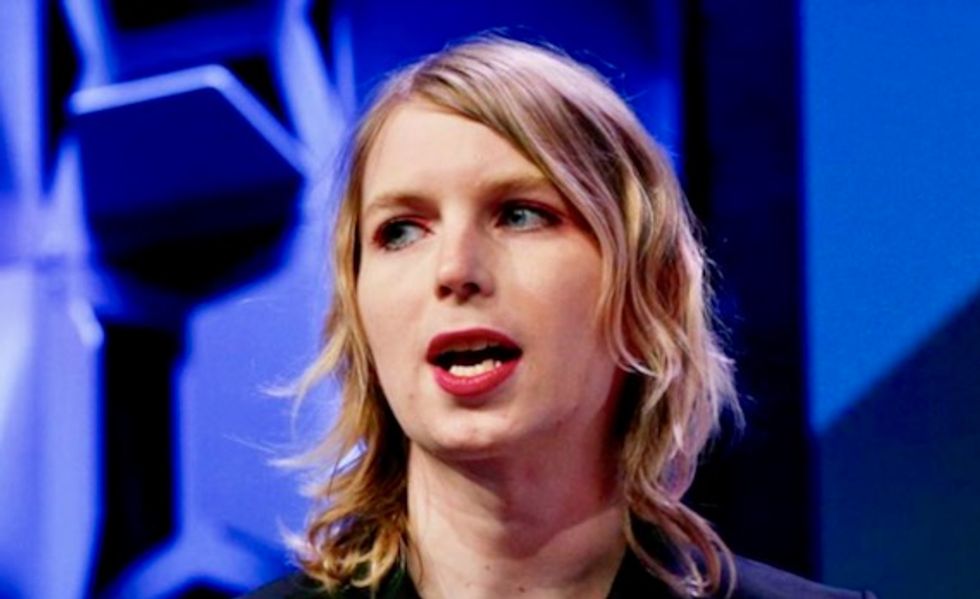 Manning's legal team said her actions "evidence the strength of her convictions, as well as the profound harm she continues to suffer as a result of her 'civil' confinement."

American whistleblower Chelsea Manning's legal team revealed late Wednesday that she is recovering in the hospital after attempting to take her own life while jailed for the vast majority of the past year in what one United Nations expert has denounced as "an open-ended, progressively severe coercive measure amounting to torture."

"In spite of... over a year of so-called 'coercive' incarceration and nearly half a million dollars in threatened fines—she remains unwavering in her refusal to participate in a secret grand jury process that she sees as highly susceptible to abuse."

In a statement, Manning's lawyers highlighted a letter that United Nations Special Rapporteur on Torture Nils Melzer sent to the United States government in November 2019 recommending that Manning "be released without further delay, and that any fines disproportionate to the gravity of any offense she may have committed be cancelled or reimbursed."

With the exception of a one-week period in May 2019, Manning has been jailed at the William G. Truesdale Adult Detention Center in Alexandria, Virginia since March 8, 2019 for her refusal to testify to a grand jury about WikiLeaks and its founder, Julian Assange, who is currently detained in London and fighting the U.S. government's attempt to extradite him.

Manning, who served in the U.S. Army, was first detained in 2010 and convicted under the Espionage Act in 2013 for leaking U.S. government and military materials to WikiLeaks. She was released in May 2017, about four months after outgoing President Barack Obama commuted the remainder of her 35-year prison sentence.

During periods of her initial imprisonment and part of the past year, Manning has sometimes been held in solitary confinement. Despite the conditions of her current detention, Manning has vowed to not testify before the grand jury, even considering the risk to her own safety; Wednesday was not the first time she has attempted suicide.

In a 2019 letter to the judge in her case, Manning wrote that "I object to this grand jury... as an effort to frighten journalists and publishers, who serve a crucial public good. I have had these values since I was a child, and I've had years of confinement to reflect on them. For much of that time, I depended for survival on my values, my decisions, and my conscience. I will not abandon them now."

Last month, Manning's lawyers filed a motion for her release, arguing that her continued "incarceration is not serving its only permissible purpose" of coercing her testimony and is clearly punitive. Manning could serve a total of 18 months behind bars if she maintains her refusal to testify.

Manning's legal team said in the Wednesday statement that she "is still scheduled to appear on Friday for a previously-calendared hearing, at which Judge Anthony Trenga will rule on a motion to terminate the civil contempt sanctions stemming from her May 2019 refusal to give testimony before a grand jury investigating the publication of her 2010 disclosures."

"In spite of those sanctions—which have so far included over a year of so-called 'coercive' incarceration and nearly half a million dollars in threatened fines—she remains unwavering in her refusal to participate in a secret grand jury process that she sees as highly susceptible to abuse," the statement said.

The attorneys added that "her actions today evidence the strength of her convictions, as well as the profound harm she continues to suffer as a result of her 'civil' confinement."

The news of Manning's suicide attempt provoked an outpouring of love for the whistleblower and renewed calls for her immediate release:

All solidarity and love to Chelsea Manning, a hero treated horribly by the US and its barbaric justice system… https://t.co/s5COmIbp1Z
— Dazed (@Dazed) 1584005225.0

Everyone at Stonewall is devastated to hear the news regarding Chelsea Manning, and we extend all our love and soli… https://t.co/1uuhME8WCf
— Stonewall (@Stonewall) 1584011013.0