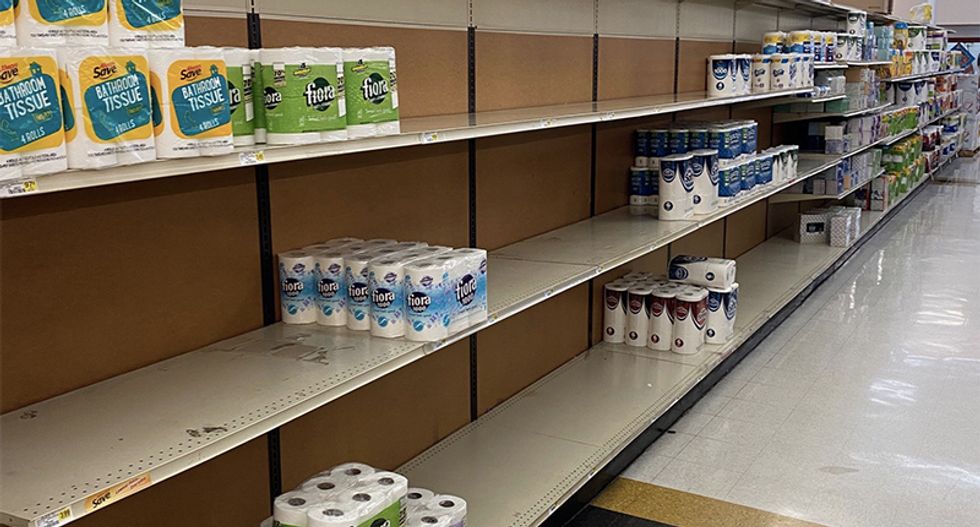 Seattle residents are struggling to find toilet paper. Hand sanitizer is sold out on Amazon, Staples, CVS, Walmart, Wallgreens and other websites. This wasn't what we were told a disaster looked like.

The Washington Post recalled in the novel World War Z a virus that spreads from China. It ultimately turns half the world into zombies. The film "Contagion" shows a highly contagious disease that kills people quickly. There are scenes of fights in grocery stores as society slowly breaks down. "San Andreas" shows Dwayne "The Rock" Johnson being forced to loot a shopping center for clothes after his helicopter crashes. Everyone around him is stealing televisions and other expensive items.

The Post's Marc Fisher writes that there has been little in the way of panic, but he clearly hasn't seen the toilet paper aisles in a grocery store lately.

This reporter's father owns a grocery store in Oklahoma, where hand sanitizer has been out of stock and when new cases come in, the employees purchase it first. The toilet paper aisle is vacant. While that hasn't prompted looting or rioting, it firmly reveals the anxiety people are facing.

"Certainly, some degree of panic has been evident in the severe sell-off on Wall Street and the rush to stock 'pandemic pantries,' as Americans in some parts of the country clear out shelves at grocery stores and other retail outlets," Fisher wrote. "But there’s been no degradation of law and order, no sign of social unrest."

He explained that the line between caution and panic can be a thin one and "not entirely rational."

He cited social science teacher Jerry Rice, who explained that the driver of fear is when people can't control the situation.

“What people fear the most is what they can’t control and what’s new,” Rice said. “A pandemic like this is both of those things. We haven’t experienced anything like this since the 1918 flu. In contrast, people aren’t as afraid of car travel, because we know it so well, even though car travel kills far more people.”

He went on to quote British statistician Simon Briscoe, who said "society united in fear is more cohesive. One where people fear different things is liable to fragment."

Briscoe authored a book on panic and pandemics about 10 years ago when the biggest threat was swine flu, which killed .002 percent of those infected. Coronavirus is far more deadly.

"Briscoe argued that the modern era had produced a tendency toward panic that was neither healthy nor sustainable," wrote Fisher. Now, however, there are actual pandemics.

“It was quite easy to be dismissive then,” Briscoe said. As coronavirus spreads, he said the most beneficial way someone can help themselves is by getting the proper information.

This comes at a time when Fox News networks are spreading misinformation that can get people killed. Brian Kilmeade, for example, insisted that China “started it." He has yet to issue a correction.

Jerry Falwell Jr. appeared on the network to dismiss concerns about the coronavirus, saying that no one freaked out this much over H1N1 with former President Barack Obama. Again, that disease had a much lower mortality rate and the response to it was within a week and there was a vaccine available quickly. The U.S. is still struggling to even get people tested and a vaccine won't be available for at least a year.

Fox News host Laura Ingraham told viewers it was a great time to fly on an airplane.

Behind the scenes, however, Fox is implementing safety standards they mock on air.

“As of yesterday afternoon, Rush Limbaugh was calling this basically a Chinese bioterrorism plot, this is meant to destroy President Trump’s economy,” said New York Times reporter Jeremy Peters. “It is a ploy by the Democrats and the liberal media to take him out and undermine him, to attempt to impeach him again. This is part of the problem with where our political culture is in this country right now, nothing is what it is.”

“Just think for a second about the most vulnerable people as far as this virus is concerned,” he continued. “They’re older — 60s, 70s. Who watches Fox News all day long? People in their 60s and 70s. It is a problem. This is not just delusion, this is dangerous. When people hear it is whipped up by the partisan media, there are lives that are on the line.”

“Panic is bad, but some degree of anxiety is good and adaptive,” The Post cited Dr. Eric Toner, a Hopkins internist and emergency physician. “It’s normal to be anxious if that drives people to do constructive things. The vast majority of people who get this illness will be just fine. But that small percentage who do poorly is a big number, and it’s good for people to understand that while this may not be a risk to me personally, it is to the society in which I live.”

There will always be risks sending children to school or going to work during an outbreak, but Fisher is encouraging people not to panic.

"One of many paradoxes the world faces in a time of dangerous uncertainty is the idea that time both heals and provides false comfort," he closed. "Over time, with good guidance, most people will figure out how best to cope and to help others get through this period."