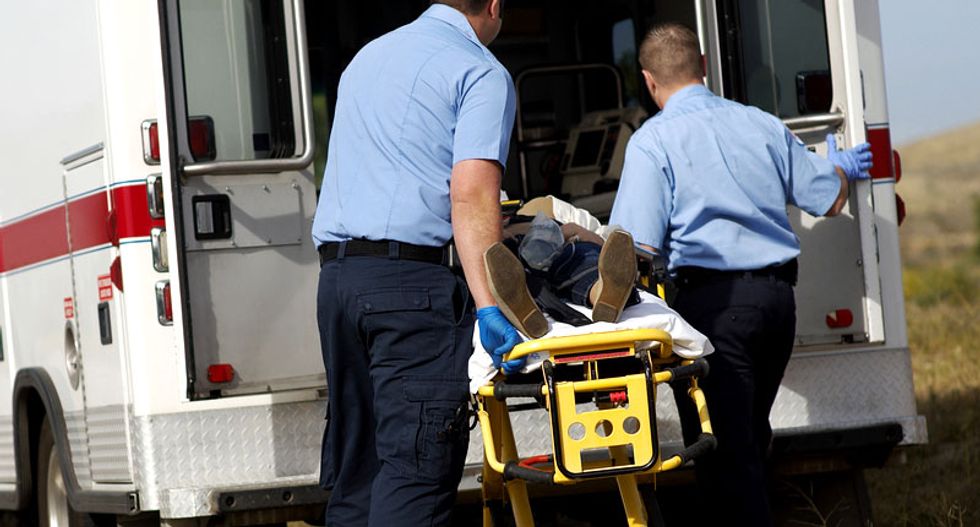 With more cases than any other country, the United States is now the epicenter for the coronavirus pandemic. Our death toll is rapidly rising, and Dr. Anthony Fauci, the nation's top epidemiologist, has said that 100,000 to 200,000 could die by the time it ends.

The pandemic has suddenly shifted the public perception of which workers are essential for society to continue functioning. Emergency medical technicians (EMTs), who rush to rescue the gravely ill, stand on the edge of the front line, directly interacting with those stricken with the virus every day.

For years, the unions that represent EMTs have warned that the American Emergency Medicine System has long been the weakest link in our health care system, upon which COVID-19 is now placing an unprecedented strain.

While police and firefighting services are universally accepted as part of our social contract, the same is not true for emergency medical services. Americans in rural and suburban communities often rely on voluntary ambulance corps, which suffer from a chronic personnel shortage. Other regions are reliant on predatory for-profit companies that pay EMTs fast food wages, but charge exorbitant fees to patients.

As NBC reported last year in a story titled "What if you call 911 and no one comes? Inside the Collapse of America's Emergency Medical Service," just 11 of the nation's fifty states require by statute the establishment of a local EMS department.

Decades of shortsighted, profit-driven health care policy has closed scores of hospitals, a trend also well documented in urban communities of color. That is, in part, why this pandemic is poised to be particularly devastating in the United States.

Burnout, injury and turnover rates are high among EMTs, even among the better-paid civil service EMS units who are more common in big cities. As a consequence, EMTs often end up leaving long before they hit the six-year tenure mark, which is when peer-reviewed medical studies indicate their patients have better outcomes.

"This is a serious issue throughout the entire country," said Oren Barzilay, president the national EMS Labor Alliance and DC 37's Local 2507, which represents the FDNY's EMS and EMT paramedics. "We don't have voluntary police departments across our country, and it's a good thing, otherwise we would have chaos … EMS has been in crisis for a long time, and the COVID-19 epidemic exposes that," Barzilay continued.

"There needs to be national guidelines demanding we have an organized EMS workforce like we do for police and fire. Just in New York State over the past year, we have seen EMS companies go out of businesses and so many of the voluntary EMS houses all shut down because they are no more volunteers," Barzilay told Salon.

Perhaps no facet of our national for-profit health care system is more patchwork and dysfunctional than EMS. For whatever reason — perhaps because EMTS often wear blue collars or have lower social status and lower pay than fellow first responders like firefighters or police officers — their plight is largely ignored.

In Washington D.C., the nation's firefighters have the influential International Association of Firefighters. Police officers have a myriad of national professional organizations. Lobbyists for both of these branches of America's first responder services ensure the needs of these professionals are on the radar of federal, state, county and municipal elected officials.

Michael MacNeil is president of the EMS/BPPBA, which represents the 400 members of the EMS union that serves Boston. That bargaining unit has the rare distinction of having pay parity with other first responders.

MacNeil said in an interview that Congress needs to pass federal legislation immediately to provide local community block grants across the country to help reinforce existing EMS units. In addition, he says there needs to be a lead EMS agency, akin to the U.S. Fire Administration, which conducts critical national data collection and best practices research and benchmarking for firefighting.

"These are things our national EMS Labor Alliance has been pushing for a long time," MacNeil said.

MacNeil says the second urgent national action item in the face of COVID-19 is dismantling the reimbursement economics that force EMTs to take their patients to the emergency room in order for their agency to get paid, whether or not it's the right health care call for the patient.

"There's a money attachment to the way we deliver this essential service," he said. "It all links back to Medicare, Medicaid and private insurance reimburse[ments] and in places like New York City and Boston our services can generate money. But we need to see what we are doing in the community, whether it results in an ER visit or not, as part of protecting the public safety like we do with cops and firefighters."

In Austin, Texas, where city officials on March 6 made the difficult decision to cancel the 34th annual South by Southwest Festival, the local EMS union is an integral part of the city's efforts at a proactive COVID-19 response outside the hospital setting.

Selena Xie is president of the Austin EMS Association, which represents 550 members who enjoy the same civil service status as the city's police and firefighters but provide a public safety net well outside the confines of the hospitals.

When the city decided to close its libraries and recreation centers as part of its social distancing strategy, it was the members of the EMS Association, who serve as Community Health Paramedics and who specifically serve the city's 2,500 homeless people, that alerted officials to the unintended consequences for this vulnerable population. Suddenly, Austin's homeless community had nowhere to go.

"The homeless had no access to cable news or iPhones, so for everything to close suddenly like that on them was really scary," Xie said. "We lobbied the city to open the libraries and rec center and then we organized a community group that's providing 500 meals a day while the city figures out how they are going to realign their pantries and [get] shelter in place worked out."

As Austin's example illustrates, it is at the granular, neighborhood level out in the community where the new battle lines for the COVID-19 war are being drawn. Mobile and engaged EMTs and paramedics can help quell the panic run to the hospitals, which are now gravely overtaxed in many hard-hit jurisdictions. As crucial as the Austin EMS is to the medical community and the public health response to coronavirus, Xie said that they were completely invisible in the eyes of the local news media.

"Our local news outlet talked about what police and fire were doing for COVID-19 and didn't even think to include EMS," she lamented.