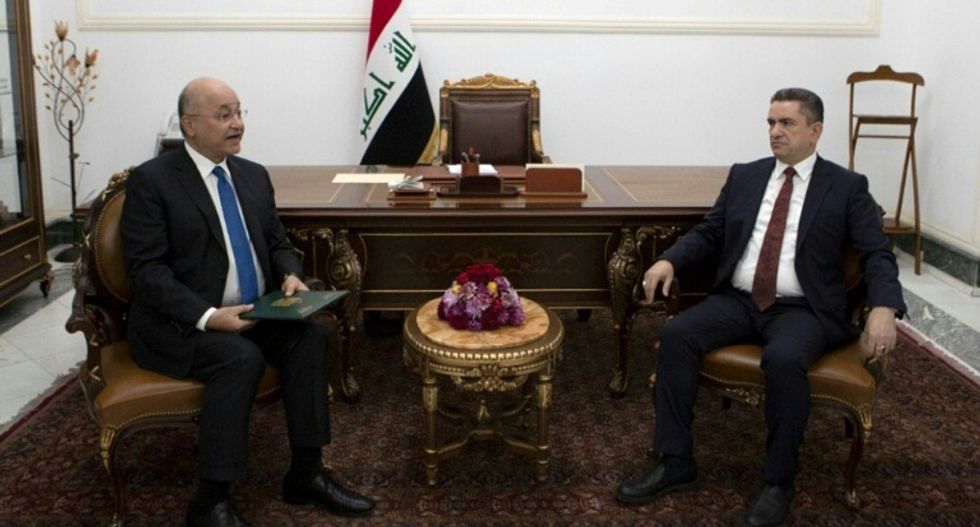 The nomination came as Iraq faced two separate rocket attacks, one near the high-security Green Zone in Baghdad late Tuesday after a dawn attack hit a military base hosting US-led coalition and NATO troops.

In a statement late Tuesday, 54-year-old Zurfi pledged elections within a year of forming his cabinet and vowed to respond to the demands of protesters hitting the streets for months over government graft and inefficiency.

He served multiple terms as governor of the Shiite holy city of Najaf and was elected in the 2018 parliamentary vote under the Nasr coalition, led by ex-PM Haider al-Abadi.

Zurfi once belonged to the Dawa party, an opposition force to dictator Saddam Hussein who was ousted in the 2003 US-led invasion, and has spent years in the United States.

The Iraqi-US dual national would have to renounce his American citizenship to take up the premiership.

Zurfi has 30 days to pull together a cabinet, which would be put to a vote of confidence in parliament.

While he is likely to have the backing of some Shiite parties and the Kurdish and Sunni factions, he was quickly spurned by the powerful Fatah bloc, parliament's second-largest.

"We reject the president's unconstitutional step," said a statement by Fatah, the political arm of the Hashed al-Shaabi military network that includes factions allied with Washington's arch-foe Tehran.

If Zurfi "puts these interests first, he will have US and international support," Pompeo wrote on Twitter.

Zurfi's nomination comes at an especially tumultuous time for Iraq, which has been battered by almost six months of street protests, collapsing oil prices, the novel coronavirus outbreak and renewed rocket attacks.

And that evening, another set of rockets landed near the capital's high-security Green Zone, where embassies including the US mission are based.

One security source told AFP three people were wounded when a residential building was hit.

The rocket attack is the fourth in a single week, after three coalition troops were killed on March 11 in an attack on the Taji airbase, which was targeted again on March 14.

A total of 25 rocket strikes have targeted the US embassy in Baghdad or bases hosting foreign troops since late October, killing three American military personnel, one British soldier and one Iraqi soldier.

None of the attacks has been claimed, but Washington pinned the blame for many of them on Kataeb Hezbollah, an Iran-backed faction in the Hashed, which is nominally incorporated into the Iraqi state's armed forces.

The US has twice bombed Kataeb Hezbollah weapons depots in Iraq.

It also killed Iranian general Qasem Soleimani and the Hashed's deputy chief in a drone strike in January, sparking deep anger as Iran and the US approached the brink of war before they pulled back after retaliatory missile attacks from Iran.

Iraq's parliament, which sees the US strikes as a violation of its sovereignty, responded by voting to oust all foreign forces.

US-led coalition sources said on Tuesday they would redeploy hundreds of troops from bases in Iraq, sending some of them outside the country, but denied the move was a response to the recent spike in rocket attacks.

With its politics in turmoil, Iraq is also struggling to curb the impact of the coronavirus.

According to an AFP toll compiled from medics, the COVID-19 illness is known to have caused 12 deaths in Iraq and infected another 133 people.

Baghdad entered into a six-day curfew at 11:00 pm (2000 GMT) Tuesday, and more than half of Iraq's provinces have announced similar restrictions of varying lengths.

Iraq's top Shiite cleric Grand Ayatollah Ali Sistani announced Tuesday he was banning all group prayers in the Shiite-majority country and said anyone who died of the illness would be considered "martyrs".

The public health crisis comes after nearly six months of street protests against a ruling class widely seen as corrupt, inept and beholden to neighbouring Iran.

More than 550 people have been killed in protest-related violence since October.

While eclipsed by recent developments, violence has continued. One protester was shot dead on Monday, according to medics.