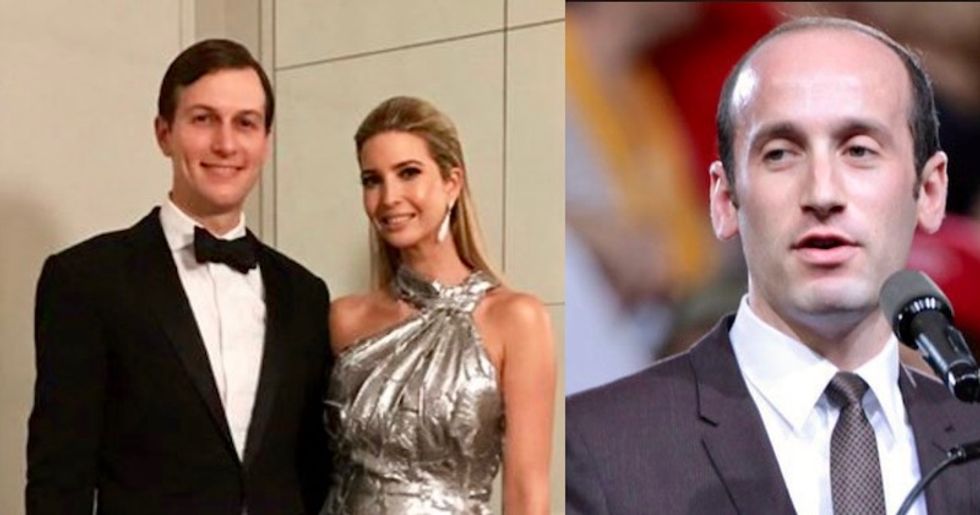 President Donald Trump addressed the nation in a rare Oval Office speech, in an attempt that immediately failed to calm the American people and the markets. Trump not only did not assuage fears, he expanded them by not sharing the full truth of the coronavirus pandemic, by framing the virus as a "foreign" attack, and by telegraphing falsehoods further damaging his and his administration's credibility.

The President chose to spend Wednesday with the top executives of the nation's biggest banks on Wednesday. They "played to the president's ego - told him the fundamentals of the economy are strong and that he made it that way - but that the psychology of the public needs to change," according to The New York Times' Maggie Haberman.

That was part of what helped move the president toward giving a public address. Those executives share his view - h… https://t.co/VBteohojVY
— Maggie Haberman (@Maggie Haberman) 1583968524.0

That's why Trump delivered his disastrous prime time Oval Office speech Wednesday night, which did anything but what he had hoped to accomplish.

The markets were actually poised to open Thursday morning up hundreds of points, a small improvement over weeks of near-daily triple and quadruple point drops.

And as Trump began speaking to the American people, the markets heard what he was saying – and not saying – and futures tanked.

DOW futures dropped over 1000 points within minutes of Trump finishing his short speech.

And just minutes into Thursday's open, the DOW dropped so far it triggered an automatic "circuit breaker," pausing trading for 15 minutes. As of this writing the DOW is down over 1800 points, on top of Wednesday's 1400 point drop.

What President Trump was saying – and not saying – was the result of his decision to turn to the two people he often turns to in a crisis: His 39-year old son-in-law who he made Senior Advisor to the President, Jared Kushner, and his 34-year old senior advisor for policy, the white nationalist Stephen Miller.

Calling it "vintage Trump," The New York Times reports the President "blamed European and Chinese people for bringing the outbreak to the United States, describing it ominously as a 'foreign virus,' language that reflected the isolationist views of his chief speechwriter, Stephen Miller, who alongside Jared Kushner, the president’s son-in-law, helped draft the address."

Trump also "repeated another theme — that he viewed the virus as something that was inflicted upon him from a foreign country. He wanted to discuss 'our nation’s unprecedented response to the coronavirus outbreak that started in China and is now spreading throughout the world,' he said."

It's no wonder, given the people Trump turned to to write his speech, that it was riddled with errors – important error that have injected fear – more fear – into the hearts of Americans.

For example, Trump said his ban on all travel into the U.S. from Europe, with an exemption to the U.K., where he owns several golf resorts, applied to almost all.

"To keep new cases from entering our shores, we will be suspending all travel from Europe to the United States for the next 30 days," Trump told the American people Wednesday night. "There will be exemptions for Americans who have undergone appropriate screenings, and these prohibitions will not only apply to the tremendous amount of trade and cargo, but various other things as we get approval.  Anything coming from Europe to the United States is what we are discussing. "

Those weren't the only falsehoods Trump told America in his prime time address.

And this: A Fox News reporter posted this tweet, which Trump retweeted.

It's false, as several have pointed out:

Meanwhile, back to Jared.

"According to Politico, President Trump is delaying his decision on whether or not to declare a national emergency to combat the spread of coronavirus on the expert public-health opinion of fellow real-estate developer and fortunate son Jared Kushner," New York Magazine's Matt Stieb writes. "Trump is holding off on a national emergency decision until Kushner 'finishes his research and comes to a conclusion himself.'"

As the government continues to botch testing and fail to flatten the outbreak curve, one imagines Kushner’s preparation this time around: working from home in Kalorama, watching Contagion, and Googling “Ken Burns Spanish Flu.”