No mask, no mistake for North Korea's Kim 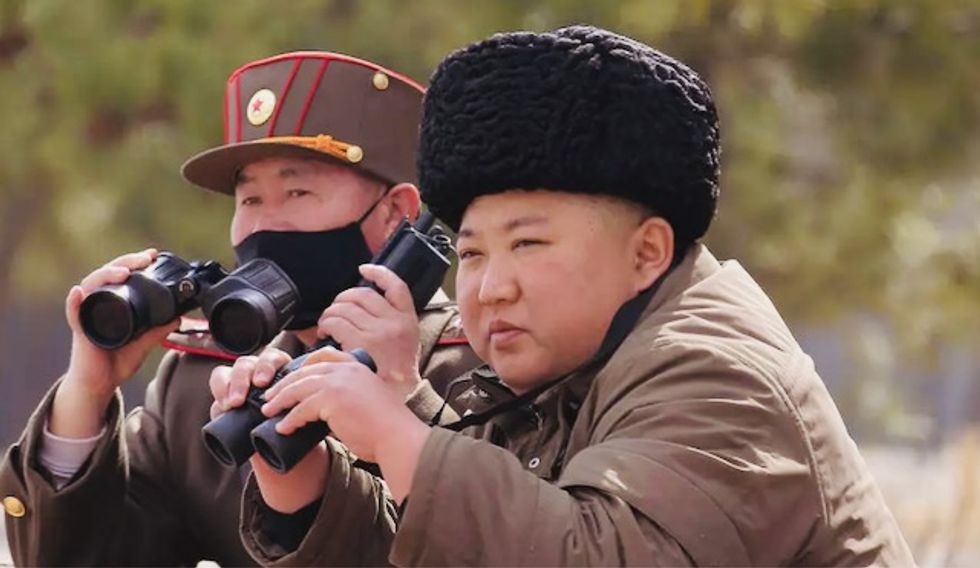 As he watches his troops firing rockets and artillery shells, one of the many things that marks North Korean leader Kim Jong Un out from the officers alongside him is his coronavirus mask: it isn't there.

Kim has overseen multiple military drills in recent weeks as Pyongyang mounts an all-out drive to prevent an outbreak of the disease that has swept around the world from neighbouring China.

Thousands have been quarantined and hundreds of foreigners, including diplomats, confined to their residences.

The Rodong Sinmun newspaper, mouthpiece of the ruling party, and official news agency KCNA have shown Kim supervising firing exercises from a trench, tent or shelter four times in the last two weeks.

Every time he has had his face uncovered under a black fur hat, while all the officers next to him have worn black masks.

The North carefully controls and calibrates imagery of Kim, and analysts said his uncovered features send an intended message.

"He may want to show people that he is not afraid of the virus, that he is above infection," said Rachel Minyoung Lee, senior analyst with specialist site NK News.

"It is consistent with the crux of North Korea's leadership propaganda: that the Kim leadership is exceptional in every way."

There would be no sense he was contradicting the official virus guidance, she added: "North Koreans know that he is in an altogether different league."

Koh Yu-hwan, a professor of North Korean studies at Dongguk University, said an image of Kim wearing a mask could risk "undermining his charisma... as if he is some sort of a coward, afraid of catching the virus for his own sake.

"They aimed to project an image of Kim impervious to the coronavirus as the leader of the Paektu bloodline."

The "Paektu bloodline" is a term for the Kim family who have ruled the North for three generations.

It references the sacred mountain seen as the spiritual birthplace of the Korean people, where the North's founder Kim Il Sung is said to have fought Japanese occupiers during World War II.

Kim was twice last year pictured riding a white horse up Mount Paektu in what was seen as a symbolic appropriation of his grandfather's leadership image.

The North often plays up physical and other similarities between the two men, and the fur hat Kim has been wearing in recent photos recalls old images of Kim Il Sung, including one reproduced on a stamp in 2013.

"It looks like he is going for his grandpa's fashion again," said Lee.