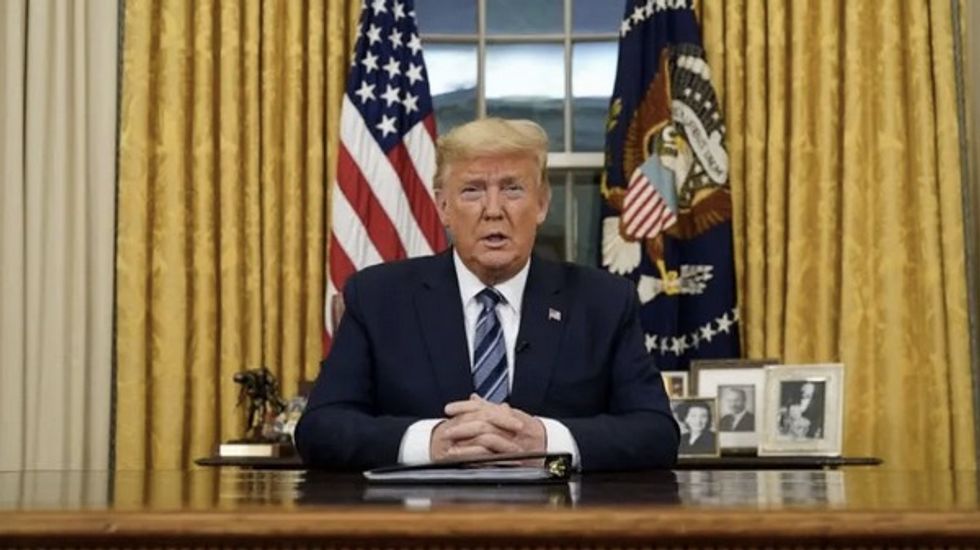 Trump during the special broadcast on Wednesday

Travellers also scrambled to rebook flights to beat the Friday 12 midnight deadline when European flights will be banned from landing in the US.

Trump ordered travel from Europe to the United States restricted for 30 days, responding to mounting pressure to take action against a rapidly spreading coronavirus outbreak disrupting nearly all corners of U.S. daily life.

“We are marshalling the full power of the federal government and the private sector to protect the American people,” Trump said in a prime-time televised address from the Oval Office on Wednesday.

“This is the most aggressive and comprehensive effort to confront a foreign virus in modern history.”

The flight ban does not apply to Britain, or to Americans undergoing “appropriate screenings,” Trump said.

After triggering confusion by suggesting trade with Europe would also be suspended, Trump clarified that “trade will in no way be affected.”

“The restriction stops people not goods,” he said on Twitter moments after his speech.

The surprise restrictions sent financial markets tumbling, with Euro Stoxx 50 futures plunging 8.3% to their lowest levels since mid-2016. U.S. stock futures were down more than 4%.

In Asia, MSCI’s broadest index of Asia-Pacific shares outside Japan fell 3.2 per cent and touched its lowest level since early 2019, while Japan’s Nikkei crumbled 5.3 per cent. Domestic benchmarks fell the most on record in terms of biggest single-day fall in absolute terms to hit over two year lows. The Sensex plummeted as much as 7.58 per cent or 2,707 points and the Nifty 50 index plunged as much as 810 points or 7.74 per cent.

“Already we know the economic impact is significant, and with this additional measure on top it’s just going to multiply the impact across businesses,” said Khoon Goh, head of Asia Research at ANZ in Singapore. “This is something that markets had not factored in … it’s a huge near-term economic cost.”

Trump said his government had been in frequent contact with U.S. allies about the restriction, but European Union officials were not notified about it ahead of time, said one diplomat.