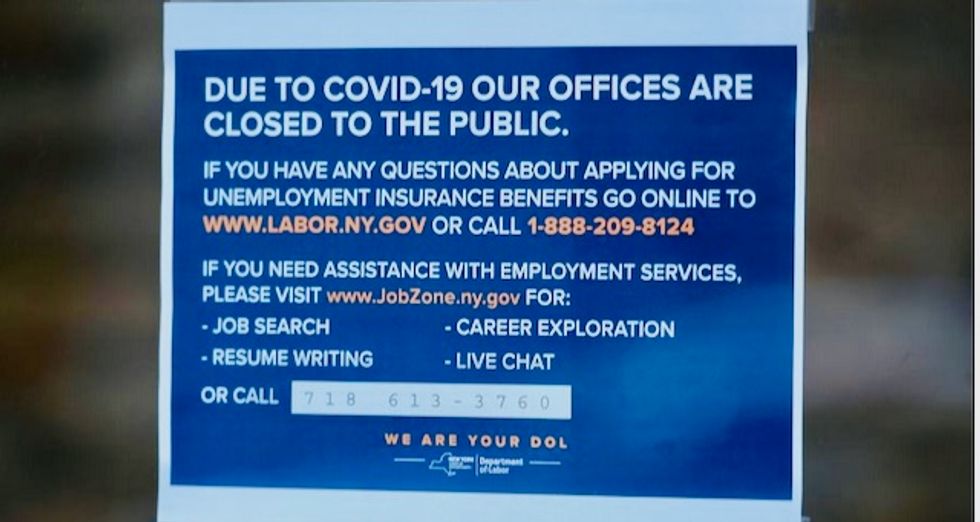 A sign is seen in front of the closed Department of Labor on March 25, 2020 in New York (Angela Weiss/AFP)

Deal reached in the Senate, says Chuck Schumer, contains "unemployment insurance on steroids" to help with the crisis.

A drastic spike in unemployment across the U.S. is causing state servers to crash as an unprecedented number of Americansfile claims due to the economic slowdown from the coronavirus outbreak spreading nationwide.

The surge in filings comes even as a bipartisan agreement in the U.S. Senate overnight seeks to provide a significant boost in unemployment benefits to help stem the financial pain of millions who now find themselves out of work.

Unemployment claims across the U.S. are causing state servers to crash as an unprecedented number of Americans seek benefits related to losing work due to the economic slowdown from the coronavirus outbreak that is spreading around the country, even as legislation advancing in Congress provides a spike in funding for those out of work.

"At the end of the day, given the fact that we have an unprecedented economic crisis, some people are suggesting that unemployment might go above 20%, 25% by the end of June, we have an unprecedented health care crisis, it's clear to me that we have got to move as aggressively as we possibly can to protect working families in this country," Sen. Bernie Sanders (I-Vt.) a candidate for the 2020 Democratic presidential nomination, told PBS Newshour's Judy Woodruff on Tuesday.

States across the country are seeing a surge in unemployment insurance claims that are shutting down servers, as Bloomberg reported Wednesday.

"Across America, state-run insurance systems are buckling under the weight of the new coronavirus' economic fallout," reported Bloomberg. "National jobless claims last week saw the biggest spike since the aftermath of Hurricane Sandy eight years ago, jumping 33% to 281,000. This Thursday's figure could be as high as 3 million—quadruple the record set in 1982—according to S&P Global Ratings."

State unemployment insurance websites are crashing under the COVID strain & many funds are pressed for cash. One re… https://t.co/AAhOAE7MNx
— District Sentinel (@District Sentinel)1585136784.0

As EPI's Aaron Sojourner and Paul Goldsmith-Pinkham wrote Tuesday, those numbers likely paint an incomplete picture of the scope of the problem:

The number of new unemployment insurance claims is a narrow measure of unemployment and underemployment. Not everyone who is unemployed can claim benefits, and many states' UI offices were overwhelmed by the surge in demand this past week, so not all claims could be accepted. The true impacts are undoubtedly of larger scale than described here. Further, unemployment insurance benefits replace less than half of families' usual income.

The Senate bill, which at $2 trillion is the largest such legislation in history, reportedly contains provisions allowing for extending unemployment insurance for 13 weeks and a four month boost in benefits.

In a "Dear Colleague" letter (pdf) to his fellow Democrats on Wednesday, Schumer laid out the terms by which unemplyoment benefits were improving.

"The extended UI program in this agreement increases the maximum unemployment benefit by $600 per week and ensures that laid-off workers, on average, will receive their full pay for four months," wrote Schumer. "It ensures that all workers are protected whether they work for businesses small, medium or large, along with self-employed and workers in the gig economy."

EPI delivered more dire news on Wednesday, as researchers Julia Wolfe and David Cooper predicted that by the summer, 14 million Americans will be out of work.

"Congress is debating an economic stimulus package around $2 trillion, and if it is targeted enough, it could help mitigate some of these losses," said Wolfe and Cooper. "Yet even with these measures, many people will still need to remain out of work, potentially for months, in order to stop the virus’s spread."

Sanders, in his interview with Woodruff, said that "there will be a massive, unprecedented expansion of unemployment compensation, which includes workers who today are not covered by unemployment" under the bill. The senator added that the top priority for lawmakers remains public health.

"Money is money. Life is life," said Sanders. "People die, you know, that's not what we want. So, the first priority has got to be to protect the health of the American people, and then we have to rebuild the economy."

by
Eoin Higgins, staff writer
Photo: A sign is seen in front of the closed Department of Labor on March 25, 2020 in New York

According to a report from CNN, the House select committee investigating the Jan 6th riot that sent lawmakers fleeing for their lives is looking at more than Donald Trump's possible involvement in plotting the insurrection, but also if there were any financial shenanigans tied to the "Save America" rally and march on the Capitol that followed.

CNN is reporting that the committee has designated five different investigative teams -- each identified by a color -- with "red" 'blue" and "gold" teams "...examining everything from the motivation of participants, whether there was coordination between groups, and whether Trump used his executive authority to pressure lawmakers, former Vice President Mike Pence and the Justice Department."