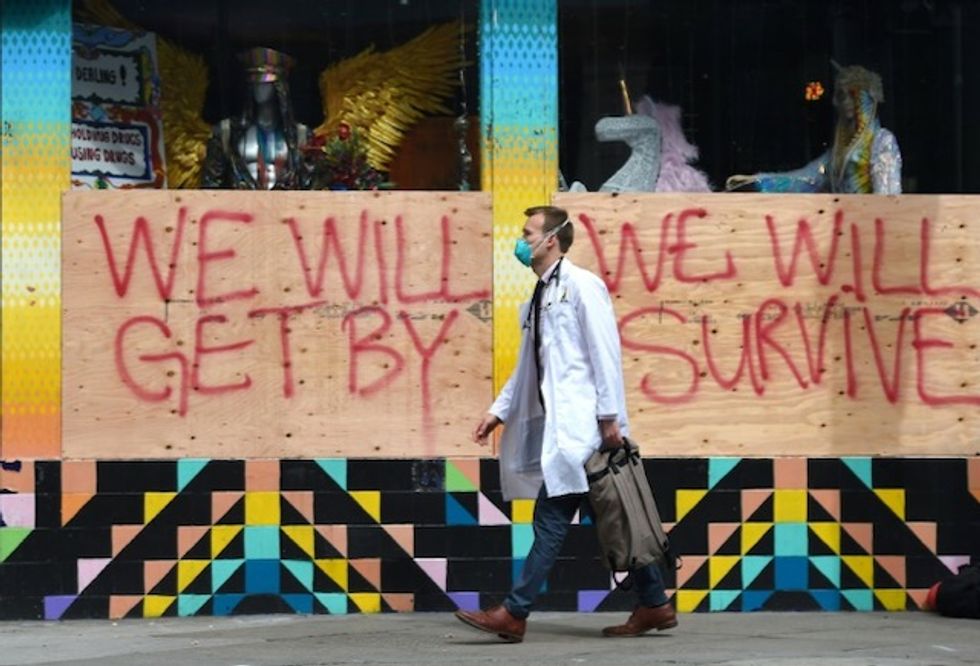 The United States and Britain led a multi-billion-dollar global fightback against economic havoc wreaked by the coronavirus as the European Union shut its borders to travellers from outside for 30 days to stem the pandemic's ferocious spread.

The sweeping measures, never before seen in peacetime, have upended society worldwide and roiled financial markets on fears of a global recession.

The coronavirus outbreak, which first emerged in China late last year, has quickly marched across the globe, infecting nearly 200,000 people and killing 7,900 as governments scramble to contain it.

Following criticism that they were mismanaging their crisis response, London and Washington on Tuesday announced massive economic stimulus packages.

President Donald Trump said the White House was discussing a "substantial" spending bill with Congress that would include immediate cash payments to Americans.

Officials did not give hard numbers but The Washington Post reported the amount could reach $850 billion, with a chunk destined for airlines fearing ruin.

European countries were already in near-total internal lockdown, with Belgium starting from Wednesday until at least April 5.

The World Health Organization urged the "boldest actions" on the continent, the pandemic's latest epicentre.

Cases in Australia rose to 565, as Prime Minister Scott Morrison's government urged citizens to not travel abroad and banned gatherings of more than 100 people.

Asian hotspots China and South Korea have seen new infections and deaths level out in recent weeks -- China reported just one new domestic case for the second consecutive day on Wednesday -- but numbers are ballooning across Europe.

Africa, with its fragile healthcare systems, has also recorded more than 400 cases, and Latin America has more than 1,100, with the continent's most populated country Brazil confirming its first death on Tuesday.

Trump, who for weeks has been accused of playing down the crisis, appeared determined to take control of his messaging, declaring he would do everything to fight an "invisible enemy".

"We have to win this war," he said at the White House, where staff and journalists now have to undergo regular temperature checks.

Battered US stocks -- which Trump considers a key metric of his success ahead of the November presidential election -- closed higher after the stimulus announcement.

But markets dipped again in Asia on Wednesday despite that rally.

Trump had acknowledged on Monday that the economy might be sliding into recession.

In France, President Emmanuel Macron also likened the outbreak to war and ordered almost the entire population to stay at home for at least two weeks.

Britain stepped up its own measures following scientific advice that infections and deaths would spiral without drastic action.

Citizens were told to avoid all non-essential overseas travel and large social gatherings, with more stringent restrictions expected in the coming days.

Germany has banned gatherings in churches, mosques and synagogues and said playgrounds and non-essential shops would close, too.

In Ireland, Anthony Whyte, 49, looked out onto the cobbled streets of Dublin from a bar and likened the scene to "a ghost town".

Following a hammering in recent days, US and European markets bounced back.

Despite the wild swings, Treasury Secretary Steven Mnuchin ruled out a temporary closure of stock markets, saying "Americans need to know they have access to their money".

G7 leaders have vowed to "do whatever it takes" to prevent a financial meltdown.

However, every sector from tourism to food to aviation is affected as the global economy effectively goes into shutdown.

Italy announced plans to renationalise Alitalia, and France said it was ready to nationalise large companies if necessary.

The outbreak has wrecked the global sporting calendar. The European football championship was on Tuesday postponed until next year and the Tokyo Olympics -- due to start in July -- hang in the balance, though Japanese officials insist the event will go ahead.

The French Open was postponed on Tuesday. It is now scheduled to start in September instead of May.

Drugmakers are scrambling for a breakthrough, and it could still take more than a year before a safe vaccine is ready to market. US officials have said the first human trial for a possible vaccine has begun.

French pharmaceutical giant Sanofi and American drugmaker Regeneron said they had started clinical trials for Kevzara, a drug currently used to treat rheumatoid arthritis and which they hope will reduce lung inflammation in severe cases of coronavirus illness.