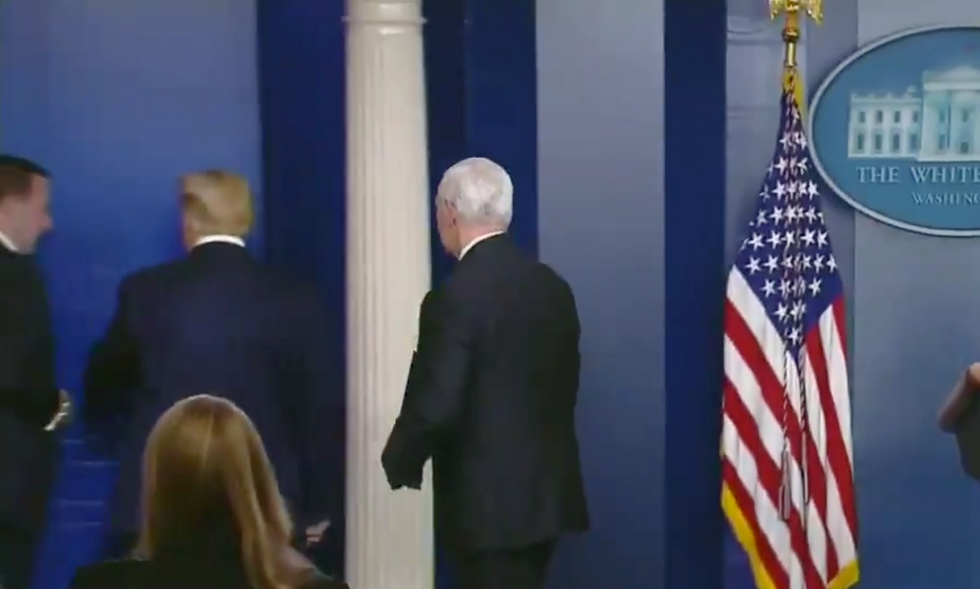 After a brutal day of criticism over his Thursday remarks suggesting an injection of disinfectant could potentially help treat COVID-19 — a frankly ludicrous and dangerous suggestion that experts roundly warned against — the president cut Friday's coronavirus press briefing short without taking questions.

It was a welcome change. Trump has turned the daily briefings into psychological replacements for his campaign rallies — now postponed until the pandemic subsides — and they frequently feature strings of falsehoods and lies along with attacks on the media. Networks have been harshly criticized for airing the festivals of disinformation live, so no one should complain that Friday's spectacle was cut short.

But it was a revealing change, suggesting that Trump may feel embarrassed by his remarks. His allies tried to deflect criticism of his outrageous suggestions, with minimal success. So at a meeting with reporters Friday afternoon in the Oval Office, Trump tried to claim his suggestion was sarcastic, an explanation few if any found at all credible.

So when Vice President Mike Pence wrapped up his remarks at the end of the briefing on Friday, reporters called out for Trump to answer questions. Instead, the president, vice president, and other officials simply walked out the door, leaving reporters, who are used to Trump's desperation for attention, stunned.

"Is now the time for sarcasm?" one asked, receiving no response.

Axios reporter Jonathan Swan reported that Trump plans to scale back the number and length of the briefings going forward, apparently having learned that they don't showcase him at his best. The report even suggested that the disinfectant remark might have been the trigger for Trump's decision:

President Trump plans to pare back his coronavirus press conferences, according to four sources familiar with the internal deliberations. He may stop appearing daily and make shorter appearances when he does, the sources said — a practice that may have started with Friday's unusually short briefing.

Another source close to the deliberations said there simply isn't enough new material to justify Trump appearing before the press every day. "I mean, you wonder how we got to the point where you're talking about injecting disinfectant?" the source wondered aloud.

Of course, if Trump does genuinely feel shame, it's not likely to last long. He'll likely revert to his vastly overconfident self in short order.

Wow. The briefing ends without Trump even taking questions. He must not have wanted to talk about the therapeutic p… https://t.co/cIYVUb7hj9
— Aaron Rupar (@Aaron Rupar) 1587765925.0