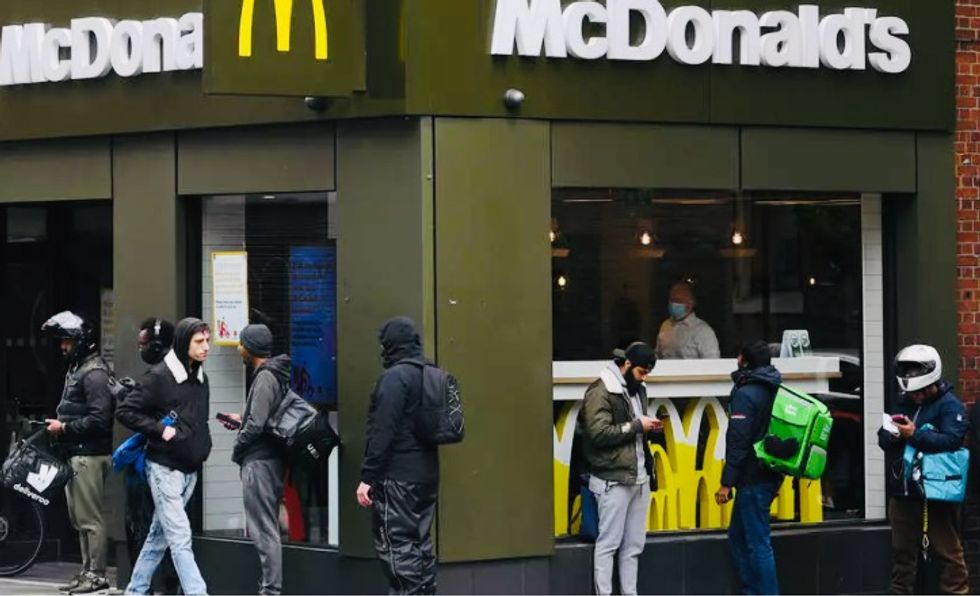 Delivery riders queue outside a McDonald's in London; the company is facing a sexual harassment complaint filed at the OECD by an international coalition of labor unions DANIEL LEAL-OLIVAS AFP/File

An international group of labor unions said Monday it has filed a complaint against McDonald's for "systemic sexual harassment" at the fast food chain's restaurants around the world.

The complaint, filed at the Organization for Economic Cooperation and Development (OECD)'s offices in the Netherlands, was the first of its kind to target a multinational company, its authors said.

"McDonald's workers have sounded the alarm about sexual harassment and gender-based violence for years, but a company with a culture rotten from the top has failed to take meaningful action to address the problem," Sue Longley, general secretary of the International Union of Foodworkers, said in a statement.

"Because McDonald's has neglected to act to create a safe workplace, the Dutch government should make use of this complaint to empower workers to effectively address the rampant harassment they face under the Golden Arches," she said.

The complaint also targets two investment banks, APG Asset Management of the Netherlands and Norges Bank of Norway, which together have holdings worth $1.7 billion in the food giant.

The complainants noted that the OECD's own guidelines "require due diligence by institutional shareholders in companies to ensure responsible business conduct."

The unions said it was the "first-ever complaint brought to the OECD to take aim at systematic sexual harassment at a multinational company."

It said the victims, some as young as 16, "said they were ignored, mocked, or punished when they reported it. Some had their hours cut back and others were fired."

It also cited cases of "touching, forced kissing and other forms of unwanted bodily contact" in branches of the food chain in numerous countries including the United States, Britain, Australia, Brazil, Chile, Colombia, France, among others.

In France, it cited a case in which a McDonald's manager allegedly "installed a cellphone camera in the women's changing room, and secretly filmed young women changing their clothes."

"Gender-based violence and harassment is part of McDonald's culture," the complaint alleged.

McDonald's said in a statement it would review the complaint when it had received it, stressing that the food giant is a "people-first company.

"There is a deeply important conversation around safe and respectful workplaces in communities throughout the US and around the world," the company said.

"Around the world we believe that McDonald's and its business partners have a responsibility to take action on this issue and are committed to promoting positive change," it added.

The complaint will be examined by the Dutch government, which has up to three months to decide whether to launch a process of mediation with the company.

The unions, which include the European Federation of Food, Agriculture and Tourism Trade Unions and the Service Employees International Union of the United States and Canada, said they brought the case in the Netherlands because in the United States, where the company is headquartered, McDonald's "insists it has no responsibility for employment conditions, employment relations, or workplace abuses in the more than 90 percent of its stores operated by franchisees."

The unions chose the Netherlands because it is the "nerve center" of the fast food giant's European operations, and also the headquarters of APG bank.