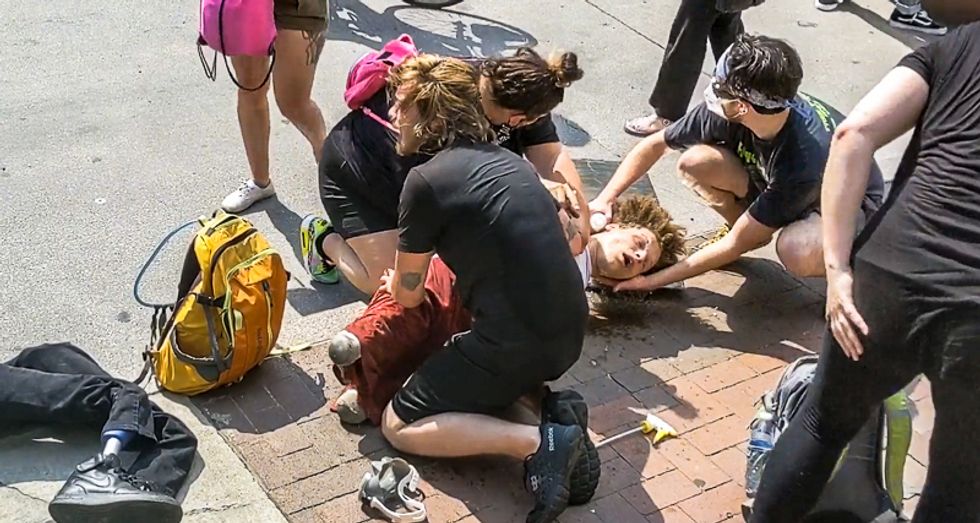 The Columbus Police Department this week denied that its officers ripped the prosthetic legs off a double amputee.

However, video released by the police to prove their case was far from conclusive.

The Columbus Dispatch reports that the Columbus Police Department on Monday night gave their own explanation for an incident that left a double amputee protester lying on the ground without his prosthetic legs and writhing after being hit with pepper spray.

"In the police version, captured Sunday afternoon by the body cameras of three officers and a pole-mounted video camera at the southeast corner of Broad and High streets, the unidentified man is seen standing and throwing water bottles, then two large plywood signs at officers," the Dispatch writes. "Video shows the shirtless man with prosthetic legs hurl a 4-foot tall sign, grazing the head and neck of an officer, who was not seriously hurt. At least one officer who saw the attack ran to the man and tackled him, trying to make an arrest. Pepper spray was used on nearby protesters."

However, no video released by police shows how the man's prosthetic limbs were actually pulled off, even though the officers involved have categorically denied having done so.

Columbus Police Sgt. Charles Fuqua said that officers "likely didn’t know the man was a double amputee and that it wasn’t relevant" to how they handled him, the Dispatch reports.

Watch the full police presentation on the incident below.