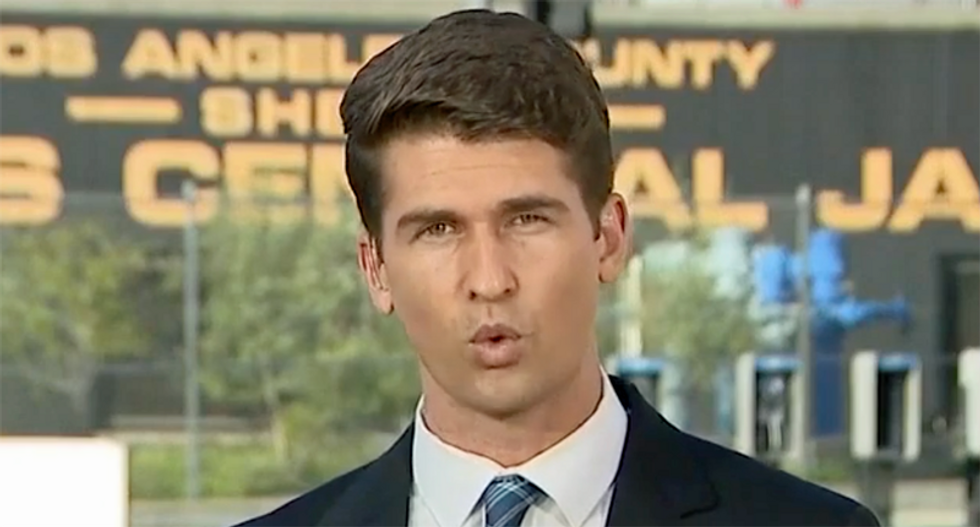 Bill Melugin of Fox LA was ridiculed on Tuesday after a story he pushed fell apart.

On Monday evening, Melugin tweeting a story crazy story, complete with a quote from the LAPD police union.

@LAPPL tells me: “This disgusting assault on a police officer was carried out by someone with hatred in their heart… https://t.co/IQkqN2dLdB
— Bill Melugin (@Bill Melugin)1592883604.0

The story immediately struck many people as absurd, especially in light of the fake Shake Shack poisoning that was pushed by New York police unions.

And then the story began to fall apart.

Women called BS on the story.

And then the story unraveled further when it reveals the off-duty officer was not in uniform.

Then the Starbucks was inside a Target store and the company released a statement that they found "no suspicious behavior" after reviewing surveillance footage.

Melugin was harshly mocked for believing the police union claims. Here's some of what people were saying:

@BillFOXLA Irresponsible running these stories before getting the facts. It isn’t just Shake Shack. Cops have been… https://t.co/3RTp4KuqZi
— Alex Stein (@Alex Stein)1592942896.0

@BillFOXLA Irresponsible running these stories before getting the facts. It isn’t just Shake Shack. Cops have been… https://t.co/3RTp4KuqZi
— Alex Stein (@Alex Stein)1592942896.0

@BillFOXLA Translation: another lie to make cops look like victims and the general public look like monsters. Got it. 👍
— Steph (@Steph)1592943383.0

@BillFOXLA If only a real journalist had done any investigation before pushing this story in order to get ad clicks
— Ned Pyle (@Ned Pyle)1592944079.0

The sheriffs department that killed Andres Guardado for no reason managed to change the subject for 2 days with thi… https://t.co/58Lan8ecSh
— Andrew Perez (@Andrew Perez)1592944526.0

has someone made a decent list of all the asinine shit like this cops have lied about over the last few years, whic… https://t.co/uVEgHhzKrB
— hello.jpg (@hello.jpg)1592947054.0