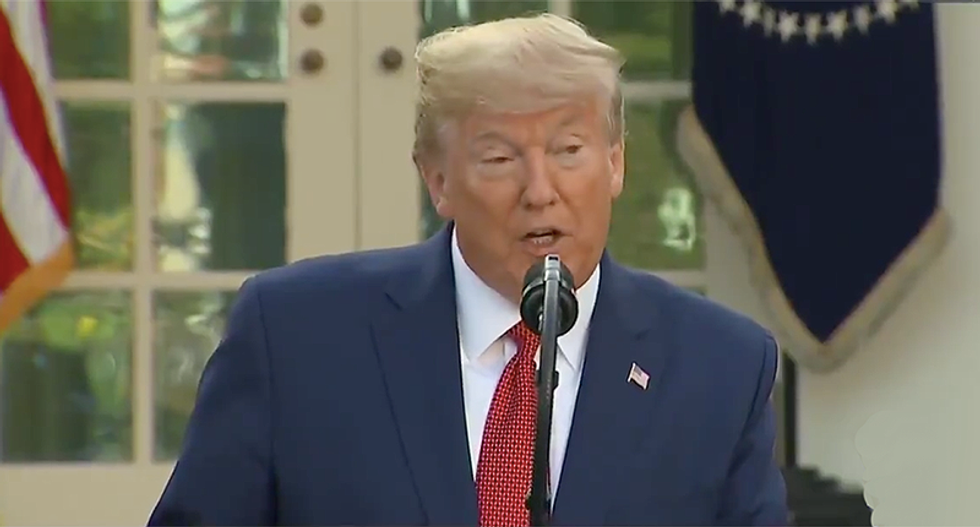 President Donald Trump was criticized as being "low energy" during his Rose Garden announcement on police brutality Tuesday.

After meeting with the families of some of the people of color killed by police, Trump welcomed officers, but not the families, to a press event to announce his executive order. It sparked questions as to why the families didn't attend and if they were invited or if they refused to support Trump's new policy.

But Trump soon riffed on the protests, attacking them as rioters and looters. He followed by bragging about the stimulus bill that Democrats worked to negotiate with Senate Republicans and Steve Mnuchin.

He then tried to claim that "school choice" was all about civil rights so families can bus children miles away instead of mandating that all schools in all communities be improved and equalized. He went on to call it the biggest civil rights issue of our time, ignoring the actual Civil Rights Movement.

He then took a moment to blast President Barack Obama and Vice President Joe Biden for "never trying" to fix the policing problem, which PBS reporter Yamiche Alcindor fact-checked as untrue.

In fact, Trump tore down the Obama administration's work on police reform.

"Under Obama, 14 consent decrees were enforced upon troubled and discriminatory police agencies. By contrast, none have been issued in the more than three years of the Trump administration," said The Guardian.

Trump frequently describes his executive orders as if they do more than they do. We're still waiting for a final te… https://t.co/zOVI0lg09m
— Daniel Dale (@Daniel Dale)1592325689.0

Trump claims Obama and Biden "never even tried" to address these problems during their eight years in office. That's not true at all.
— Daniel Dale (@Daniel Dale)1592325298.0

@JoyAnnReid Trump is rambling on and on about whatever is rolling around in his head. Pathetic! #25thAmendmentNow
— Jeff (@Jeff)1592325424.0

Trump’s speech regarding the EO in law enforcement reform deteriorates into a rambling campaign piece on various to… https://t.co/KAW5YFKyXC
— J.J. Hensley (@J.J. Hensley)1592325444.0

@ProjectLincoln I am listening to this blustering buffoon 'live' from the White House lawn, but it's difficult to m… https://t.co/jn29ktEl3s
— Mark Irvine (@Mark Irvine)1592325310.0

tRump is off his meds again. He is riffing on everything, incoherent, rambling, off teleprompter, the AIDS vaccine… https://t.co/1LDFnyalsV
— Mike Atsalinos (@Mike Atsalinos)1592325715.0

Whenever Trump starts rambling off like this I expect him to rant about when 'the Germans bombed Pearl Harbor' 🤮 https://t.co/eSgmYZwYkf
— Allan Margolin (@Allan Margolin)1592325723.0

What in the HELL is this idiot ( tRump? talking about? He is rambling! This is supposed to be about police reform, isn't it???
— frederick grigsby (@frederick grigsby)1592325337.0