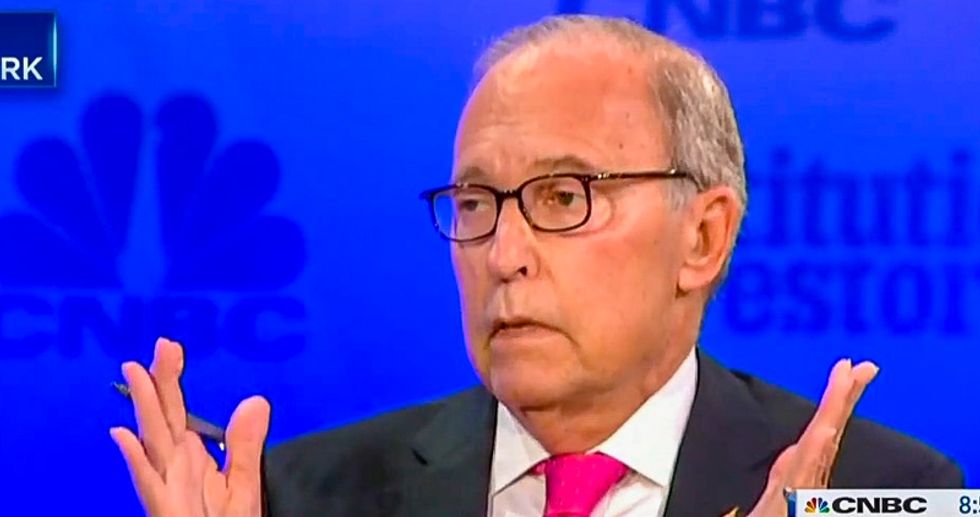 With the U.S. jobless rate still at levels not seen since the Great Depression and coronavirus-induced mass layoffs continuing across the nation, millionaire White House economic adviser Larry Kudlow complained Sunday that the $600-per-week increase in unemployment insurance authorized by the CARES Act is too generous and said the benefits should expire at the end of July.

"I mean, we're paying people not to work. It's better than their salaries would get," Kudlow said in an appearance on CNN, echoing the common Republican complaint that many U.S. workers are earning slightly more on the boosted unemployment insurance than they would at their low-wage jobs. Progressive lawmakers and economists have argued that the solution is to raise wages, not slash benefits.

Kudlow predicted that Congress will not extend the enhanced unemployment benefits past the July 31 expiration date and said the Trump administration is "looking at a reform measure that will still provide some kind of bonus for returning to work, but it will not be as large."

Economists have repeatedly warned in recent days that prematurely ending financial relief for laid-off workers could have disastrous consequences for millions of people and hinder the broader economic recovery.

In the face of widespread economic pain and insecurity, the extra unemployment insurance has served as a lifeline for those lucky enough to have actually received the benefits to which they are entitled by law. Former Treasury Department economist Ernie Tedeschi has estimated that ending the enhanced unemployment benefits on July 31 would result in a "pay cut of 50-75% overnight" for millions of people.

Josh Bivens and Heidi Shierholz of the Economic Policy Institute argued in a blog post last month that "for the purpose of generating a rapid macroeconomic recovery from this shock, the more money getting into the pockets of low- and moderate-wage workers, the better."

"Without generous relief, these workers and their families would have had to run down meager savings and go into debt just to survive during the lockdown period," Bivens and Shierholz wrote. "Besides causing avoidable human misery, this would severely hamper spending—and, by extension, the overall economic recovery—when the public health all-clear is eventually sounded."

"The extra $600 is smart and compassionate and policymakers should extend all (or at least most) of this extra boost well past July—at least until unemployment is falling rapidly and at a manageable level," the economists added.

As Common Dreams reported, Trump administration officials and Republican members of Congress took something of a victory lap following the Bureau of Labor Statistics' (BLS) June 5 jobs report showing that the unemployment rate declined slightly between April and May. The BLS found that the jobless rate remains at a staggering 16%—a fact that did not stop Republican lawmakers from using the report to declare that additional coronavirus relief is no longer needed.

Sen. Ron Wyden (D-Ore.), one of the architects of the enhanced unemployment insurance, ripped the Trump administration and the GOP last week for "declaring 'mission accomplished' in response" to the BLS report.

"Even if millions of Americans go back to work, if millions of Americans lose their supercharged benefits and are abruptly unable to pay their bills, the economy will not rebound," Wyden warned during a conference call with workers and activists. "Things will get worse and I fear that families will find themselves in increasingly dire straits. Congress cannot abandon families in the midst of this ongoing economic crisis."