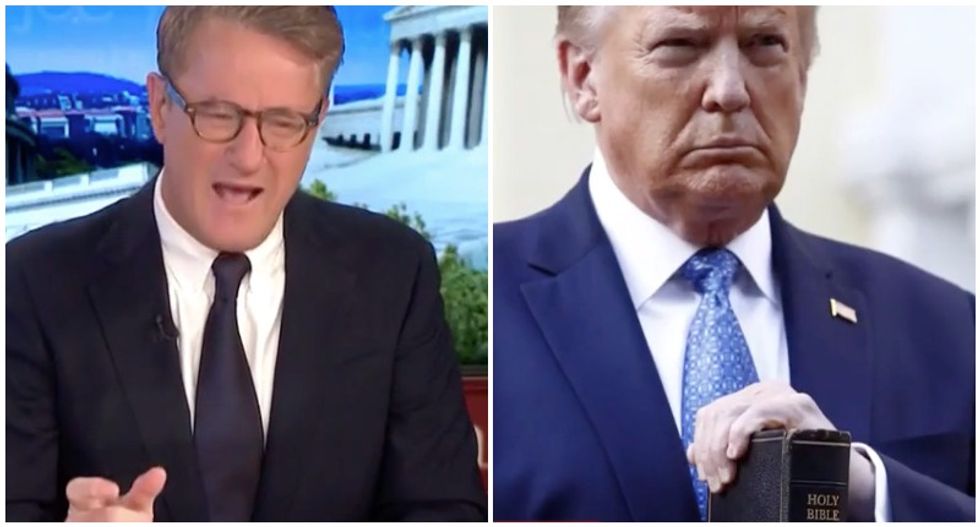 MSNBC's Joe Scarborough blasted President Donald Trump for ordering the gassing of peaceful protesters to get a photograph of himself awkwardly holding a Bible at a church damaged by vandals.

The "Morning Joe" shamed Republicans for "lying" about the brutal dispersal of protesters against police violence, and he accused the president of starting a riot.

"Americans aren't buying it," Scarborough said. "Donald Trump is not playing three-dimensional chess, he's eating the chess pieces and it's not going well."

"So many people have been saying law and order would work for Donald Trump, it's going to be just like 1968," he added. "Here's the problem: Donald Trump is the incumbent. This is all happening on Donald Trump's watch. When he the first night started talking about shooting people, president of the United States is calling protesters thugs, it's -- it's ginning things up."

The president has faced widespread criticism for inflaming tensions during the nationwide protests, and poll numbers show Americans aren't impressed.

"Even the pope's telling him to cut it out." Scarborough said. "Republicans are telling him, some Republicans, to cut it out, this is not working, and the biggest surprise to me is, I know that they're stupid. A lot of these people around the president are stupid, that's the only reason they're there, because they will do whatever he tells them to do. What I didn't realize is that some of them are so stupid that they were actually congratulating themselves after Donald Trump started a riot in the President's Park, in Lafayette Park, so he could have a photo-op and awkwardly, weirdly, bizarrely hold a Bible like nobody has ever held a Bible before, like in a political event. It's just bizarre, holding it upside-down at one point."