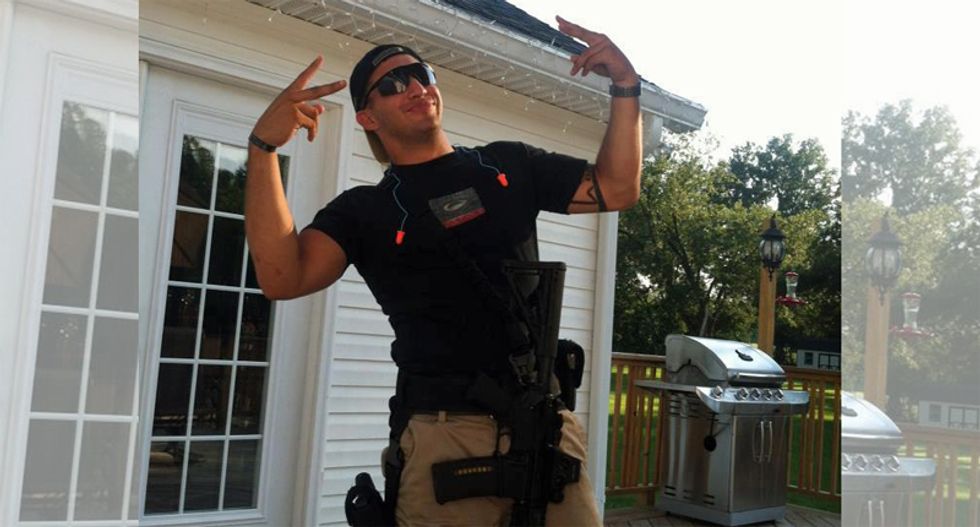 "A formidably armed man with a Nazi tattoo who tried to march alongside police at a Black Lives Matter protest in Las Vegas is facing a charge of impersonating a federal officer," the Las Vegas Review-Journal reported Friday. "Zachary Sanns was spotted at a rally that moved along Fremont and 7th streets late last month, wearing plain clothes, a tactical vest, a ballistic helmet and night-vision goggles, according to a federal complaint filed this week."

"Sanns, who faces one count of false impersonation of an officer or employee of the United States, had driven to the protest in a black Chevy Tahoe with blue lights in the grill activated, the complaint stated," the newspaper noted.

“The manner in which this subject was dressed is nearly identical to how a plainclothes local and federal law enforcement officer would be in this situation," the criminal complaint read.

Chase Stevens, a photographer for the newspaper, noticed the tattoo.

Sanns had served in the Marine Corps and worked as a Department of Defense contractor.

The local CBS affiliate reports Sanns is married to a Metro Police officer.