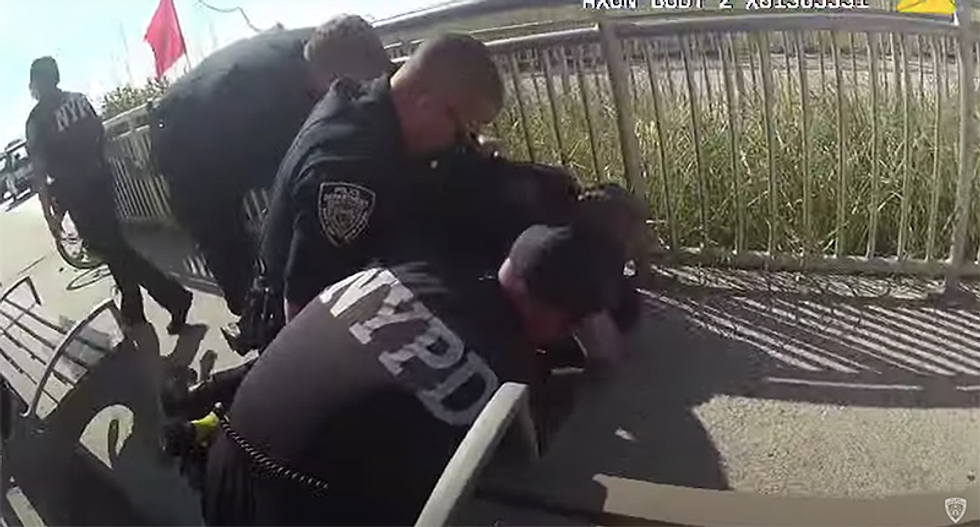 The New York Police Commissioner has suspended an officer without pay after the officer used an illegal chokehold, Bronx News 12 reported Sunday evening.

The incident happened Sunday at Far Rockaway Beach, and it was captured on video. The officer used a chokehold on an unarmed Black man.

"Accountability in policing is essential. After a swift investigation by the Internal Affairs Bureau, a police officer involved in a disturbing apparent chokehold incident in Queens has been suspended without pay," Commissioner Dermot Shea said in a statement. "While a full investigation is still underway, there is no question in my mind that this immediate action is necessary. We are committed to transparency as this process continues."

The Internal Affairs Bureau was investigating the use of force the officer employed during the incident, but Shea made the decision after watching the body camera footage that was released by the NYPD.

The NYPD released the 35-minute video of the incident to YouTube.

"Yo! Stop choking him, bro!" A man also filming the incident can be heard screaming. "He's choking him!"

The video shows three officers taking the man down, one of which puts his arm around the man's throat while he was on the ground being handcuffed.

"This matter is taken extremely seriously, and updates will be shared with the public as the investigation unfolds," the NYPD said.

A woman was seen in the video telling the officers not to hurt him. She was holding up her cell phone, filming the incident.

Read the full report by Bronx News 12. See the incident below: