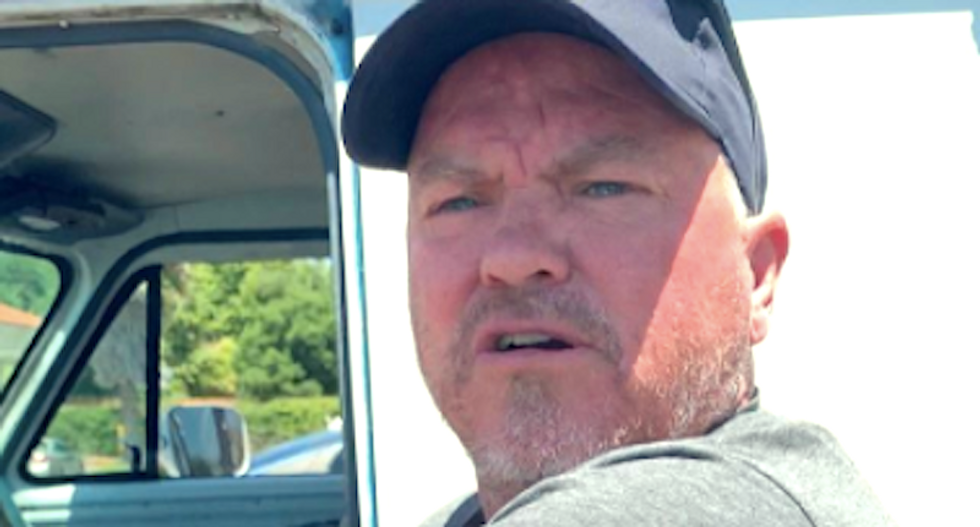 A California store manager recorded video of a customer hurling racist abuse after he was asked to wear a mask.

Harold Brown, who manages a store at an Atascadero shopping center, asked the customer to put on a mask to prevent the spread of coronavirus, and the man went on a lengthy racist rant, reported The Tribune.

“I’m not surprised by it,” Brown told the newspaper. “I’m honestly not even affected by it anymore, but, especially in the time that we’re in right now, it’s just shocking to me that people still go out of their way to implicate themselves when the nation is falling apart for that very reason.”

The video begins with Brown confronting the man outside the store as he gets into a van marked Pro-Cleaners Chimney and Carpet Cleaning.

"This guy just called me a n*gger," Brown says.

The man gets out of the van and yells, "so what?" and complains that he'd tried to make a return for cash three times at the store, and Brown asks why that justified the racist abuse.

"Is that why I'm a n*gger?" Brown says, as the man stalks around the parking lot shouting.

Brown then records the business name and phone number from the van, as the man adopts an exaggerated Southern accent and starts calling him "boy."

"Fetch me some water," the man screams, before climbing back into his van.

Brown said the man was apparently frustrated because he was unable to return an item for cash, because the store didn't have enough money on hand because the coronavirus pandemic has cut into cash sales, and then became angry when he was asked to comply with the state's mask mandate.

“He had come in to the store and was told to put on a mask and that just triggered him, and it just went downhill from there,” Brown said. “He immediately started being aggressive and cursing, and as he realized he wasn’t going to get his way, that’s when the racial slurs started coming.”

Brown decided to document the encounter after the racist abuse began, and he posted the video on social media afterward -- which then resulted in a flood of one-star reviews on Pro-Clean’s Yelp page.

The man returned and demanded the video be taken down, and Brown said he again called him the N-word and refused to apologize for his actions.

Unseating U.S. Rep. Lauren Boebert, a Republican from Silt who represents Colorado’s 3rd Congressional District, is a strong motivator for three Democratic primary candidates who spoke at a candidate forum in Grand Junction on Wednesday.

Boebert will first have to beat her primary challenger, Don Coram, a Republican state senator and former state representative from Montrose.