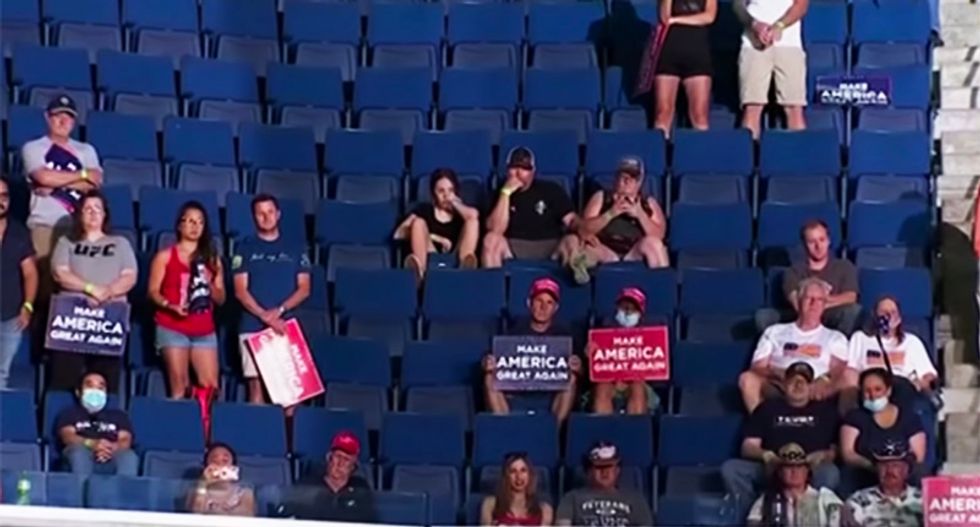 In an examination of Vice President Mike Pence's sudden change of heart about encouraging Americans to start wearing masks to protect themselves during the suddenly resurgent coronavirus pandemic, Politico reports that a White House official admitted Donald Trump's campaign is crossing its fingers that Oklahoma not suffer a huge COVID-19 infection spike following the president's Tulsa rally over ten days ago.

In the case of Pence, Politico’s report states that the vice president, with a possible eye on his own future as the COVID-19 health crisis drags down Trump's re-election numbers, has become increasingly worried about exploding infection rates from his perch as the head of the White House task force overseeing government efforts.

"The striking shift in the vice president’s tone — from zealously defending Trump’s push to reopen the U.S. economy to complimenting governors on Monday for halting their states’ reopenings — underscores Pence’s thorny position as he works to balance his and Trump’s political futures, which largely rely on convincing voters an economic rebound is on the horizon, with ensuring an appropriate response to an unwieldy new phase in the coronavirus pandemic," the report states.

Politico goes on to report that there is still a battle within the administration over how much information to share with the public, with some White House aides saying the focus should be on getting the economy back on its feet to help the president's re-election prospects.

But, as the report notes, getting people out of their homes could have a cost which is why the president's 2020 campaign is watching Oklahoma after the president's sparsely-attended rally in Tulsa two Saturdays ago.

"One senior administration official said the Trump campaign has been nervously monitoring data out of Oklahoma to determine whether the president’s June 20th rally, which the local fire department estimated 6,200 people attended, leads to apparent surge in surrounding counties over the next two weeks," the report states.

According to one official, “There is definitely an acknowledgment that a surge is happening,” across the country.

Of note, and of great concern to the White House, Oklahoma is experiencing its largest spike with 585 COVID-19 cases, beating a previous high of 450.

On Wednesday, the Lincoln Journal-Star reported that Chris Baker, a right-wing talk radio host for KFAB in Nebraska, posted a racist image in response to the murder and manslaughter conviction of former Minneapolis cop Derek Chauvin for the death of George Floyd.

"The tweet was posted within about an hour of the Derek Chauvin verdict and was headlined: Guilty!" reported Nancy Gaardner. "Beneath the headline was a GIF (file image) of four dancing older Black native men in loincloths, with body paint and possibly spears." According to the article, KFAB's parent company iHeartMedia is investigating to incident.