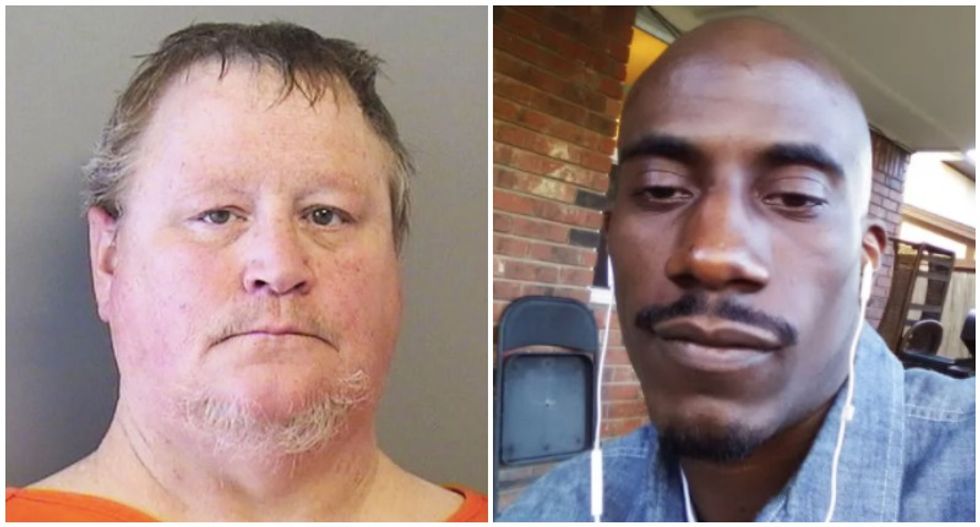 A Trump-loving white security guard with a racist past shot and killed an unarmed Black man during an unprovoked hotel parking lot attack.

Former Tulsa detention officer Christopher Straight has been charged with first-degree manslaughter after he provoked and then fatally shot Carlos Carson earlier this month, and newly released surveillance video shows the 36-year-old Black man had his back turned when the attack began, reported The Guardian.

Carson had been a guest at the hotel who was asked to leave earlier in the morning of June 6, after he became upset that his car was vandalized while staying there.

He returned to the property a few minutes later when the 53-year-old Straight, who was working as a security guard, got out of his pickup and sprayed Carson with pepper spray while his back was turned.

Straight later admitted that Carson had not made an aggressive move toward him, but told officers he used chemical irritant to "deter" the Black man from becoming aggressive and planned to detain him for trespassing until police arrived.

Security footage shows Carson walking away from Straight's truck when the security guard sprayed him.

Carson then confronted Straight and the two men struggled as Carson tried to pull him from his vehicle.

A few seconds later, Straight shot Carson in the head, killing him.

Straight was arrested afterward and released on $50,000 bond.

Relatives said Carson had been struggling with mental health issues when he checked into the hotel for a few days.

“We’re not trying to paint him out to be an angel or saint,” said his brother Ananias Carson, a Tulsa police officer. “But no one needs to be assaulted, then shot, because they defended themselves.”

“My brother didn't deserve what he got, especially in the manner that it happened," he added, saying his brother had PTSD after a prison term. "He didn’t deserve that."

The Guardian reviewed documents that show Straight was previously accused of racist behavior by a black colleague while working as a guard at city's jail, and inmates accused him of negligence.

The Tulsa county Sheriff’s Office, which operates the jail, declined to answer questions about Straight's resignation from the department in 2018, after 16 years, on the same day he was told he would be demoted.

The day before killing Carson, Straight shared a Facebook meme with the words: “How about all lives matter. Not black lives, not white lives. Get over yourself no one’s life is more important than the next. Put your race card away and grow up.”

A week earlier, on May 31, he shared another meme that read: “If you are anti-police: I’m blue family, unfriend me,” along with the hashtag #Bluelivesmatter.

Three days prior to that, he shared an image that stated, “I support Trump and I will not apologize for it," and Facebook photos show Straight wearing a red “Make America Great Again” cap.

President Donald Trump will visit Tulsa on Saturday for his first campaign rally since the coronavirus pandemic, and then nationwide protests over racism and police brutality.