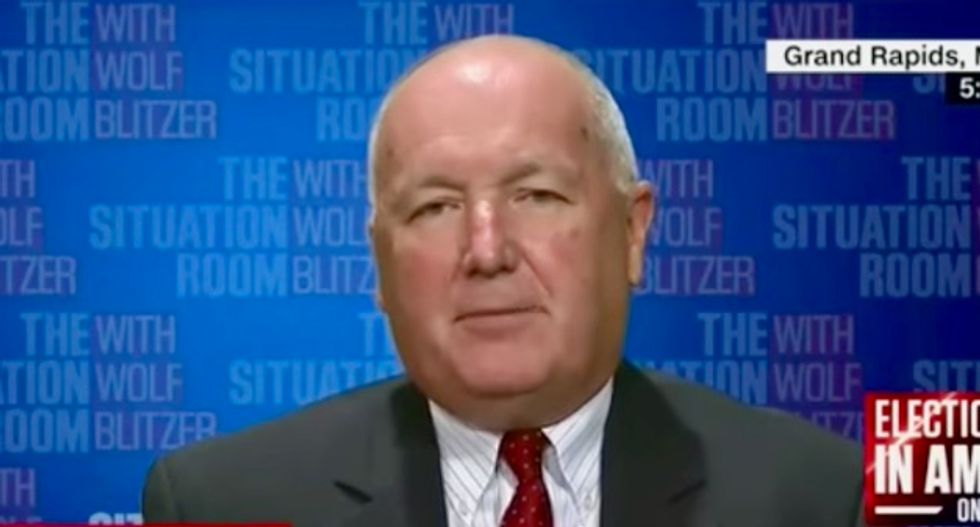 U.S. Ambassador to the Netherlands Pete Hoekstra on Thursday visited a cemetery and called the experience a "terrible reminder of the cost of going to war and why we must always work towards peace." Hoekstra is a former GOP Congressman who served as the Chair of the House Intelligence Committee.

The cemetery is the burial place of dead German soldiers from both WWI and WWII. Thursday was a Jewish day of mourning, Tisha B'Av, known as "the saddest day on the Jewish calendar."

The nonprofit news site Michigan Advance notes that "Neo-Nazis have been known to visit to honor Nazis buried" at at the Ysselsteyn German war cemetery. It is the largest World War II German cemetery.

Why a United States Ambassador is mourning the deaths of German soldiers is incomprehensible to many, who expressed outrage on social media.

Historian Ruth Ben-Ghiat, an expert on authoritarians and fascism:

I never imagined I would see this: A US ambassador paying tribute to Nazi German fighters & occupiers. Including S… https://t.co/HT15eDrWkI
— Norm Eisen (@Norm Eisen) 1596131920.0

Trump stabs Angela Merkel in the back, then his puppet ambassador to the Netherlands sends a loud signal of support… https://t.co/7eMcgiCHo6
— Charles Johnson (@Charles Johnson) 1596162066.0

Is there anything more quintessentially "Trump Era" than the American Ambassador to the Netherlands choosing the gr… https://t.co/UUQeqrTkoD
— Mrs. Betty Bowers (@Mrs. Betty Bowers) 1596133386.0

@usambnl “Walking in a nazi graveyard reminded me of just how precious life is” is frankly an unsurprising take from a republican in 2020
— TwoWheelsDC (@TwoWheelsDC) 1596117887.0