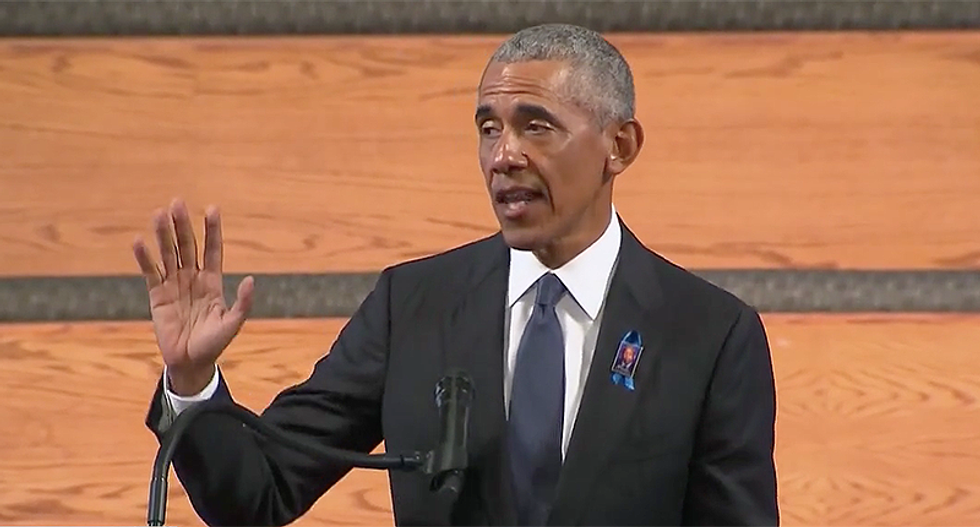 Former President Barack Obama celebrated the life and activism of Rep. John Lewis (D-GA) on Thursday, taking a shot at Republicans and attacks on American democracy.

"He knew that progress was fragile," Obama said. "That we have to be vigilant against the darker currents of this nation's history and of our own history with the whirlpools of violence and hatred and despair that can always rise again.

"Bull Connor may be gone but today we witness with our own eyes police officers kneeling on the necks of black Americans," Obama continued. "George Wallace may be gone, but we can witness our federal government sending agents to use teargas and batons against peaceful demonstrators."

The audience broke out into applause.

"We may no longer have to guess the number of jelly beans in a jar in order to cast a ballot, but even as we sit here there are those in power who are doing their darndest to discourage people from voting by closing polling locations and targeting minorities and students with restricted I.D. laws and attacking our voting rights with surgical precision even undermining the postal service in the run-up to an election that's going to be dependent on mail-in ballots so people don't get sick," he said.

He noted that he knew it was a celebration of Lewis' life, but that Lewis devoted his whole life fighting the attacks on democracy that Americans are suffering from today.

He went on saying that as long as we have breath in our bodies, we should follow his cause. He celebrated the Voting Rights Act and noted the many states that have purposefully tried to disenfranchise voters, particularly voters of color.

“John spent his life defending the attacks on democracy we witness circulating right now. If we want our children to grow up in a democracy ... to be a part of tolerant inclusive America, we‘re going to have to be more like John,” he said.

"That's where real courage comes from. Not from turning on each other, but by turning towards one another. Not by sowing hatred and division, but by spreading love and truth. Not by avoiding our responsibilities ... but by embracing those responsibilities with joy," he said. “Someday, when we do finish that long journey towards freedom, when we do form a more perfect union...John Lewis will be a Founding Father of that fuller, fairer, better America."