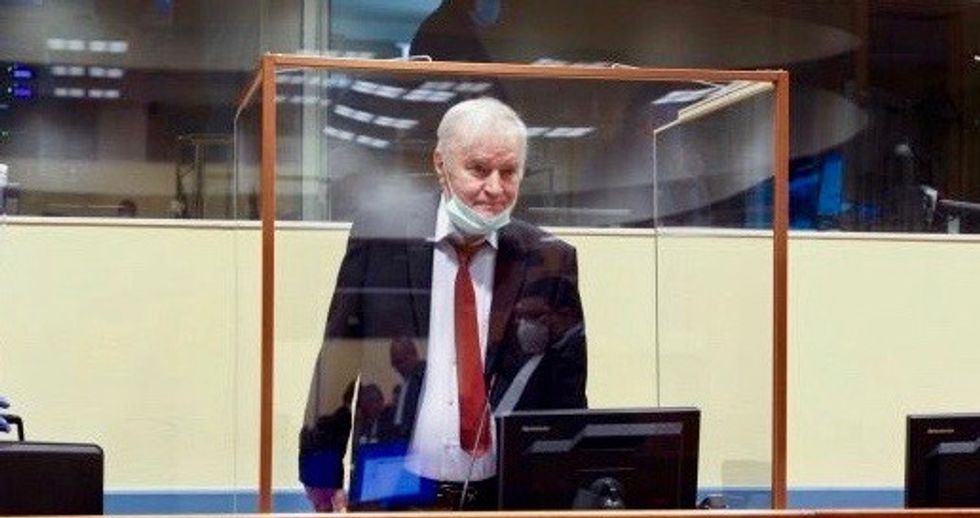 Former Bosnian Serb military chief Ratko Mladic was in court at The Hague on Tuesday to appeal his 2017 genocide conviction for atrocities his forces committed during the Bosnian war, including the murders of 8,000 Muslim men and boys at Srebrenica. Lawyers for Mladic argued that he was not fit to face trial.

Lawyers for Bosnian Serb military chief Ratko Mladic told a UN court Tuesday he was at risk of a "miscarriage of justice" because he was not mentally fit to take part in an appeal hearing against his genocide conviction.

Dubbed the "Butcher of Bosnia", the 78-year-old Mladic has challenged his 2017 conviction and life sentence for genocide, crimes against humanity and war crimes in the civil war in the former Yugoslavia, including the 1995 Srebrenica massacre.

But Mladic's lawyers said they were taking part under protest in the two-day hearing in The Hague, after judges earlier this week rejected a bid to postpone it pending a fresh medical assessment.

A frail-looking Mladic appeared in court wearing a mask because of coronavirus regulations, which he later removed. Wearing a suit with his red tie askew, he initially complained that he could not follow the hearing through headphones.

"This hearing today is inappropriate and threatens ... a miscarriage of justice, such that I cannot abide to be a silent participant in this questionable proceeding," defence lawyer Dragan Ivetic told the court in opening remarks.

The hearing has already been delayed several times since March after Mladic needed an operation to remove a benign polyp on his colon, and then because of the pandemic.

'Questions about his memory'

Mladic was captured in 2011 after years on the run and sentenced to life behind bars three years ago for his role in the 1992-95 war in Bosnia.

This included genocide committed by his forces in the small eastern Bosnian town of Srebrenica, Europe's worst bloodshed since World War II, where some 8,000 Muslim men and boys were slaughtered.

About 100,000 people were killed and 2.2 million others displaced in the Bosnian war, which erupted as communal rivalries tore Yugoslavia apart after the fall of communism.

Ivetic said the original judgment was "replete with errors", including linking Mladic to crimes committed in 1991 before he was in the chain of command.

The trial judges erred by admitting some actions allegedly carried out by Mladic's subordinates, said Peta-Louise Baggott, another defence lawyer.

The case is being heard at the UN's International Residual Mechanism for Criminal Tribunals in The Hague, which deals with cases left over from now defunct tribunals for the former Yugoslavia and Rwanda.

Mladic will himself be allowed to speak for 10 minutes on Wednesday. He had to be dragged out of the court in 2017 after an outburst in which he accused the judges of lying.

Mladic's son Darko said the former military chief "hasn't been able to prepare" because of his health and because lawyers had been unable to visit him.

"He doesn't have the energy needed for work of this kind and there are questions about how well his memory is working," Darko Mladic told AFP.

Mladic was the military face of a trio led on the political side by ex-Yugoslav president Slobodan Milosevic and former Bosnian Serb leader Radovan Karadzic.

Haunting footage showed Mladic assuring people in Srebrenica they would be safe as his troops brushed aside Dutch UN peacekeepers, even as those troops were gearing up for the massacre.

Milosevic died of a heart attack in his cell in The Hague in 2006 before his trial had finished, while Karadzic is serving a life sentence for genocide in Srebrenica and other atrocities.

The "Mothers of Srebrenica", a group of women related to victims of the massacre who have for years protested outside court, will not attend the hearing for the first time, due to the pandemic.

"We hope Mladic will be found guilty for genocide in other towns as well, not just those in Srebrenica," Munira Subasic, president of the main Mothers of Srebrenica association, told AFP.