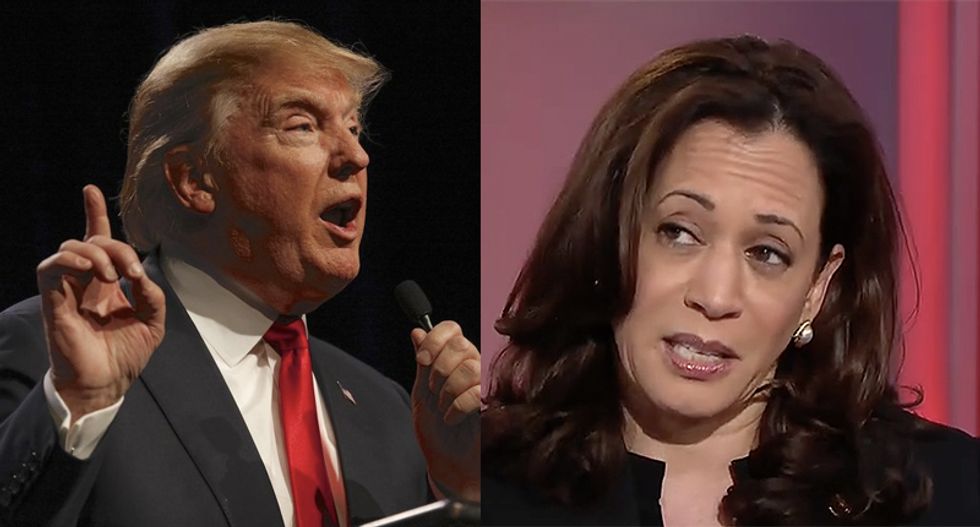 President Donald Trump remains furious over Sen. Kamala Harris (D-CA) calling for his prosecution after leaving office, according to sources who've spoken to him.

The president rarely picked on Harris during her run for the Democratic presidential primary, but he singled out her support for having him criminally prosecuted once he leaves the White House, according to two individuals who spoke to The Daily Beast.

“I’ve seen prosecution of cases based on much less evidence,” Harris told NPR last year, after the Mueller report was issued.

One of the sources told The Daily Beast the president recently ridiculed Harris for her calls to prosecute him, saying she wanted to play "tough," but he also insists the former California attorney general and prosecutor was just "bluffing."

Trump also complained that Democrats wanted to launch another "witch hunt" against him, that source said, and mocked her suggestion that he should be booted from Twitter.

“Criminal prosecution of President Trump? [Kamala] must be smoking something,” said John Dowd, one of Trump's attorneys during special counsel Robert Mueller's investigation. “The American people are very smart. They figure these things out pretty easily. There’s not going to be any prosecution of the president after he leaves office.”

A third source who's spoke to Trump about Harris said the president had jokingly accused the senator of "ripping him off" by “swapping in ‘Lock Him Up’ in place of ‘Lock Her Up,’” as he'd done to Hillary Clinton.

Trump's current and former attorneys say Harris calling for his post-presidency prosecution was both laughable and unforgivable.

“Harris’ record [as a longtime prosecutor] is that she is a malicious prosecutor," said Jenna Ellis, a senior legal adviser to Trump and his campaign. "Statements like that are fully in line with her terrible record of using her position for political prosecutions. Democrats don’t care about law and order, they only care about abusing their own political power.”

Ellis also expressed doubts about Harris' legal eligibility to run, as Trump and other conservatives hint that her parents' status as immigrants rule her out as vice president.

"She was a bully," said Trump's personal attorney Rudy Giuliani, who has doggedly pursued overseas investigations of Joe Biden and his son. "She mounted up convictions against little people for little crimes and ran away from all tough and political cases.”