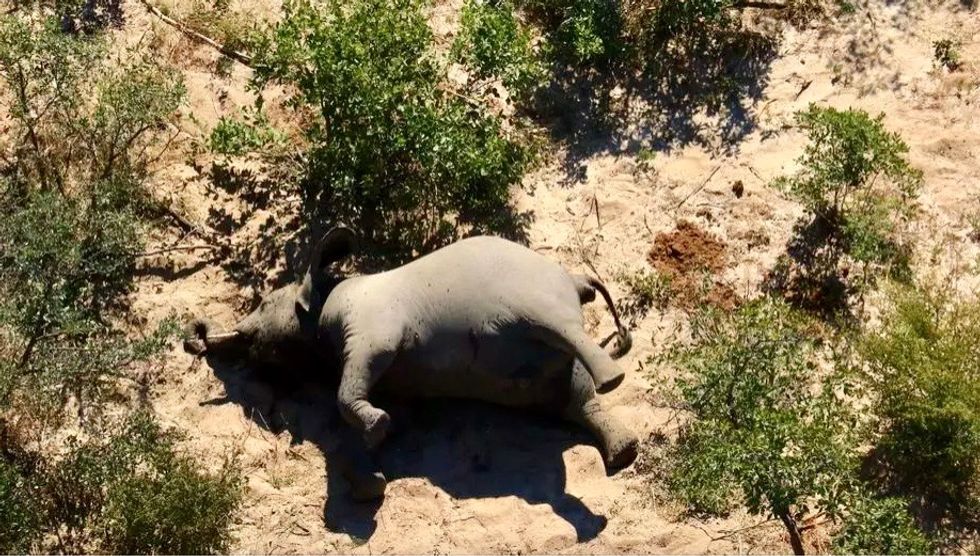 The latest elephant deaths in Zimbabwe come after scientists found that hundreds of specimens had succumbed to bacteria in Botswana's Okavango Delta. © AFP, National Park Rescue

"A total of 34 carcasses have been found... but some others have not been located," Zimbabwe Parks and Wildlife Management Authority director Fulton Upenyu Mangwanya told parliament on Monday.

The animals died between August 24 and September 23 this year in and around the wildlife-rich forests between the famous northwestern Hwange National Park and the town of Victoria Falls.

"They were found lying on their bellies" suggesting they had an "extremely sudden death", Mangwanya said.

Tests conducted in Zimbabwe so far point to a disease called haemorrhagic septicaemia, which is caused by bacterial infection, he said.

Rangers have ruled out cyanide poisoning or poaching because the animals were found with their tusks intact.

Mangwanya said wild animals are more susceptible to disease during the country's dry and hot season, which is roughly from August to November.

Samples have been sent to a laboratory in Britain and others will be dispatched to South Africa and the United States for further tests and analysis.

In recent years Zimbabwe has suffered through successive droughts made more severe by global warming, leaving animals with less water and vegetation.

Neighboring Botswana, home to the world's largest elephant population of around 130,000, lost around 330 elephants early this year from cyanobacteria poisoning.

Cyanobacteria are microscopic organisms common in water and sometimes found in soil. Not all produce toxins but scientists say toxic ones are occurring more frequently as climate change drives up global temperatures.

Southern Africa's temperatures are rising at twice the global average, according to the Intergovernmental Panel on Climate Change.

"It amounts to having the right conditions, in the right time, in the right place and these species will proliferate," Patricia Glibert, a professor at the University of Maryland Center for Environmental Science, who has studied cyanobacteria, told Reuters.

"These conditions are coming together more often, in more places, so we are seeing more of these toxic blooms around the world."