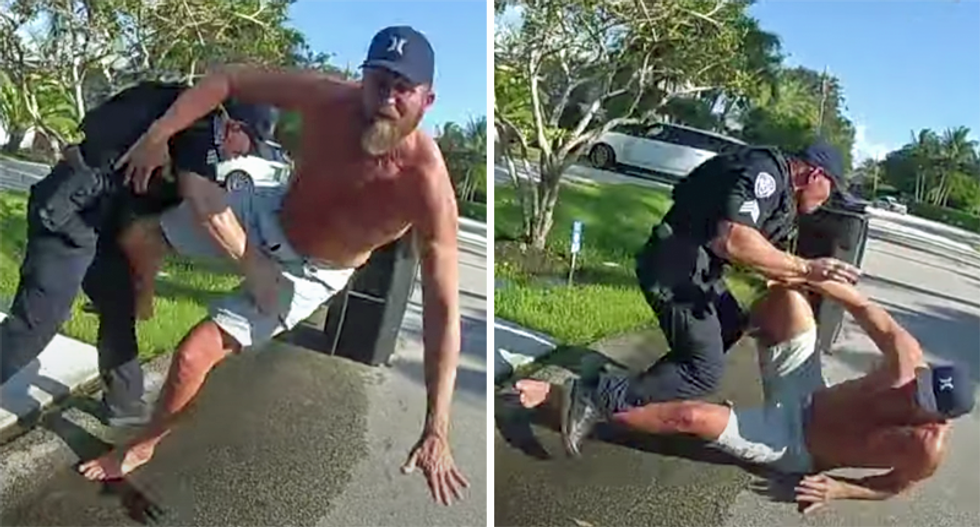 Fort Lauderdale Police on Monday released body camera footage showing the arrest of Brad Parscale, the former campaign manager for Donald Trump. Parscale was arrested outside his home on Sunday afternoon after threatening to harm himself.

The video shows officers tackling Parscale after he comes out of his house to speak to police. "I didn't do anything," he can be heard saying as police restrain him.

Parscale’s wife called police to report that her husband was armed, had barricaded himself in the home, and was threatening to kill himself.

"The confrontation with officers started after an argument between the couple. Candice Parscale says her husband chambered a round into a pistol during a heated exchange between the two," the Sun-Sentinel reported.

"It’s unclear what they were arguing about, but she says she fled the house in fear and ran to a neighbor’s residence, from which she called the cops."

Parscale was transported to Broward Health Medical Center and is being detained for psychiatric evaluation under the state’s Baker Act. Police have not charged him with a crime.

Candice Parscale told police that her husband had post-traumatic stress disorder and had recently become violent. She showed them bruises on her arms from an argument two days prior, according to the Miami Herald.

"While speaking with Candace Parscale [sic] I noticed several large sized contusions on both of her arms, her cheek and forehead," wrote Detective Steven Smith in his report. "When I asked how she received the bruising, Candace Parscale stated Brad Parscale hits her."

Parscale was demoted to senior campaign adviser in July. Trump tapped Bill Stepien to be his replacement as campaign manager.

"Brad Parscale is a member of our family and we all love him," Tim Murtaugh, a spokesman for the Trump campaign, said in a statement. "We are ready to support him and his family in any way possible. The disgusting, personal attacks from Democrats and disgruntled RINOs have gone too far, and they should be ashamed of themselves for what they’ve done to this man and his family."