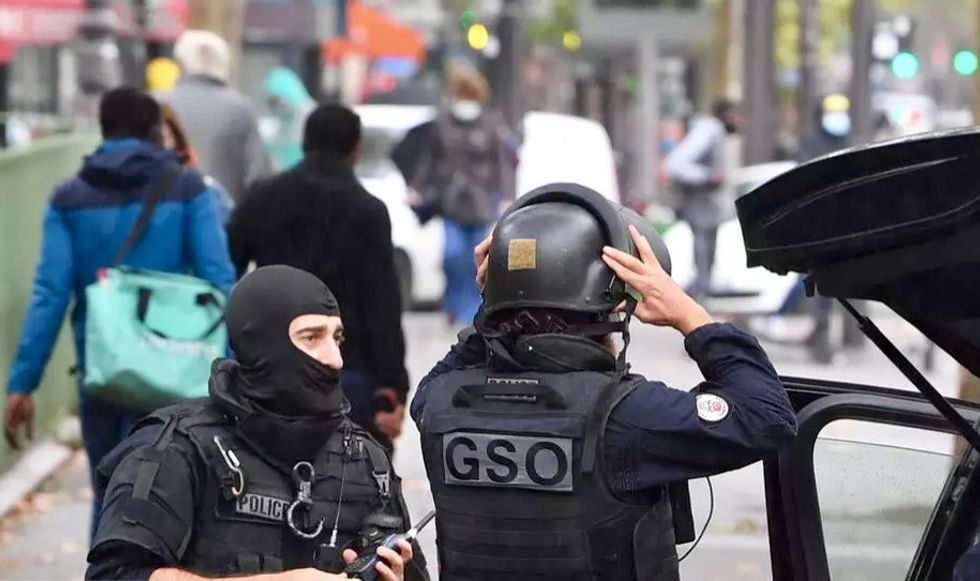 French prosecutors have opened a terrorism investigation after at least two people were wounded in a knife attack in Paris on Friday near the former offices of the satirical magazine Charlie Hebdo. Two suspects have been arrested.

Two victims were seriously injured in the attack, the Paris police department said.

France’s counterterrorism prosecutor said authorities suspect a terrorist motive because of the place and timing of the stabbings: in front of the building where Charlie Hebdo was based until the Islamic extremist attack on its cartoonists and at a time when suspects in the 2015 attack are on trial across town.

Prosecutor Jean-François Ricard said that the chief suspect in Friday’s stabbings was arrested, along with another person. Ricard said the assailant did not know the people who were stabbed, two workers in a documentary production company who had stepped outside for a cigarette break.

The suspects’ identities have not been released, and it is unclear exactly what prompted the attack. An investigation was opened into “attempted murder in relation with a terrorist enterprise”, according to an official at the terrorism prosecutor’s office.

“All the team at Charlie offers support and solidarity to its former neighbours and colleagues at PLTVfilms and to the people hit by this odious attack,” Charlie Hebdo tweeted.

Later Friday, French Prime Minister Jean Castex arrived at the scene after cutting short a visit to northern Paris. He underscored the “symbolic site” of the attack, “at the very moment where the trial into the atrocious acts against Charlie Hebdo is under way”. He promised the government’s “unfailing attachment to freedom of the press, and its determination to fight terrorism”.

Castex also added that the injuries the two victims had sustained in the attack were “not life-threatening”. Charlie Hebdo's current address is kept secret for security reasons.

The two people confirmed injured worked for documentary film company Premières Lignes, according to founder Paul Moreira. He told BFM television that the attacker fled into the subway, and the company’s staff members were evacuated.

Moreira said a man in the street “attacked two people who were in front of the building, didn’t enter the building, and who attacked them with an axe and who left”. He said the company had not received any threats.

Police cordoned off the area, including the former Charlie Hebdo offices, after a suspect package was noticed nearby, but the package was found to be harmless and no explosives were found, according a police official.

No explosives found in package found at Paris attack scene

Reporting from the scene, FRANCE 24 journalist Christophe Dansette said one of the suspects was "covered in blood" after being apprehended by police near the Place de la Bastille in eastern Paris.

Police initially announced that four people had been wounded in the attack, but later revised that number down to two. Police could not explain the discrepancies.

“Four people have been wounded and it seems that they are in a serious condition,” they said at that time.

Friday´s stabbing came as a trial was underway in the capital for alleged accomplices of the instigators of the January 2015 attack on Charlie Hebdo. Twelve people, including some of France’s most celebrated cartoonists, were killed in the attack by brothers Said and Chérif Kouachi, who claimed to be part of a branch of al Qaeda.

A female police officer was killed a day later, followed the next day by the killing of four men in a hostage-taking at a Jewish supermarket by gunman Amedy Coulibaly.

The 14 defendants stand accused of having aided and abetted the perpetrators of the 2015 attacks, who were themselves killed in the wake of the massacres.

The magazine, defiant as ever, had marked the start of the trial by republishing hugely controversial cartoons of the Prophet Mohammed that had angered Muslims around the world.

Al Qaeda then threatened Charlie Hebdo with a repeat of the 2015 massacre of its staff.

The trial in Paris had resumed Friday after a suspect’s coronavirus test came back negative.

The hearing for the 14 suspects, which opened on September 2, was postponed Thursday after Nezar Mickael Pastor Alwatik fell ill in the stand.

His lawyer, Marie Dose, said her client had suffered from “a lot of fever, coughing, vomiting and headaches”.

He was back in the box on Friday, after the presiding judge informed defence and prosecution lawyers by SMS late Thursday that the test results allowed for the trial to go ahead.