'Trump blew the biggest layup in the history of debate': Even Fox News can't defend the president 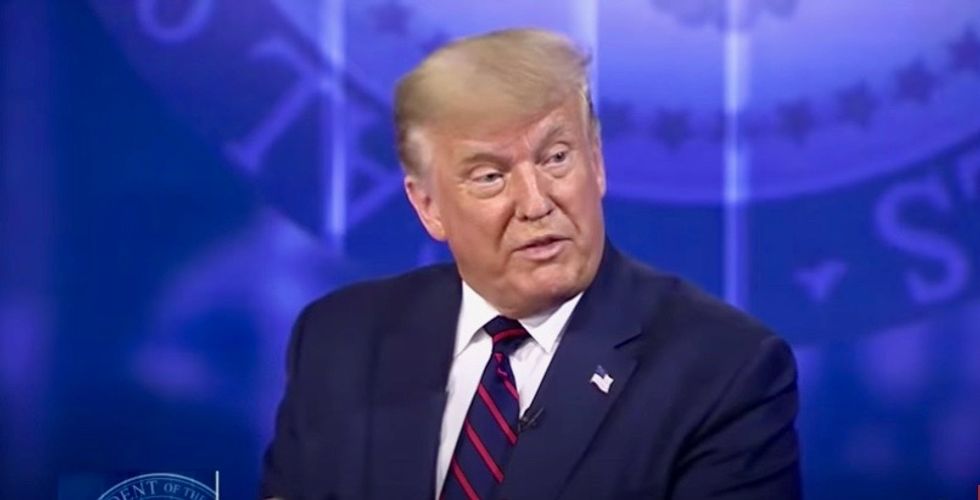 Donald Trump (Screen Grab)
President Donald Trump was widely denounced by nonpartisan journalists and undecided voters after he derailed the first presidential debate with a torrent of heckles and lies.

Trump steamrolled over moderator Chris Wallace of Fox News and seldom allowed Democratic nominee to finish a sentence uninterrupted, though he did little to bolster his own case for a second term. Trump repeatedly and falsely accused Biden of supporting Medicare-for-All, the Green New Deal and defunding the police — which Biden spent an entire primary campaigning against — and attacked his son Hunter as the vice president paid tribute to his late son Beau.

A CNN poll found Biden as the winner of the debate by a margin of 60-28, though New York Times poll analyst Nate Cohn noted that "there was no winner, certainly not the United States."

The most stunning moment of the night came toward the end of the calamitous 90-minute affair when the president refused to denounce white supremacists and called for his supporters to "watch" polling places, which critics called "voter intimidation."

"Are you willing, tonight, to condemn white supremacists and militia groups?" Wallace asked. "And to say that they need to stand down and not add to the violence in a number of these cities, as we saw in Kenosha and as we've seen in Portland?"

Trump said he was "willing to do that" before arguing that "almost everything I see is from the left-wing — not from the right-wing."

"Proud Boys: Stand back, and stand by," Trump said. "But I'll tell you what, somebody's got to do something about antifa and the left, because this is not a right-wing problem. This is a left-wing problem."

Wallace also asked Trump to urge his supporters not to engage in civil unrest over the results of the election. Trump instead called on his supporters to "watch" polling places, adding that "bad things happen in Philadelphia."

The Proud Boys, which was labeled a hate group by the Southern Poverty Law Center and has been engaged in numerous violent demonstrations, celebrated Trump's comments.

Trump also claimed to have the endorsement of the sheriff of Portland, where the Proud Boys have been especially active.

"As the Multnomah County Sheriff, I have never supported Donald Trump and will never support him," Sheriff Mike Reese said after the debate.

Democratic vice presidential nominee Kamala Harris said Trump's comment was "not a dog whistle" to white supremacists" — it was a "bullhorn."

Former Sen. Rick Santorum, R-Pa., now CNN's resident Trump defender, claimed after the debate that Trump had refused to condemn white supremacists, because he does not like to criticize his supporters.

"He was asking the president to do something he knows the president doesn't like to do," Santorum said of Wallace. "Which is say something bad about people who support him . . . talking about the white supremacists, number one."

The comment was so bad that even Donald Trump Jr. rushed to do damage control, arguing that his father misspoke.

"I don't know if that was a misspeak, but he was talking about having them stand down," he told CBS News. "He's more than happy to condemn that."

Even Trump-friendly Fox News hosts were stunned by the president's refusal to condemn white supremacists.

"Donald Trump blew the biggest layup in the history of debates by not condemning white supremacists," "Fox & Friends" co-host Brian Kilmeade said. "I don't know if he didn't hear it, but he's got to clarify that right away. That's like, 'Are you against evil?'"

Co-host Steve Doocy argued that no candidate won the debate, but Kilmeade noted that "we were the big losers last night, meaning the American people."

"That was a sh*t show," CNN chief political correspondent Dana Bash said. CNN host Jake Tapper called the debate "a hot mess, inside a dumpster fire, inside a train wreck." MSNBC host Rachel Maddow described Trump's performance as a "monstrous cavalcade of increasingly wild and obscene lies." NBC News anchor Chuck Todd said it was a "train wreck of the making of one person . . . President Trump did this."

The debate did not play well with undecided voters, either. Voters in a virtual focus group hosted by Republican pollster Frank Luntz said relatively positive things about Biden's performance, but described Trump as "unhinged," a "crackhead," and a "bully."

The event also became a global embarrassment, with journalists at international news outlets panning the night as "the most toxic debate I've ever seen," "one of the worst TV viewing experiences in my life" and a "clusterf*ck."

CNN host Wolf Blitzer said the debate was an "embarrassment for the United States."