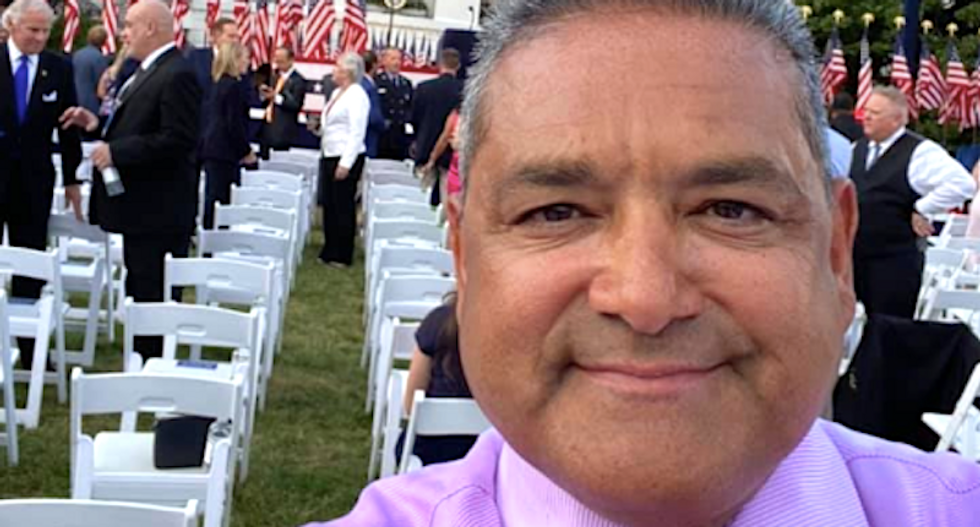 One of President Donald Trump's "beautiful boaters" has been charged with threatening his neighbor in a political dispute.

Pro-Trump boat parade organizer Carlos Enrique Gavidia was charged with one felony count of written threats to kill or do bodily harm after sending a series of profane and harassing texts to his neighbor over an apparent dispute over face masks, reported WPEC-TV.

The 53-year-old Gavidia, whose Instagram page shows him meeting the president and his eldest son Donald Trump Jr., confronted neighbor Paul Edenbaum and his wife Aug. 12 in an outdoor seating area last month at the Admiral's Cove Marina Cafe in Jupiter.

"F*ck you, you f*cking little Jew!" Gavidia said, according to Edenbaum, and then hurled a vile misogynist slur at his neighbor's wife.

Gavidia left the café but minutes later sent a misspelled and threatening text to Edenbaum, according to the police report.

"Your such a p*ssy," Gavida texted his neighbor. "You f*cked with the wrong guy I'm coming for you you'll see you will see you little f*cking piece of sh*t I've got nothing to lose but you have plenty like your life, you have no idea who I am I want to get your little f*cking friends flicking me off calling me names while we're at the f*cking Marina Cafe you f*cked with the wrong guy. And I don't play like you p*ssies I play for keeps your f*cking done."

Edenbaum told police he had no idea what had set Gavidia off, but said his Trump-supporting neighbor had sworn at him via text after an encounter the day before at the café.

Gavidia had approached him without a mask on, which Edenbaum said had made him uncomfortable because he was eating lunch with his father.

"Dude are we no longer friends because I support the president???" Gavidia texted afterward. "I come up say hello and you act like a d*ck. ... You classless piece of sh*t."

That flurry of texts was punctuated with a middle-finger emoji, Edenbam said.

Edenbaum told police the texts made him fearful for his life, and Gavidia admitted to police that he had three verbal altercations with his neighbor on Aug. 11, 12 and 25, and he also admitted to sending the profane texts.

Gavidia's lawyer, Stuart Kaplan, told the TV station that Edenbaum had become angry over his client's outspoken support for the president -- which included his attendance last week at Trump's acceptance speech at the Republican National Convention on the White House lawn.

Kaplan said his client had been harassed and taunted by his neighbors to the point where he moved away from Admiral's Cove.

President Trump is coming out soon!!