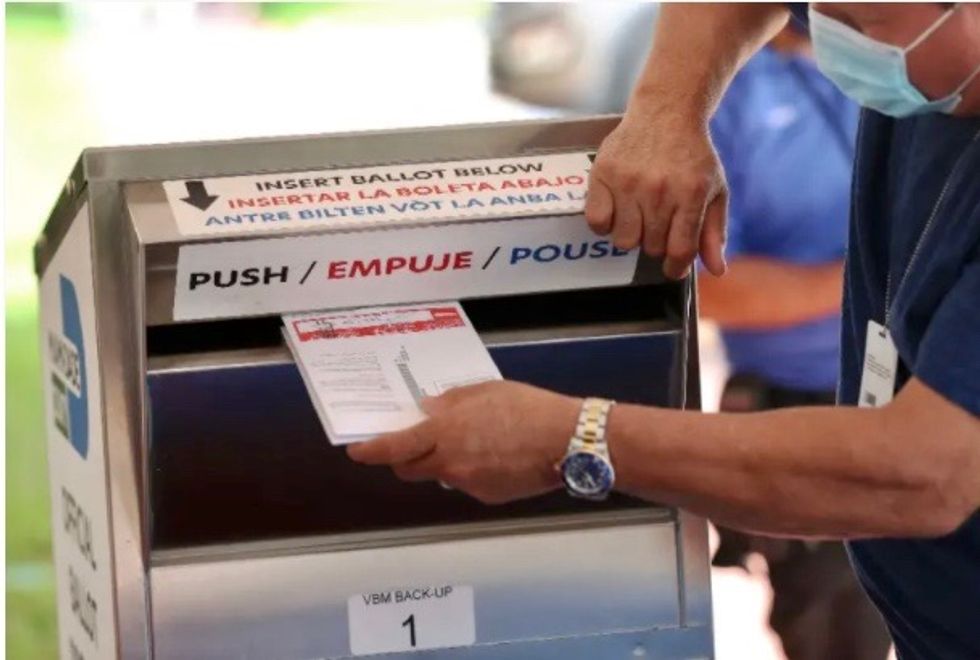 A poll worker places vote-by-mail ballots into a ballot box at the Miami-Dade Election Department headquarters on October 14, 2020 (AFP)

A federal appeals court on Thursday ordered Minnesota to "segregate" all absentee ballots that are postmarked by Election Day, Nov. 3, but arrive in the mail over the subsequent days. The decision was a stark warning the courts may end up disqualifying these votes in post-election litigation.

"The Secretary [of State]'s instructions to count mail-in ballots received up to seven days after Election Day stand in direct contradiction to Minnesota election law governing presidential elections… [and] are likely to be declared invalid under the Electors Clause of Article II of the United States Constitution," the Eighth Circuit said in a 2-1 split decision that found Minnesota Secretary of State Steve Simon lacked authority to extend the ballot-return deadline.

"The Secretary and his respective agents… are ordered to identify, segregate, and otherwise maintain and preserve all absentee ballots," the order continued, "in a manner that would allow for their respective votes [for president and vice-president]… to be removed from vote totals in the event a final order is entered by a court."

The appeals court ruling is the latest decision by a federal court that has thrown into question a subclass of absentee ballots—those postmarked by Election Day but arriving in the mail days later — that GOP officials have sought to disqualify via an ultraconservative interpretation of election law. Republicans, in Minnesota and in other 2020 swing states, have contended that only a state's legislature has the authority to adopt rules governing how elections with federal candidates are to be run.

On Wednesday, the U.S. Supreme Court issued two decisions where non-legislative actors had extended their state deadline for accepting absentee ballots. In Pennsylvania, the state's supreme court extended the deadline by three days to November 6. In North Carolina, the state's election board extended it to November 12. In these states, the Supreme Court let the ballot-return deadlines stand, saying that it was too close to Election Day to alter it without confusing voters.

But statements by several conservative justices in those rulings said that post-Election Day litigation could likely disqualify the late-arriving ballots for the same reasons cited in the Minnesota ruling: that non-legislative actors (a state supreme court citing a state constitution and a state board of elections) had made decisions affecting the "time, place and manner" of federal elections without authority under the federal Constitution.

"Simply put, the Secretary [of State] has no power to override the Minnesota Legislature," the appellate court said. "In fact, a legislature's power in this area is such that it 'cannot be taken from them or modified' even through 'their state constitutions.'"

Late last week, the U.S. Supreme Court issued a similar ruling for Wisconsin, another swing state, when it decided not to overturn an appeals court ruling that concluded its absentee ballots had to be returned by Election Day because Wisconsin's legislature had not extended the ballot-return deadline.

In reaction to Wednesday's Supreme Court ruling, Pennsylvania told the high court that it would "segregate" the absentee ballots arriving after Tuesday and through its Friday deadline. While Pennsylvania officials have not said much about that decision, election law experts have said the move would shield 2.1 million absentee ballots that already have been returned from possible GOP challenges. In Pennsylvania, 3.1 million voters applied for absentee ballots.

The press office for the North Carolina State Board of Elections did not respond to an inquiry Thursday asking whether it might follow Pennsylvania's lead and also segregate the ballots arriving in the mail between November 3 and November 12.

Voting rights groups, including North Carolina's NAACP state chapter, discussed the Supreme Court ruling on Thursday to assess its legal options for defending properly postmarked ballots arriving after Nov. 3. As of October 29, 852,000 absentee ballots have been returned by North Carolinians. Across the state, 1.45 million voters have applied for the ballots.

In Minnesota, Secretary of State Steve Simon told the Star-Tribune newspaper before the ruling was issued, "If that [ballot return deadline] is reversed, it would be extraordinarily disruptive — not to mention disenfranchising." His office's website did not have a comment on the ruling.

Statewide, more than 1.7 million absentee ballots have been requested in Minnesota, the U.S. Elections Project reported. As of October 29, 1.19 million Minnesotans have voted early—a mix of in-person early voting and absentee ballots. The state combines these figures.

Stepping back, it appears the Republican Party and its allies have found a way that may disqualify potentially large volumes of late-arriving absentee ballots in four swing states: Minnesota, Wisconsin, Pennsylvania and North Carolina. The basis for that prospect is the contention that no authority other than a state legislature can regulate federal elections.