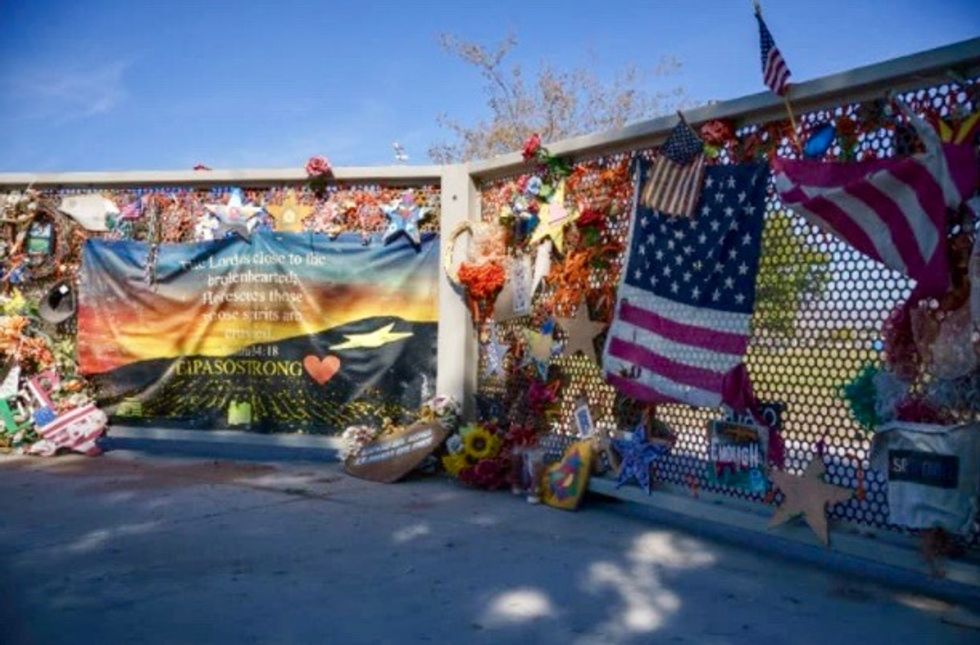 A memorial to victims of the 2019 shooting massacre in El Paso, where some voters say the violence could influence their choice of president (AFP)

In El Paso, Texas, large numbers of voters have been casting early ballots in the US election with many saying that a racist shooting spree last year is at the forefront of their minds.

A Walmart store in the town was the scene of a massacre on August 3, 2019 when 23 people were shot dead and many others injured by a man who said he was fighting back against a "Hispanic invasion" of Texas.

The shooter is believed to have driven nine hours from near Dallas to El Paso, which has a large majority Hispanic population and is on the Rio Grande river that marks the border with Mexico.

Many of the victims were Hispanic or Latino, and some locals remain convinced that President Donald Trump's long record of verbal insults against migrants played a role in fostering the assault.

"I think he's racist. I think he's very racist against Hispanics, said Leigh Smith, 60, as she lined up outside a polling station.

"When I see how he attacks the Hispanics, it just hurts me," said Smith, a Hispanic woman who no longer works due to disabilities.

Trump called Mexican migrants "rapists" and drug dealers during his 2016 election campaign and vowed to build a wall along the border.

In office, he has cracked down on migration, and been accused of imposing policies that separate migrant families at the border and cruelly mistreat children.

"It started with the depiction of our community as murderers and rapists and then it continued to a vilification of immigrants," said Sylvia Acosta, head of El Paso's Young Women's Christian Association (YWCA).

"Then children were being kept in cages where family separations were occurring... Then the shooting hit, and it became like that rhetoric fed into a human being coming to our community to kill Mexicans," said Acosta.

The attack shocked a city that had been rated as one of the safest in the country, and the aftermath could influence voters as Trump tries to win a second term against Joe Biden.

"A violent attack like this, against Latinos and Mexicans, damaged our sense of safety, security and definitely made us feel vulnerable," said Marisa Limon, head of the Hope Border Institute, an community organization which focuses on migration.

"Anecdotally, that's translating into people voting in such high numbers and participating and trying to just uplift some kind of voice.

Early voting numbers in El Paso County are far ahead of 2016, a trend seen nationwide as many people avoid casting ballots on election day itself, partly due to fears over the Covid-19 pandemic.

But Trump has tempered his anti-migrant attacks during the campaign and tried hard to woo the Hispanic and Latino vote that could be crucial to the election income.

And he attracts some strong support in El Paso, which has a Republican mayor.

"I am against socialism and that's the main purpose that I went to vote, and I am also against abortion," said Claudia Contreras Siller, a 32-year-old Republican who works in the health care sector.

"Democrats are brainwashed because they're watching a lot of really biased news telling them that the president is racist... but it's only lies."

Trump has denied his comments fuel racism and violence, and said the El Paso shooting had "nothing to do with" him, instead accusing Biden and the Democrats of seeking to make political gains from the massacre.

Loyal Trump supporter Elizabeth Lopez, 71, said she supported his speeches and understood his remarks on migrants.

"I don't take it as an insult. It was for the cartels," she said. "He didn't mean everyone in general."