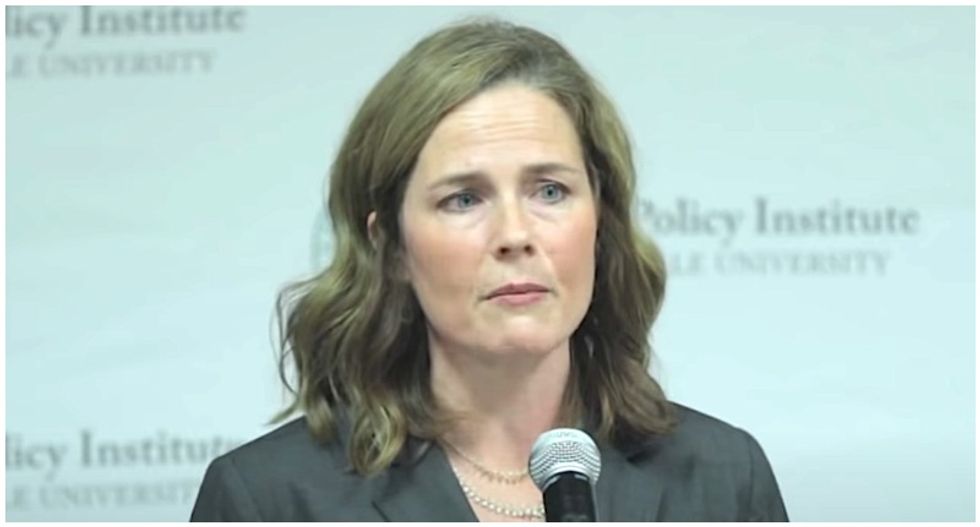 Supreme Court nominee Amy Coney Barrett has been accused of "unconscionable cruelty" by a watchdog group over her role in an appellate court decision overturning a district court which found a Wisconsin county liable for millions in damages to a woman who alleged she had been repeatedly raped by a jail guard.

"After a 19-year old pregnant prison inmate was repeatedly raped by a prison guard, Amy Coney Barrett ruled that the county responsible for the prison could not be held liable because the sexual assaults fell outside of the guard's official duties. Her judgment demonstrates a level of unconscionable cruelty that has no place on the high court," Kyle Herrig, president of the progressive watchdog group Accountable.US, told Salon. "The only thing more concerning than the rush to confirm by Senate Republicans is what we are learning about Amy Coney Barrett's extremist record. It is hardly surprising that she has dodged question after question during her testimony."

Barrett was one of the three judges on a Seventh Circuit Court of Appeals panel which reversed a $6.7 million verdict against Milwaukee County in 2018 after a corrections officer was charged with repeatedly raping a pregnant 19-year-old inmate.

Former corrections officer Xavier Thicken was charged with multiple counts of sexual assault in 2013 after the woman alleged that he had raped her during and after her pregnancy at a jail run by the controversial former Sheriff David Clarke. Those charges were dropped when he agreed to plead guilty to felony misconduct in public office in 2014.

The woman later filed a lawsuit against Milwaukee County. In her testimony, she alleged that Thicklen had raped her in different parts of the jail when she was eight months pregnant and demanded that she perform oral sex on him after giving birth.

A jury awarded the woman $6.7 million in 2017, which was upheld by District Judge J.P. Stadmueller before the Seventh Circuit Court overturned the ruling in September 2018.

Barrett joined Judges Daniel Manion and Robert Gettleman in reversing the district court ruling against the county, though it upheld the judgement against Thicklen. Mannion wrote in the unanimous opinion that the county was not responsible for the guard's conduct.

"Conduct is not in the scope if it is different in kind from that authorized, far beyond the authorized time or space, or too little actuated by a purpose to serve the employer," he said.

"Even when viewing the evidence in the light most favorable to (the woman) and the verdict, we hold no reasonable jury could find the sexual assaults were in the scope of his (Thicklen's) employment," the opinion stated. "The evidence negates the verdict."

Manion noted that the training materials stated guards were prohibited from having sex with inmates.

"The undisputed facts and reasonable inferences point ineluctably to the conclusions that Thicklen's abhorrent acts were in no way actuated by a purpose to serve county," he wrote. "He raped (the inmate) for purely personal reasons, the rapes did not benefit county but harmed it, he knew the rapes did not serve county, and the rapes were outside the scope."

With the ruling, the judge acknowledged that the woman "loses perhaps her best chance to collect the judgment. But (the law) does not make public employers absolute insurers against all wrongs."

In a similar case this year, however, Barrett joined a majority of the full Seventh Circuit Court to find that Wisconsin's Polk County was liable in a case where a jail guard sexually assaulted five women hundreds of times.

The case was filed after former prison guard Daryl Christensen was convicted of sexually assaulting the women hundreds of times over three years in 2016. Two of the victims, identified as J.K.J. and M.J.J., sued Christensen and Polk County in federal court, according to Courthouse News.

A complaint filed by one of the women alleged that the Polk County Sheriff's Department was liable, because it failed to protect her from Christensen and chose not to accept state-provided training materials on prison rape.

The lawsuit largely echoed the allegations in the criminal complaint, accusing Christensen of leading women inmates to areas of the jail where there were no security cameras before digitally penetrating them and forcing them to perform oral sex on him.

Christensen was sentenced to 30 years in prison, and a jury awarded the women $11.5 million in compensatory and punitive damages, according to Courthouse News. Polk County was ordered to pay $4 million of the award, which the outlet noted was "the only part of the award the women will ever possibly receive."

A split three-judge Seventh Circuit Court panel overturned the ruling against the county last year, with the majority arguing that it should not be held liable for actions taken by a "rogue guard" in violation of the jail's policy.

The full court voted to rehear the case in December, and it voted 7-4 to hold the county responsible in May. Barrett joined the majority.

"The jury was furnished with sufficient evidence to hold Polk County liable not on the basis of Christensen's horrific acts but rather the county's own deliberate choice to stand idly by while the female inmates under its care were exposed to an unmistakable risk that they would be sexually assaulted — a choice that was the moving force behind the harm inflicted on J.K.J. and M.J.J.," Judge Michael Scudder wrote in the majority opinion.

Scudder added that "the jury was entitled to conclude that if Polk County had taken action in response to the glaring risk that its female inmates' health and safety were in danger, J.K.J. and M.J.J.'s assaults would have stopped sooner, or never happened at all."

Barrett penned an influential decision last year which made it easier for college students accused of sexual assault to sue their universities over the handling of investigations.

She wrote the decision for a Seventh Circuit panel which ruled that Purdue University might have discriminated against a male student accused of sexual assault when it suspended him for one year, costing him a spot in the Navy ROTC program.

"It is plausible that [university officials] chose to believe Jane because she is a woman and to disbelieve John because he is a man," Barrett wrote in the decision.

Barrett said the discrimination claim was plausible, in part because the Obama administration had pressured schools to prioritize sexual assault investigations and later opened two investigations into Purdue.

"The Department of Education made clear that it took the letter and its enforcement very seriously," Barrett wrote. "The pressure on the university to demonstrate compliance was far from abstract."

Emily Martin, the vice president for education and workplace justice at the National Women's Law Center, expressed concerns that Barrett's description of the Education Department's efforts to go after campus sexual assault was evidence of discrimination against men.

Martin told The Washington Post that late Justice Ruth Bader Ginsburg was a champion of women's rights and lamented the prospect of "replacing someone like that with a judge who is eager to use the language of sex discrimination in order to defend the status quo and to use the statutes that were created to forward gender equality as swords against that very purpose."

Beth Barnhill, the executive director of the Iowa Coalition Against Sexual Assault, penned an op-ed this week warning that Barrett "holds extreme positions on areas of the law on which victims of sexual assault depend."

"Survivors want and deserve a Supreme Court that works for all of us, yet a previous ruling from Barrett made it easier for students who are held accountable for sexual assault to sue their schools for sex discrimination," Barnhill wrote. "She suggested that a school's commitment to taking sexual misconduct seriously is evidence of sex discrimination against the people who caused harm. This is deeply problematic and troubling for survivors."