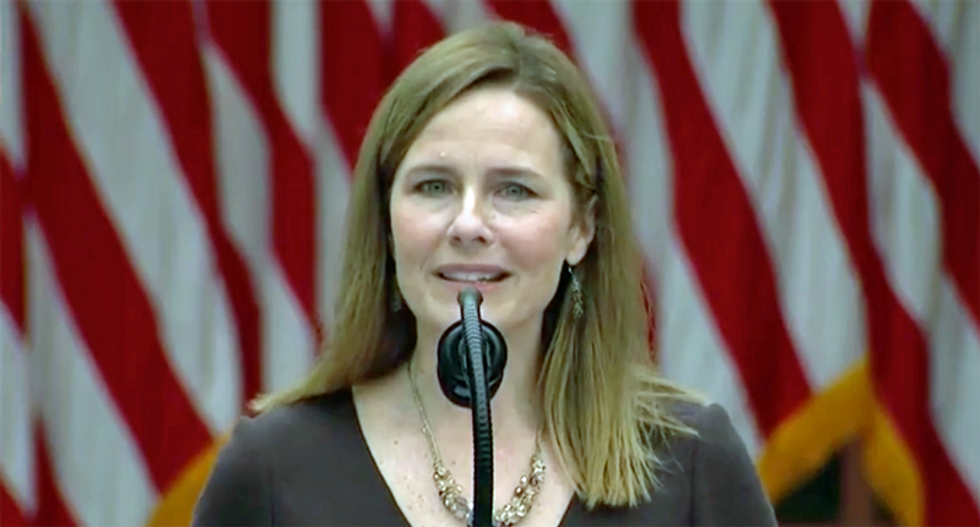 On Thursday, the Associated Press reported that People of Praise, the controversial faith group linked to Trump's Supreme Court nominee Amy Coney Barrett, have quietly scrubbed references to her from their website.

"An analysis by The Associated Press shows that People of Praise erased numerous records from its website during the summer of 2017 that referred to Barrett and included photos of her and her family. At the time, Barrett was on Trump’s short list for the high court seat that eventually went to Justice Brett Kavanaugh," said the report. "Last week, when Barrett again emerged as a front-runner for the court, more articles, blog posts and photos disappeared. After an AP reporter emailed the group’s spokesman Wednesday about members of Jesse Barrett’s family, his mother’s name was deleted from the primary contact for the South Bend, Indiana, branch. All issues of the organization’s magazine, 'Vine and Branches,' were also removed."

The group's spokesman, Sean Connolly, confirmed that references are being purposefully removed “in consultation with members and nonmembers from around the country who raised concerns about their and their families’ privacy due to heightened media attention.”

People of Praise, which combines elements of Catholicism with the baptismal traditions and tongue-speaking rituals of Pentecostalism, has drawn scrutiny for demanding its members take a loyalty oath, calling its female leaders "handmaidens," and teaching that women are divinely obligated to submit to male authority.

Republicans have broadly tried to portray scrutiny of Barrett's ties to People of Praise as "anti-Catholic," even though the group's membership is not exclusively Catholic and its practices are considered fringe by mainstream Catholic authorities.

Barrett, a right-wing "originalist" who currently sits on the Court of Appeals for the Seventh Circuit, has denied that her ties to this group, or her religious beliefs generally, will influence her interpretation of constitutional law on the bench.