President Donald J. Trump cancelled his second debate against political challenger Joe Biden and opted for a town hall forum instead – and now, researchers are starting to understand why. Voter expectation ratings of Trump’s first presidential debate against Biden dropped by 18 percentage points – to 33 – while Biden’s remained closer to expectations at 46 percentage points. The debate literally caused pollsters to confirm that not only did Trump fail… he “belly-flopped.”

“Few presidential debates make that much difference. This one apparently did,” said Bob Shrum, director of the USC Dornsife Center for the Political Future. “In the eyes of voters, Donald Trump belly-flopped into an empty swimming pool. The first, and perhaps only, 2020 debate may in the end do more to shape the ultimate outcome of the race than any debate since the first Kennedy-Nixon face off in 1960.”

New data from the USC Dornsife College of Letters, Arts and Science’s Daybreak Poll reveals that in the days following the first debate, Trump’s voter ratings dropped in the areas of mental and physical fitness as well. Biden’s, on the other hand, went up.

According to research data in the poll, panelists were asked before the Sept. 29 debate to rate their expectations for Trump’s and Biden’s performances on a scale of 0 to 100. “Pre-debate expectations were nearly identical: 51 for Trump and 50 for Biden. Post-debate performance ratings show that neither candidate met the relatively low expectations of voters overall, but Trump significantly underperformed,” researchers found. 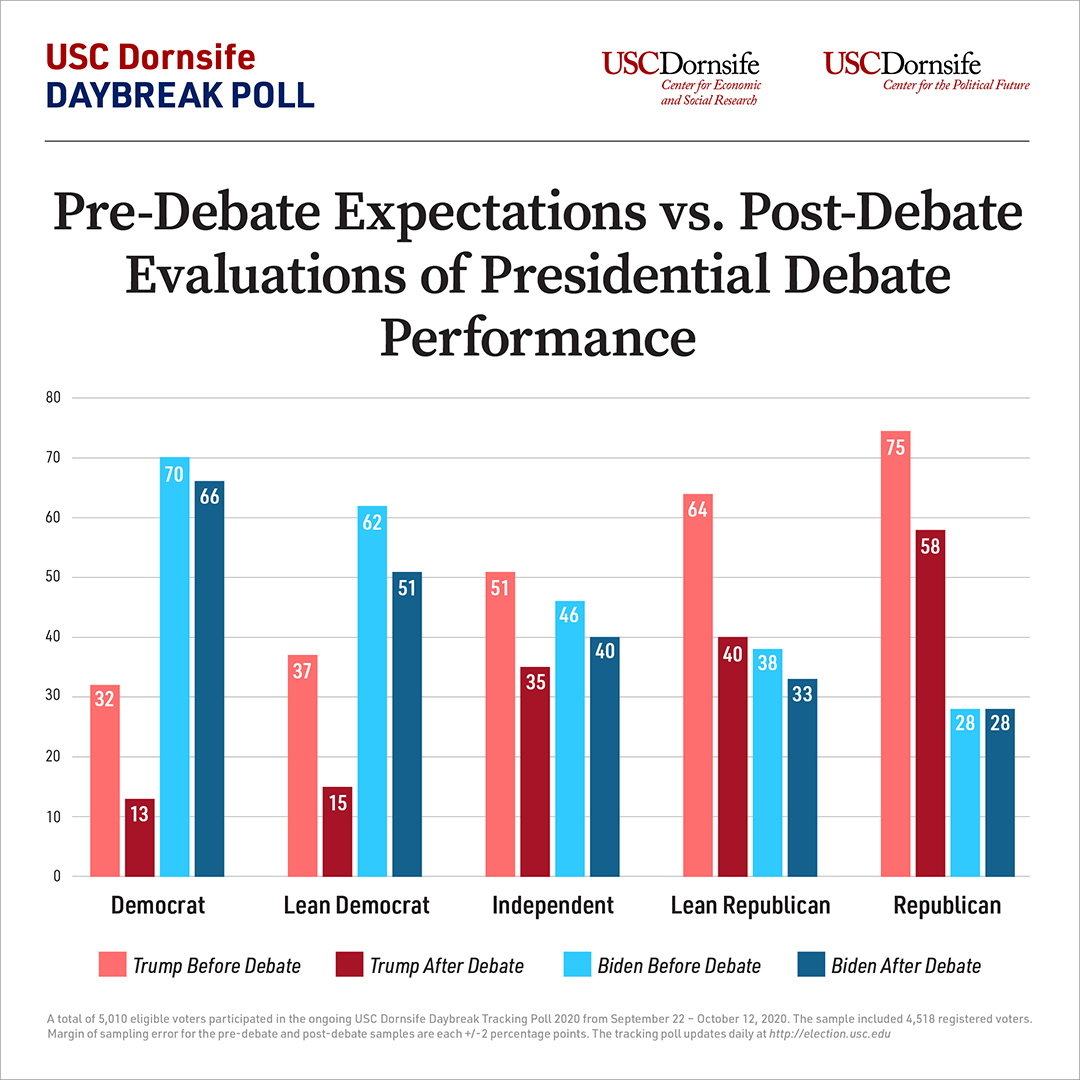 Additional data showed that voter concern about fraud is particularly high among Trump supporters with 84 percent believing that voting by mail would lead to fraud, compared to one-third of Biden supporters on the same subject. More than 8 in 10 Trump voters said mail-in voting increases the chance votes will be lost. Just over half of Biden voters felt the same.

“A majority of voters agree that voting by mail increases voter safety during the pandemic and provides greater opportunities for everyone to vote,” said Jill Darling, survey director of the Daybreak Poll. “Yet concerns about mail voting and precinct fraud — instances of which are very rare, according to multiple studies — are now top-of-mind for some voters,particularly Trump supporters. That said, the majority of votes cast for Donald Trump so far have been by mail.” 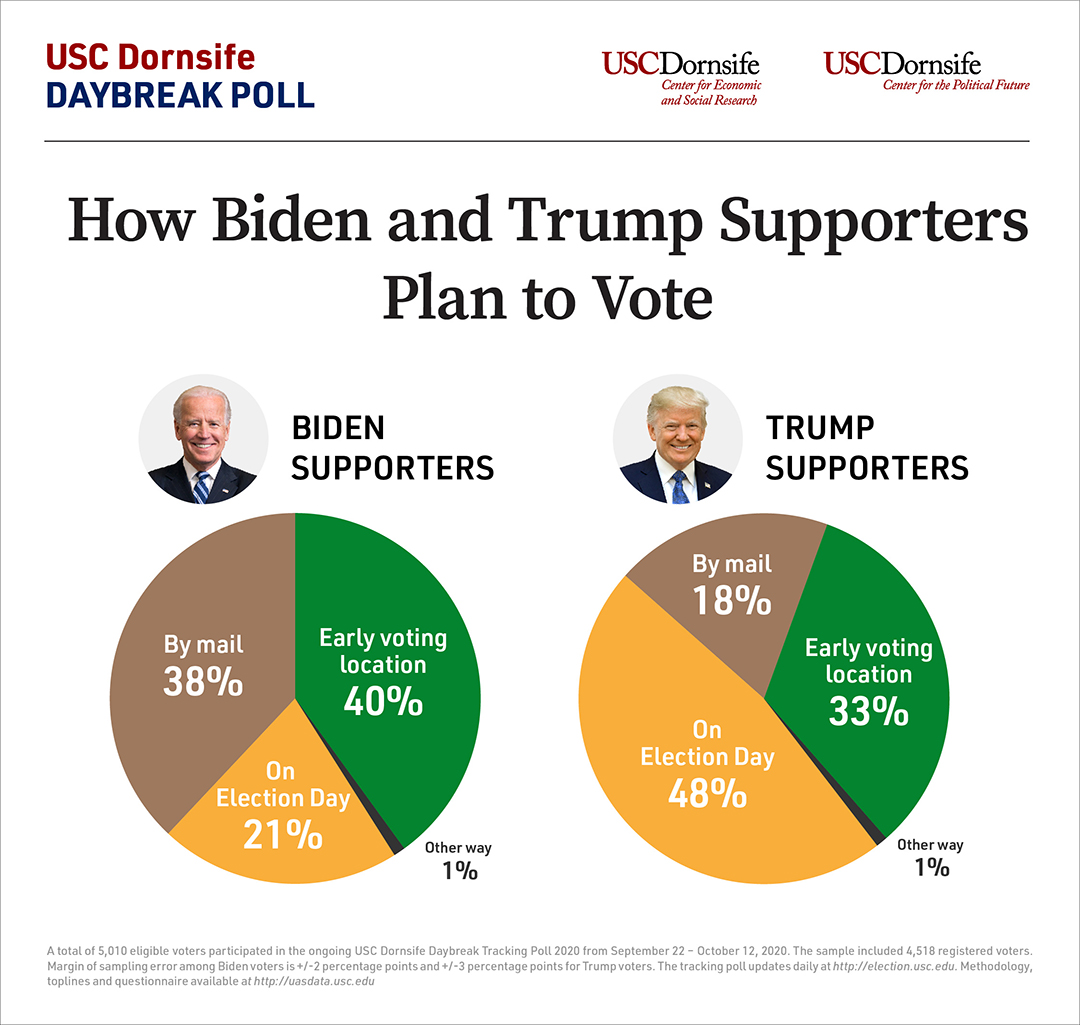 The national probability poll was conducted online from Sept. 22 to Oct. 12 by the USC Dornsife Center for Economic and Social Research (CESR) among 5,010 eligible voters who are members of CESR’s Understanding America Study panel. The poll has a margin of sampling error of +/- 1 percentage points for all voters and +/- 2 for registered voters.

The USC Dornsife Daybreak Poll 2020 is conducted by CESR in partnership with the USC Dornsife Center for the Political Future. It is funded in part by USC Dornsife with additional funding from research grants. The tracking poll is updated daily at election.usc.edu. Press releases, graphics, toplines and other documents are available from the Center for the Political Future and from CESR’s elections data page, which also provides access to data, and additional surveys and information.

There’s a presumption at work among members of the Washington press corps that needs rethinking. That presumption is this: the Republicans, especially those in the Senate, fear the wrath of voters who have balled up their identities with the rise and fall of Donald Trump. For this reason, all the Republicans, with rare exception, stand in silence while the president prosecutes what must be called an attempted coup d’etat.

A white woman was caught on video admitting that she stole a sign because it was "disrespecting" President Donald Trump.

The video begins as a Black man confronts the white woman, who has covered her license plate to prevent from being caught.

"You're sorry for what?" the man asks.

After the woman seemingly admits that she had taken the sign, the man asks her to "put it back."

As President-elect Joe Biden announces more picks for his incoming administration, it is quite obvious that the former vice president will have a very different governing style from President Donald Trump. The Biden/Trump contrasts are the focus of an Associate Press article published on November 21 — and according to AP reporters Jill Colvin, Steve Peoples and Jonathan Lemire, White House staffers are terrified of offending or upsetting Trump during this lame-duck period.

Historian: There’s only one way to move on from Trump — and Trumpism

Republican pollster: Trump’s attitude over the next six weeks may hurt GOP chances of keeping Senate

Doctor’s horrifying warning on COVID-19: ‘Unless we have a smart Thanksgiving we’re going to have a sad Christmas’